Rodents are the single biggest group of mammals with about 1500 species recorded. The most known rodents are rats and mice, but there are giant rodents spread in different ecological zones and regions, around the world. These giant rodents are at times eaten by humans as food in their respective regions. Giant rodents largely feed on plants but some also are omnivorous.

The capybara is the world’s largest rodent, and is native to South America in regions like northern Argentina, south Venezuela, east of Andes, and Colombia. Its head and body length range between 1.06 to 1.34 meters, the shoulder height is 50 to 62 centimeters, and it can weigh from 35 to 66 kilograms according, to ARKive Initiative studies. The capybara has a blunt head, snout, short partially webbed legs, and a little tail. Its fur coating can be dark brown, reddish, and yellowish brown, with black specks on face, rump, and the outer surface of the limbs. It feeds on grass, grains, fruits, and aquatic vegetation like hyacinth since it’s an adept swimmer. The capybara is active in the morning and evening and lives in family groups with 10 to 30 animals, led by a dominant male. Capybaras achieve sexual maturity at 12 to 18 months, after mating in the water, and they give birth after 150 gestation days to up to 8 young ones. 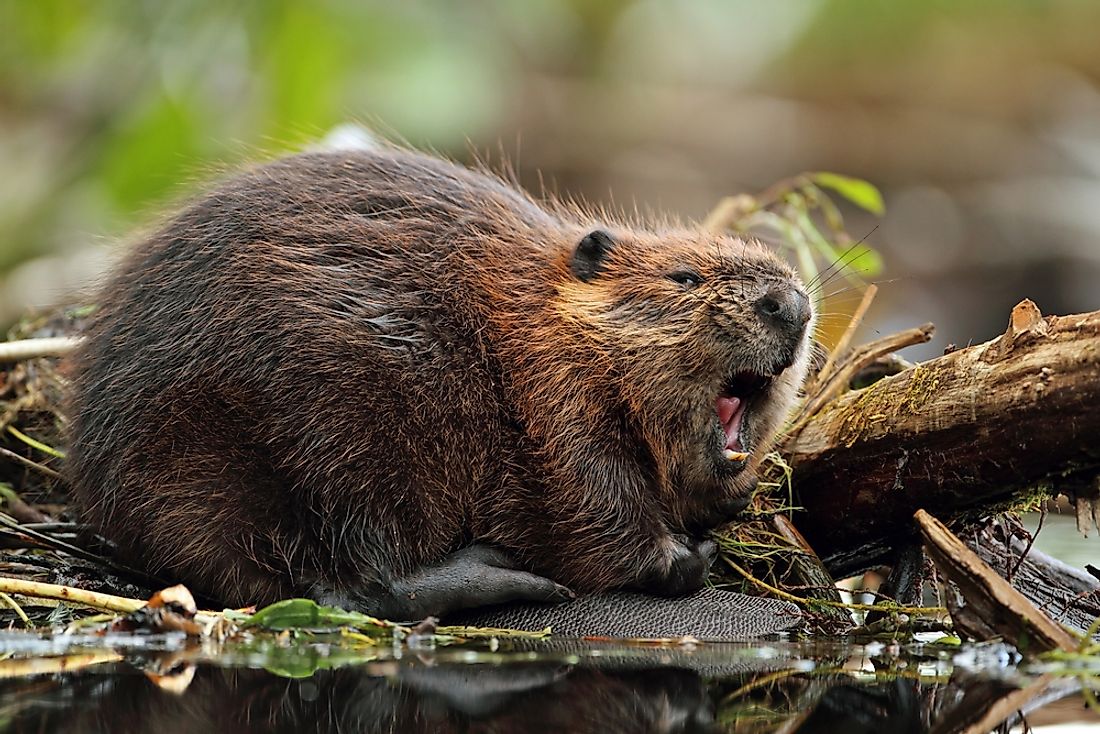 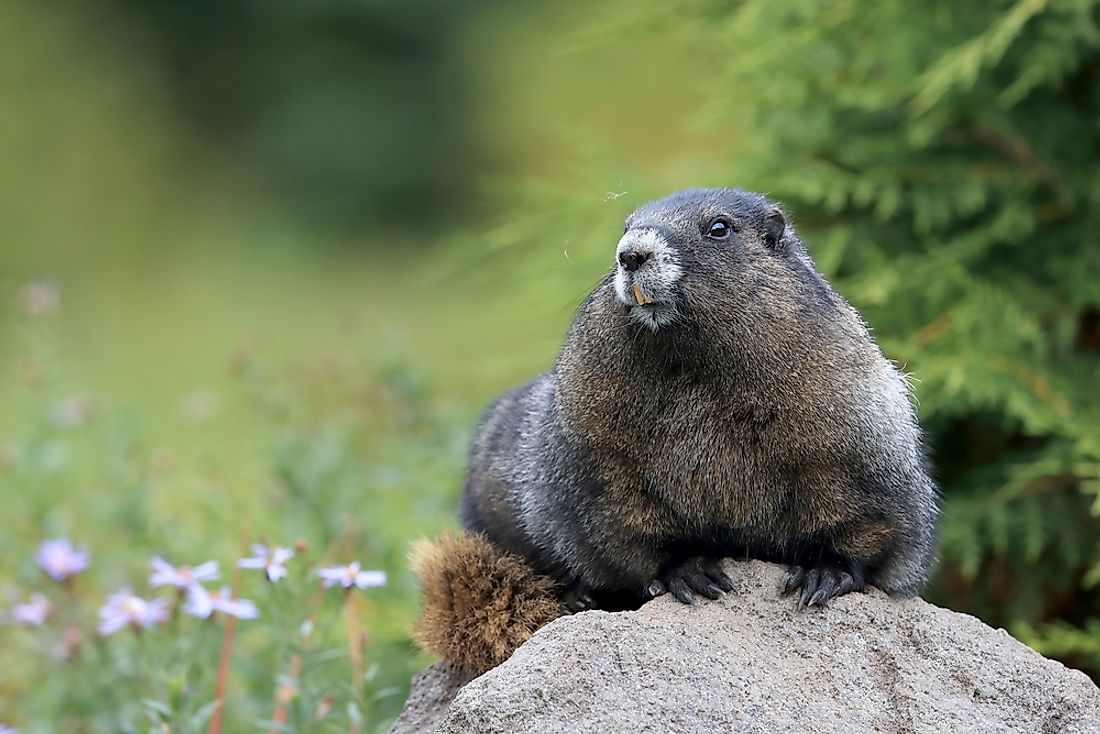 The Hoary Marmot is the largest member of the North America squirrel family. It is found in the Alpine regions of Alaska, northern Oregon, Montana, and parts of Idaho. The Hoary Marmot weighs between 2.5 to 4.5 kilograms, and its body length reaches 76 centimeters at full maturity, according to Alaska Department of Fish and Game. The Hoary Marmot has short legs, small round ears, and a densely furred tail. Its front paws are clawed to aid in digging burrows, and its fur coat ranges from white, silver, to grayish brown, and has a reddish tail. The Hoary Marmot feeds by foraging on grass, berries, flowering plants, roots, mosses, and lichen. It mates once a year and females give birth to 3 to 8 young ones after a 5 week gestation period. Hoary Marmot lives in colonies led by a dominant male, several breeding females, and their young ones plus minor males. They wrestle each other and whistle when predators like eagles, foxes, and coyotes are in the vicinity to scare them off and alert their colonies. A Hoary Marmot has a lifespan of 13 to 15 years. 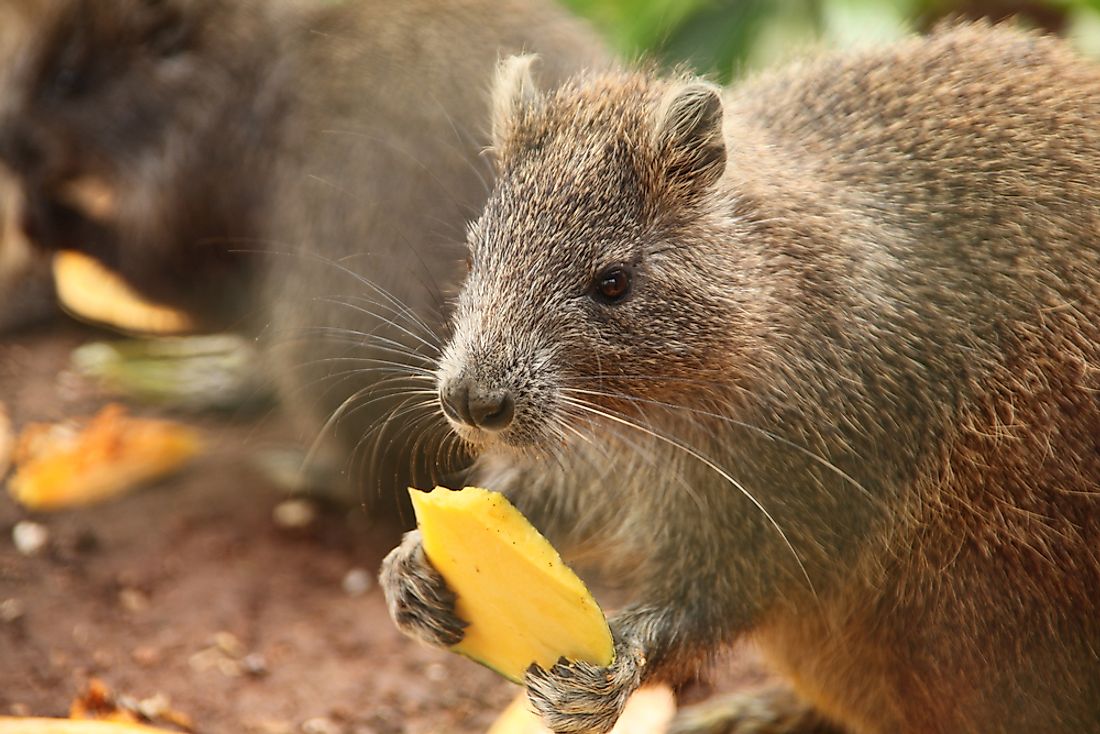 Desmarest’s Hutia also called the Cuban Hutia, is the largest of hutia species. This stocky omnivorous rodent is native to habitats like montane cloud forest, arid coastal semi-deserts, semi-deciduous forests, mountains, and marshy areas in Cuba, according to Animal Diversity studies. The Desmarest Hutia length from head to body is between 46 to 60 centimeters, with a tail length of 15 to 30 centimeters. Its body weight reaches up to 8.5 kilograms. The thick and coarse fur has shades of black, gray, brown, red, yellow, and cream, and the thin tail is covered with hair. Desmarest’s Hutia has short legs and broad feet with five clawed toes. Its diet comprises of leaves, fruit, barks, lizards and tiny animals. Desmarest’s Hutia live in pairs or small groups, and at night they rest in hollowed rocks and trees. Males and females mark their territory with urine and reach sexual maturity at 10 months. Desmarest’s Hutia gives birth all year, after a gestation period of 120 to 126 days, to 2 to 3 cubs; and have a lifespan of 11.3 years while in captivity.

Gambian Pouched Rat is one of the world’s largest rats with a 41 centimeter conspicuous long white tipped tail. On its cheeks it has pouches that are mostly used to carry food. From nose to the tail tip, a mature Gambian pouched rat measures 75 centimeters. A male Gambian Pouched rat weighs on average 1.3 kilograms, and a female 1.2 kilograms, according to Kruger National Park studies. This rat species is spread along the coastal west and east Africa, central Africa, northern eastern tip of South Africa, and southern Angola. In these regions Gambian pouched rat population is found in forests, woodlands, farmlands, and even suburb sewers, according to the International Union for Conservation of Nature (IUCN). The Gambian Pouched Rat has long dark whiskers, and the fur is grayish white, with a paler under belly. Its tiny eyes are surrounded by a black eye patch, and its front small hands are whitish and the rear legs purplish. Gambian pouched rat is omnivorous and feeds on plants as well as insects like termites, and fruits. After mating, it has a gestation period of 27 days after which it gives birth to two to four young ones, who leave the nest after three months.The Gambian Pouched rat is nocturnal, and leads a largely solitary life except when breeding. In some African countries, this rat has been trained and used to sniff out dangerous land mines.

Conservation Status Of The Largest Rodents

Unlike other endangered mammals the aforementioned rodents do not face any threat. The IUCN redlist lists them as of least concern. That is in part to their resilience to their environment and their high breeding rates.

What is the World's Largest Rodent?

The capybara is the world’s largest rodent, and is native to South America in regions like northern Argentina, south Venezuela, east of Andes, and Colombia. Its head and body length range between 1.06 to 1.34 meters, the shoulder height is 50 to 62 centimeters, and it can weigh from 35 to 66 kilograms.

Largest Rodents in the World