The Suez Canal, mostly man made, connects the Mediterranean Sea to the Red Sea through the Gulf of Suez.

The canal opened in 1869, and remains one of the planet's busiest shipping lanes. Through it the vast percentage of Europe's energy needs are transported from the Middle East oil fields.

This vital corridor of commerce has been closed due to war twice. The most recent closing occurred during the Six-Day War (in 1967), a brief war between Israel and its Arab neighbors.

A terrific photo by NASA: the Suez Canal. 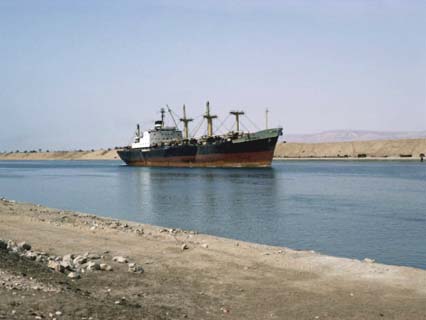 A freighter struts along the Suez Canal...
by Jack Jackson
Buy This at Allposters.com