The Norwegian Current, a branch of the Gulf Stream, pushed warm water to the north past the United Kingdom (UK), through the Norwegian Sea and on into the Barents Sea. This movement is the significant factor in the somewhat mild climates experienced by the countries and island groups in the North Atlantic Ocean and Scandinavia.

Estimating the exact size of the Norwegian Sea is based on where the sea actually ends, so all known measurements are estimates, at best. Wikipedia references a surface area of 1,380,000 sq km, while other reference sources vary some in their reported size number. Average depth runs near 1,700 meters (5,577 ft), while the maximum depth of the North Sea has been measured at 3,970 meters (13,020 ft).

The strong currents and temperate waters here keep the Norwegian Sea ice-free throughout the year. Within its waters oil and gas production are a major business for Norway and the United Kingdom (UK), and its fishing grounds are some of the most productive on the planet. 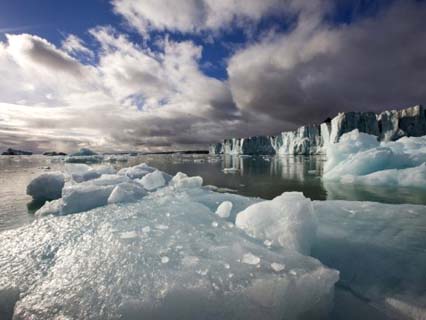 Icebergs near the Sveabreen Glacier in the Norweigan Sea...
by Paul Souders
Buy This at Allposters.com