Other bodies of water

The North Sea - a part of the Atlantic Ocean - is bordered by Norway and Denmark, Scotland and England, (and in the southeast)by the Frisian Islands and Germany, the Netherlands, Belgium and France.

Above the Shetland Islands in the north its waters merge with the Norwegian Sea.

Waters flow east-to-west into the North Sea through the Skagerrak Strait, an outlet to the Atlantic Ocean from the Baltic Sea.

The Kiel Canal in northern Germany, is one of the world's busiest artificial waterways. International sea traffic uses it to connect between the North Sea and the Baltic Sea, thus saving hundreds of miles of additional travel time around Denmark, and the related high costs of transportation.

Along the southwestern coastline of Norway, the North Sea reaches a depth of near 1,200 ft (400 m). 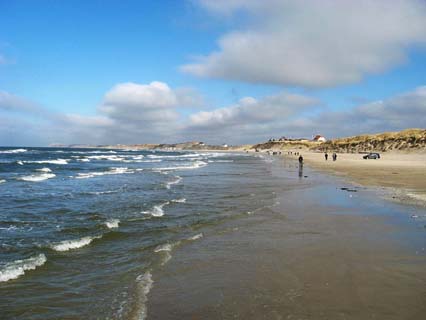 The beach at Lokken, Denmark, along the North Sea...
Tsca at en.wikipedia.