The Greenland Sea, a southern arm of the Arctic Ocean is positioned (generally) between Greenland, Iceland and Norway's Jan Mayen and Svalbard islands where it merges with the waters of the Barents Sea and Norwegian Sea.

Estimating the exact size of the Greenland Sea is based on where the sea actually ends, so all known measurements are estimates, at best. Most reference sources report a surface area near 465,000 sq miles (1,205,000 sq km).

The very cold East Greenland current flows south and carries icebergs through the Denmark Strait, and on into the Atlantic Ocean. Because of arctic ice, the northern reaches of the sea are seldom navigated by commercial vessels. 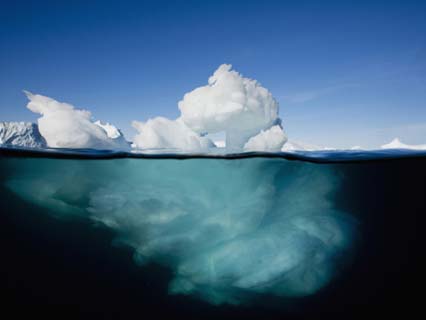 An iceberg floats across the Greenland Sea...
by Paul Souders
Buy This at Allposters.com