The East Siberian Sea, an arm of the Arctic Ocean, is located off the coastline of Siberia in far northeastern Russia.

It is bordered by the Laptev Sea and the New Siberian Islands in the west, and by the Chukchi Sea and Russia's Wrangel Island in the east.

The northern border (shown) is a mapping opinion of Graphic Maps.

This shallow sea is frozen-solid for most of the year, and only navigable during the ice-free months of August and September. 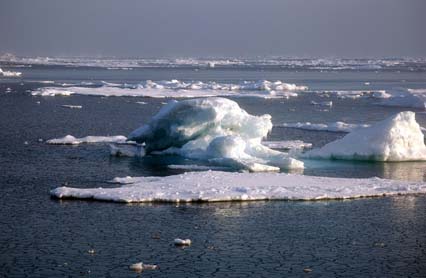 Ice in the East Siberian Sea...