The Denmark Strait, between Greenland and Iceland, is a navigational passage, 300 miles (480 km) long, and 180 miles (290 km) wide at its narrowest point.

The very cold East Greenland current passes through the strait and carries icebergs south into the Atlantic Ocean.

Greenland, the world's largest island, (after the continent of Australia) is about 81% ice-capped. Danish colonization began in the 18th century, and Greenland was made an integral part of Denmark in 1953. In 1979 it was granted self-government by the Danish parliament. Denmark still exercises control over Greenland's foreign affairs.

Iceland was first settled by Norwegian and Celtic (Scottish and Irish) immigrants during the late 9th and 10th centuries A.D., and boasts the world's oldest functioning legislative assembly, the Althing, established in 930. Independent for over 300 years, Iceland was subsequently ruled by Norway and Denmark. It gained independence in 1944 from Denmark. 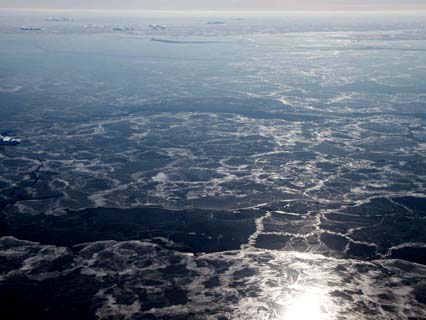 A thin layer of ice covers the Denmark Strait...