The Black Sea is an inland sea located between far-southeastern Europe and the far-western edges of the continent of Asia and the country of Turkey.

It's bordered by Turkey, and by Bulgaria, Romania, Ukraine, Russia and Georgia.

Many rivers flow into the Black Sea but the two most important include the Danube and the Dnipro.

Over many centuries the Black Sea has been of critical importance to regional commerce. Today this body of water serves as a primary highway for the transport of energy to Europe from Russia and western Asia.

This valuable economic conduit is one of the world's busiest waterways, and in 2005 over 55,000 ships, including almost 6,000 oil tankers passed through the Bosporus Strait, most carrying Russian oil. 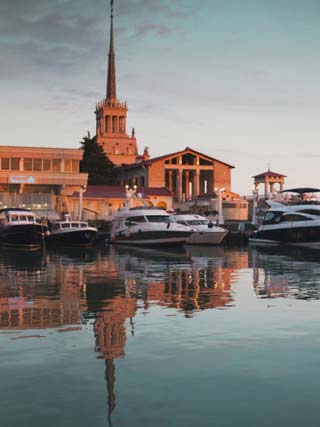 A sea terminal in Sochi, Russia, along the Black Sea coast...
by Walter Bibikow
Buy This at Allposters.com