Sydney is the state capital of New South Wales and the most populous city in Australia. The greater metropolitan area had an approximate population of 4.67 million people in 2012. Inhabitants of Sydney are called Sydneysiders, comprising a cosmopolitan and international population.

The site of the first British colony in Australia, Sydney was established in 1788 at Sydney Cove by Arthur Phillip, commodore of the First Fleet, as a penal colony. The city is built on hills surrounding Port Jackson which is commonly known as Sydney Harbor, where the iconic Sydney Opera House and the Harbor Bridge feature prominently.

The the metropolitan area is surrounded by national parks, and the coastal regions feature many bays, rivers, inlets and beaches including the famous Bondi Beach and Manly Beach. Within the city are many notable parks, including Hyde Park and the Royal Botanic Gardens.

Sydney has hosted multiple major international sporting events, including the 2000 Summer Olympics and the final of the 2003 Rugby World Cup. The main airport serving Sydney is Sydney Airport[6] and its main port is Port Botany.

Sydney Tower is Sydney's tallest free-standing structure, and the second tallest in Australia. The tower stands 309 m (1,014 ft) above the Sydney central business district, and its observation deck is a must visit. 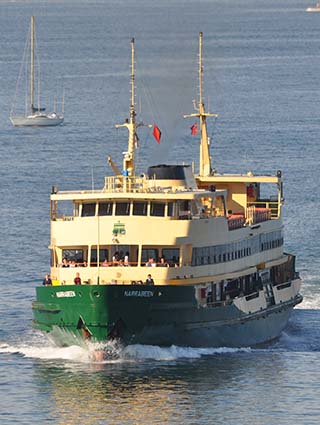 Sydney Ferries has a long and proud history in Sydney and patronage continues to grow each year. In 2011-12, 173,329 ferry services were scheduled, carrying 14.7 million passengers. 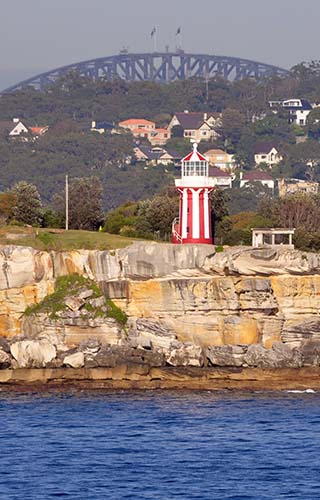 One of many Sydney Harbor lighthouses. 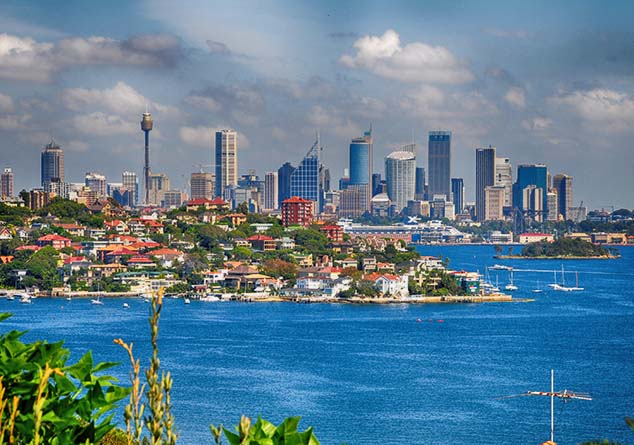 Australia's showcase city, Sydney, has one of the world's most recognizable skylines. Its famous harbor is commonly referred to as the most beautiful natural harbor in the world, and we certainly agree. That large harbor with many bays, inlets and secondary harbors, is spanned by the Harbor Bridge. The Sydney skyline is "world-class" with dozens and dozens of skyscrapers in the central business district and many more high rise buildings in the outlying neighborhoods. 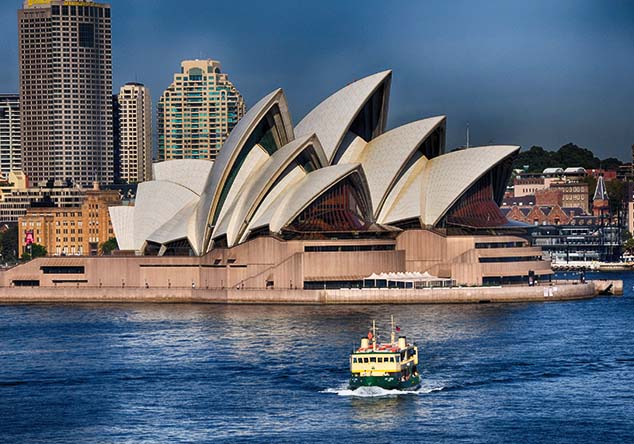 The iconic Sydney Opera House is a multi-venue performing arts center, conceived and largely built by Danish architect Jorn Utzon. Contrary to its name, it houses multiple performance venues. It is among the busiest performing arts centers in the world, hosting over 1,500 performances each year attended by some 1.2 million people. It provides a venue for many performing arts companies, including the four key resident companies Opera Australia, The Australian Ballet, the Sydney Theatre Company and the Sydney Symphony Orchestra, and presents a wide range of productions on its own account. It is also one of the most popular visitor attractions in Australia, with more than seven million people visiting each year, 300,000 of whom take a guided tour. 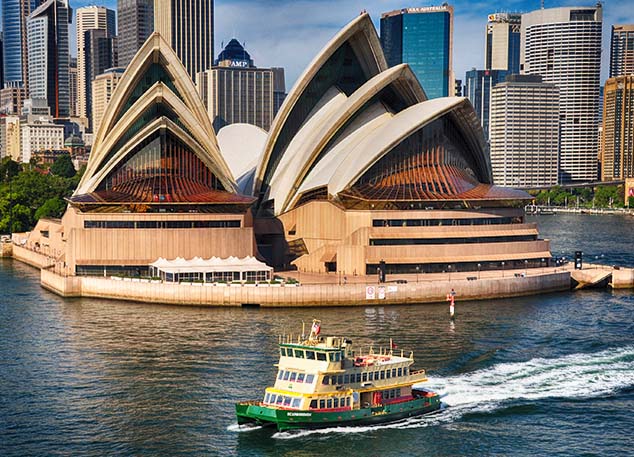 This is a closer view of the iconic Sydney Opera House. Did You Know? The precast concrete shells that form the angled roof are covered by an amazing total of 1,056,006 glossy white and cream colored tiles manufactured in Sweden and shipped to Sydney. From a distance, the shells appear a uniform white. The building's exterior is largely clad with aggregate panels composed of pink granite quarried in New South Wales. It is simply a most spectacular sight. 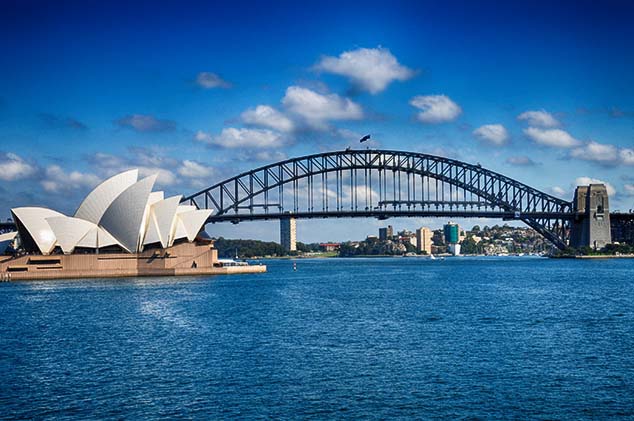 This is the Sydney Harbor Bridge, a steel arch bridge across Sydney Harbor that carries rail, vehicular, bicycle and pedestrian traffic between the Sydney central business district (CBD) and the North Shore. The dramatic view of the bridge, the harbor, and the nearby Sydney Opera House is an iconic image of Sydney, New South Wales, and Australia 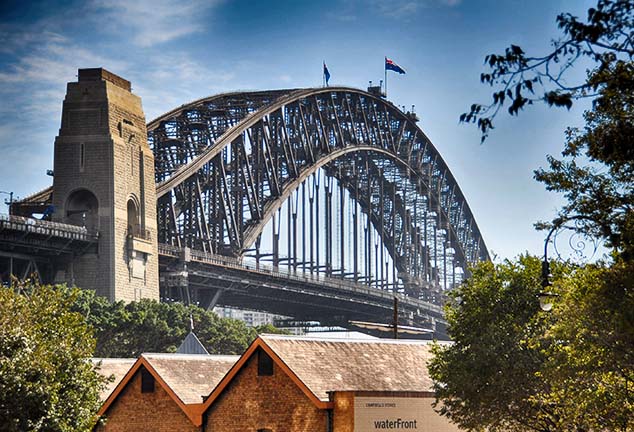 The above mentioned bridge is nicknamed "The Coathanger" because of its arch-based design. The bridge's design was influenced by the Hell Gate Bridge in New York. It was the world's widest long-span bridge, at 48.8 meters (160 feet) wide, until construction of the new Port Mann Bridge in Vancouver. It is also the sixth longest spanning-arch bridge in the world, and it is the tallest steel arch bridge, measuring 134 m (440 ft) from top to water level. 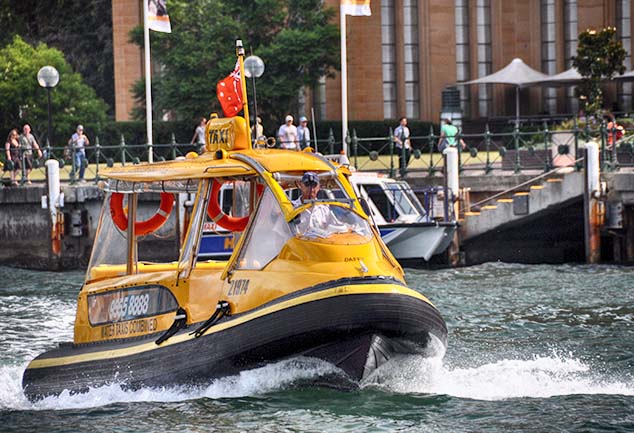 To get around quickly in Sydney, catch a water taxi in Sydney Harbor. A VIP water taxi or water limousine can also be used for corporate events, birthday parties, social functions, and even weddings.