Similar to Boston, Massachusetts, Seattle is virtually surrounded by water, and its waterfront is alive with activity. Spectacular vistas are everywhere including the Olympic Mountains, and the snow-covered peak of Mt. Rainier in the Cascade Mountains to the southeast.

Frequently cloudy with rain in the forecast, most locals and visitors could care less about umbrellas and shelter as trendy Seattle is home to many significant attractions, including the Olympic Sculpture Garden, Seattle Art Museum, Space Needle, Pike Place Market, and dozens of entertainment and shopping venues. Note: In Seattle most of the rain falls in the winter months, and perfect weather is common, June - August.

World renowned as the birth place of grunge music, tasty coffee served in innovative shops, and as a corporate base for Boeing, Microsoft and Starbucks, Seattle is a major cultural, economic and educational center, and a fabulous place to live. Frankly, it's a must visit on any Washington vacation.

Local farmers and craftspeople sell year-round in the arcades from tables they rent from the Market on a daily basis, and locals frequently stop by early in the morning to buy their fish, vegetables and flowers.

Here you can watch the market fishmongers toss around salmon, visit the first Starbucks Coffee Shop, enjoy the music and antics of street performers, and soak in the unique ambiance of Seattle's most popular attraction. This nine-acre historic district hosts over 10 million visitors each year. 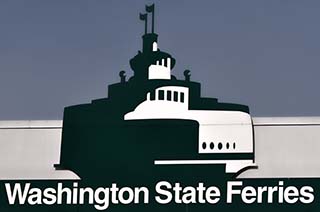 Seattle ferries are a part of life in this sophisticated city and two separate systems provide year-round ferry service.

In Seattle you can feast on the best Dungeness Crab on the west coast, and let us not forget the selection of fresh oysters. 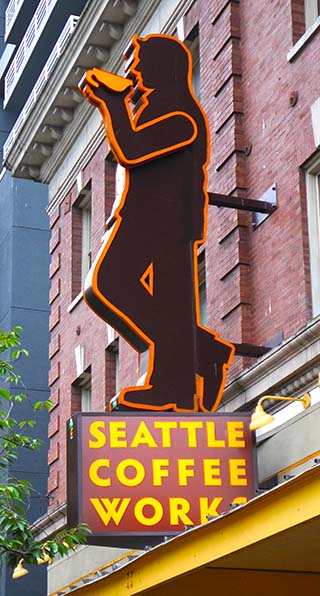 There's over 800 coffee shops in the Seattle metro.

Seattle's Space Needle is the major landmark of the city. Built for the 1962 World's Fair, it stands 605 feet (184 m) high at its highest point and 138 feet (42 m) wide at its widest point. From its observation deck, besides great views of Downtown Seattle skyline, Mount Rainier and Mount Baker come into view, as well as Elliott Bay and surrounding islands.

Smith Tower is a skyscraper in Seattle, Washington. Completed in 1914, the 38-storey, 149 m (489 ft) tower is the oldest skyscraper in the city and was the tallest office building west of the Mississippi River until 1931. It remained the tallest building on the West Coast until the Space Needle overtook it in 1962. If you want some good photos of Seattle, try the building's observation deck. 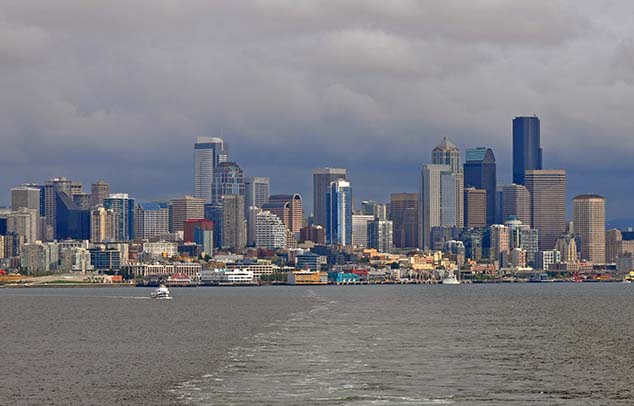 From Puget Sound this is partial view of Seattle's skyline and its many high-rises and skyscrapers. The condominiums along the waterfront are some of the most desirable places to live in the city because of their views of Puget Sound. Columbia Center (upper right) is the tallest skyscraper in the downtown Seattle skyline, as well as the tallest building in the State of Washington, and the Pacific Northwest region of North America; it is 76 stories high, and has 46 elevators. 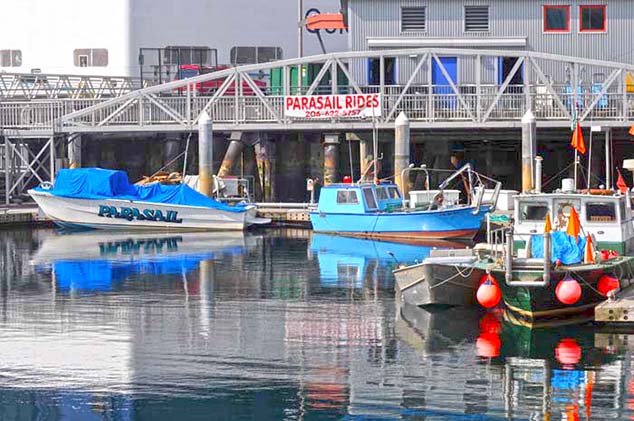 And speaking of boats (be them power or sail) Seattle is all but surrounded by water and thousands of boats of all types and sizes fill its many harbors and bays. 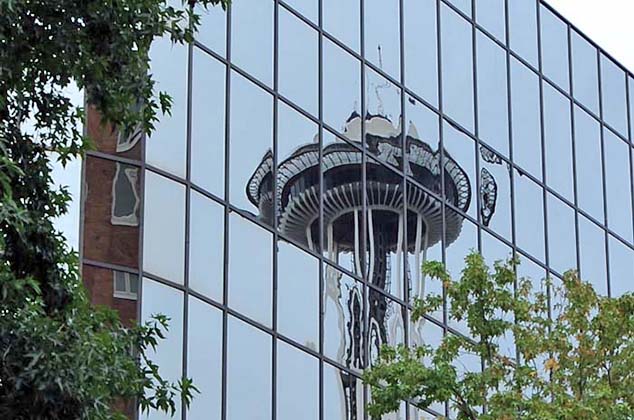 The Space Needle is a major landmark of the Pacific Northwest region of the United States and a symbol of Seattle. This is its reflection in a local office building.1 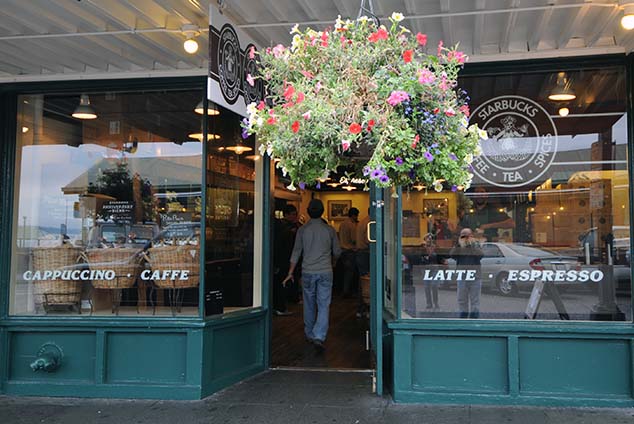 Starbucks is a global coffee company and coffeehouse chain based in Seattle, Washington. Starbucks is the largest coffeehouse company in the world, with nearly 20,000 stores in 61 countries, including over 13,000 in the United States. This is the original Starbucks in the Pike Place Market in downtown Seattle. Incidentally, there are over 400 Starbucks stores in the Seattle area alone. 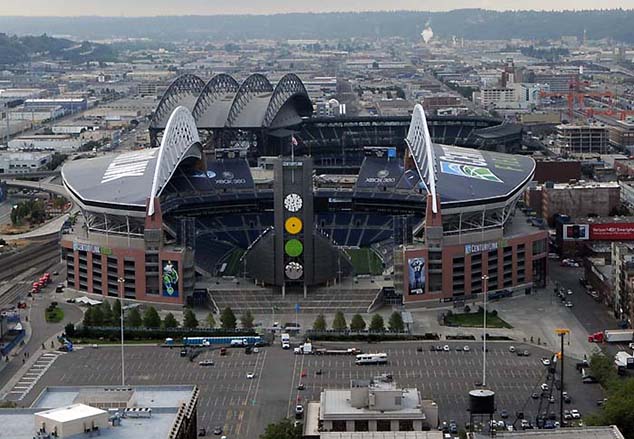 Seattle's two major sports stadium are shown here; CenturyLink Field (in the foreground) is a multi-purpose stadium that serves as the home field for the Seattle Seahawks of the National Football League (NFL) and Seattle Sounders FC of Major League Soccer (MLS). In the background is Safeco Field, a retractable roof baseball stadium that's the home of the Seattle Mariners of Major League Baseball (MLB). 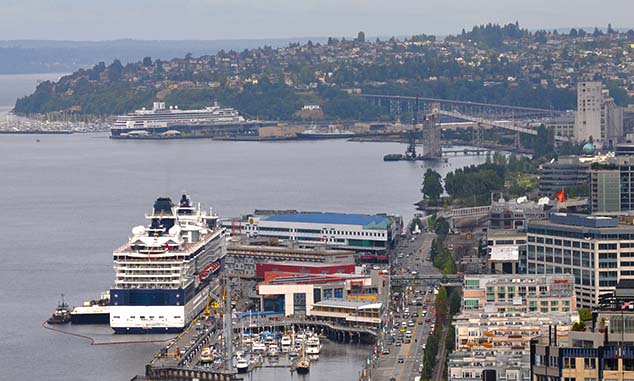 Currently leading all U.S. cruise home-ports on the West Coast in passenger volume and number of ship calls, the cruise business in Seattle is responsible for more than 4,319 jobs, $416 million in annual business revenue, and nearly $18 million annually in state and local tax revenues, (2010 statistics). Most ships out of Seattle cruise north to Alaska. 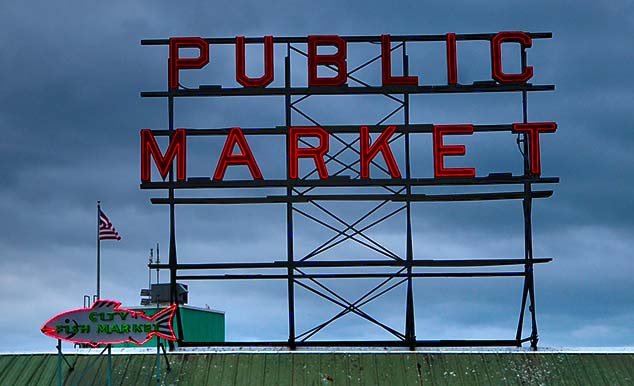 Pike Place Market is a public market overlooking the Elliott Bay waterfront in Seattle. It is one of the oldest continually operated public farmers' markets in the United States. It has a variety of unique shops such as antique dealers, comic book and collectible shops, small family-owned restaurants, and one of the oldest head shops in Seattle. The upper street level contains fishmongers, fresh produce stands and craft stalls operating in the covered arcades. 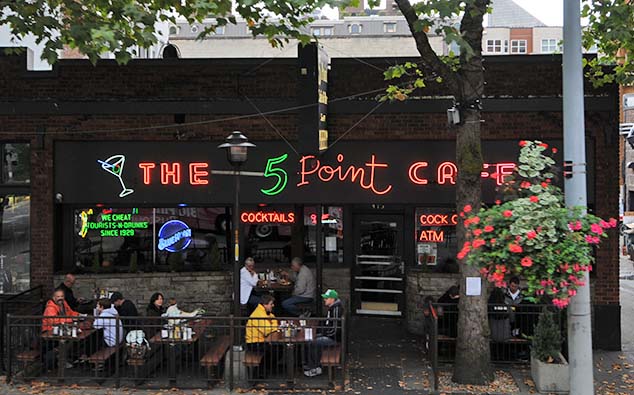 The 5 Point Cafe is a bar and 24-hour cafe and bar in the Belltown neighborhood of Seattle, Washington. It is located by Tilikum Place near a five-way intersection. Open since 1929, it is a drinking establishment that is considered the oldest in the neighborhood. The bar has received accolades from local media for being one of the best dive bars in the city. 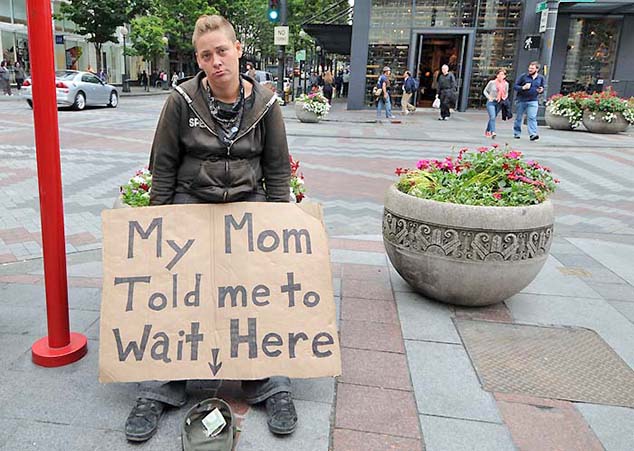 In the Seattle area, like in all major cities of the world, there are many homeless people living on the streets or in shelters. I met this woman in downtown Seattle, and I tipped her because of the innovative sign. She told me her mom's been gone for 12 years; sad, so sad.