With Columbia ablaze, plantations in ruins and over 20% of its white male population dead, South Carolina was devastated. Once dominant whites were now without money and power, and newly freed black slaves by the thousands flooded into the fragmented social system.

During the long reconstruction period southern states were all placed under military control, and African Americans were thrust into (once unthinkable) prominent roles. Regardless, much of the white population wanted no part of it, and newly liberated blacks fought hard to keep their new status.

Racial attitudes and prejudices unfortunately formed groups like the Ku Klux Klan, groups that attempted to frighten blacks through vocal hatred, intimidation and violence. White power reforms peaked in the 1890's, and many schools and public places were again segregated.

By the dawn of the 20th century, the state was on the road to economic recovery. The textile industry led the way, and new railroads helped South Carolina attract additional industries, thus new jobs and continued economic growth.

hen, in 1929, America's stock market crashed, the Great Depression took a strong hold, and South Carolina and all southern states would suffer once again. During that Great Depression the price of cotton (almost unbelievably) bottomed-out at 5 cents a pound.

World War II sparked an economic boom of sorts as war-related industries built new plants in South Carolina, and even though unemployment levels began to fall for blacks and whites, and things were looking up, debilitating racial tensions continued.

In the 1960's (finally) blacks and forward-thinking people across the south celebrated the success of the hard fought civil rights movement. Discrimination and segregation ended, and all of the state's citizens, to their credit, came together.

Frequently the target of tropical cyclones, on September 21, 1989, Hurricane Hugo, the most powerful hurricane to that date struck South Carolina. The state suffered extensive damage, especially along the coastal islands; bridges and homes were washed away, and the storm surge pushed boats 50 miles inland.

As an aggressive and resilient player in both America's past and present, this somewhat small state is renown for its antebellum homes, historical sites and southern style, especially in the aesthetically pleasing harbor city of Charleston.

Add hundreds of coastal islands and beaches, over 300 golf courses, wilderness areas, watersports of all description, and some of the country's most popular NASCAR events, and South Carolina is understandably a mecca for travelers throughout the year. 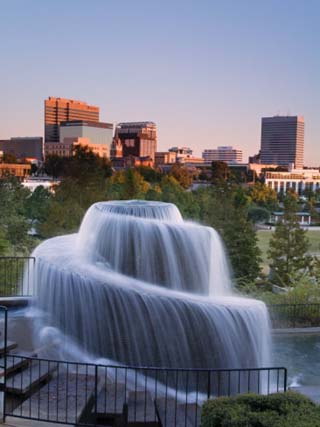 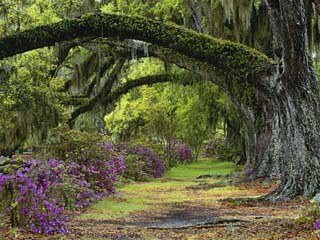 Live Oaks in Charleston, South Carolina...
by Adam Jones
Buy This at Allposters.com