. One of the most historic, influential and oldest cities in

, Boston is home to a number of cultural opportunities, historical sites and a rich variety of the performing arts.

Founded in 1630 by Puritan colonists from

, Boston was the site of Paul Revere's famous ride, the Boston Tea Party and many other events that led to the founding of the

and it still retains the flavor of those colonial days.

Fenway Park has served as the home ballpark of the Boston Red Sox baseball club since it opened in 1912 and is the oldest Major League Baseball stadium currently in use. It is one of two "classic" Major League ballparks still in use, the other being Chicago's Wrigley Field and it is considered to be one of the best-known sports venues in the United States.

The Red Sox have sold out every home game since May 15, 2003; in 2008, the park sold out its 456th consecutive Red Sox game, breaking a Major League Baseball record. 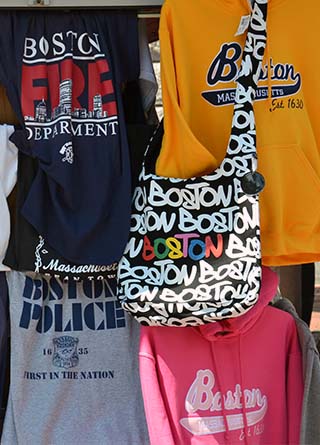 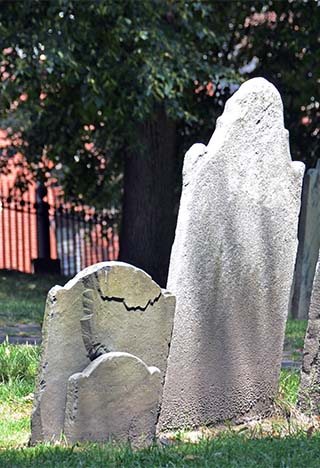 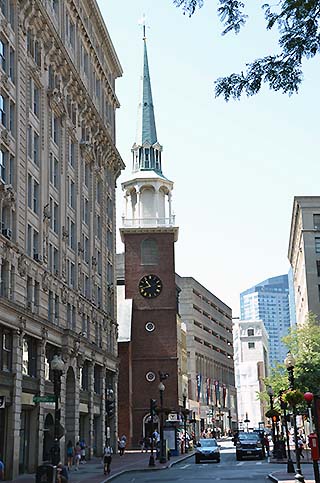 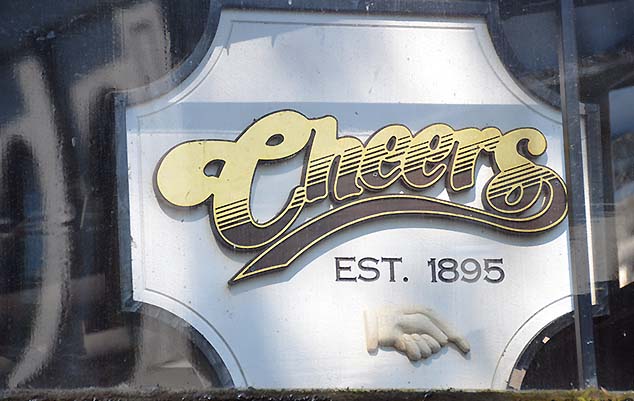 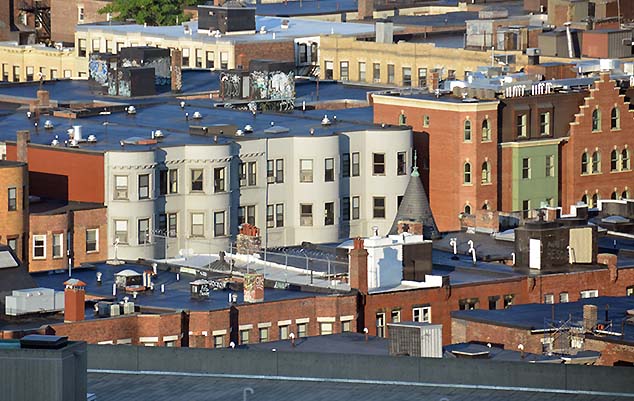 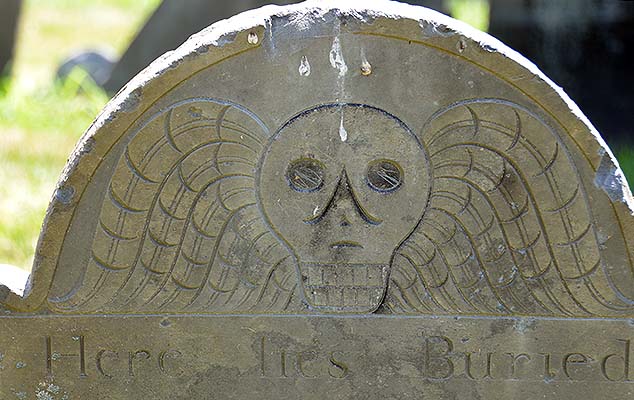 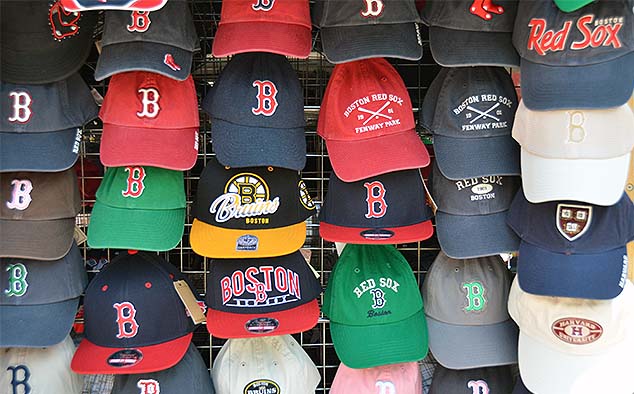 Bostom sport team hats are popular with locals and tourist alike. These were part of a much larger display in Quincy Market 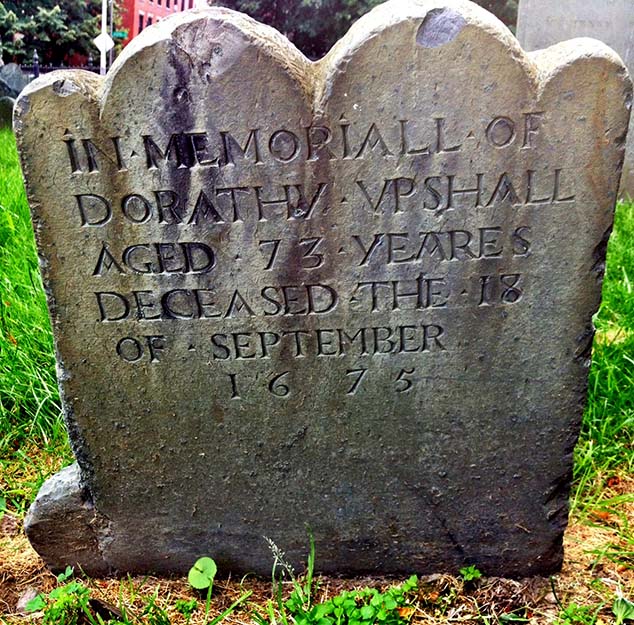 Inside the Copp's Hill Burying Ground in North Boston, Massachussets, many of the early settlers to the "New World" are buried. This woman died in 1675, a century before the American Revolution. May she rest in peace. 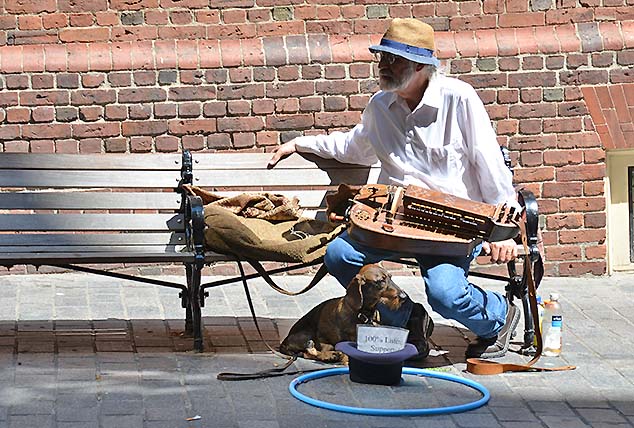 Like all large cities across the planet street entertainers ae commonly seen, and Boston is no exception. This man and his dog were both looking for customers to entertain near Fanueil Hall. 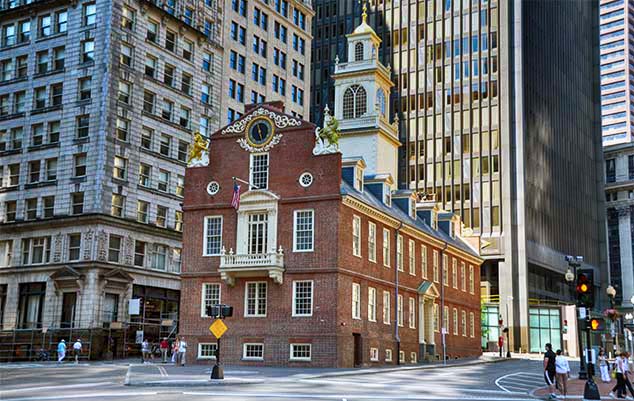 The Old State House is an historic government building located at the intersection of Washington and State Streets in Boston, Massachusetts, USA. Built in 1713, it is the oldest surviving public building in Boston, and the seat of the state's legislature until 1798. On March 5, 1770, The Boston Massacre occurred in front of the building and America's Revolutionary War was about to begin. 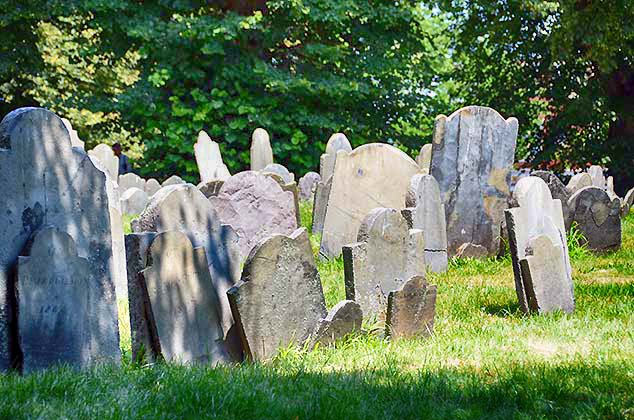 Founded by the town of Boston in 1659, Copp's Hill Burying Ground is the second oldest burying ground in the city. The cemetery's boundaries were extended several times, and the grounds contain the remains of many notable Bostonians in the thousands of graves and 272 tombs. 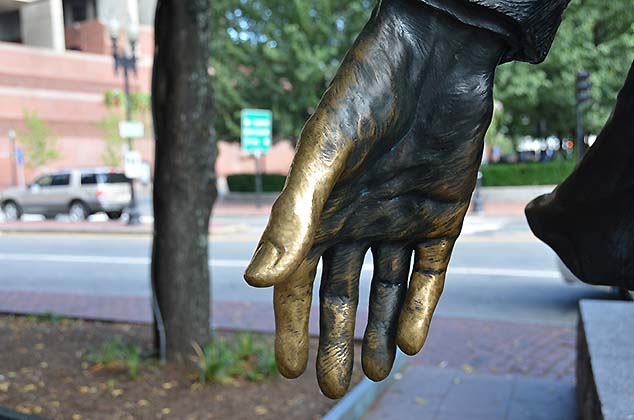 Standing near Faneuil Hall in Boston stands a 10-foot bronze statue of former mayor Kevin White. This is one of the statue's hands, and as you can see, the hand has been shaken a few times. 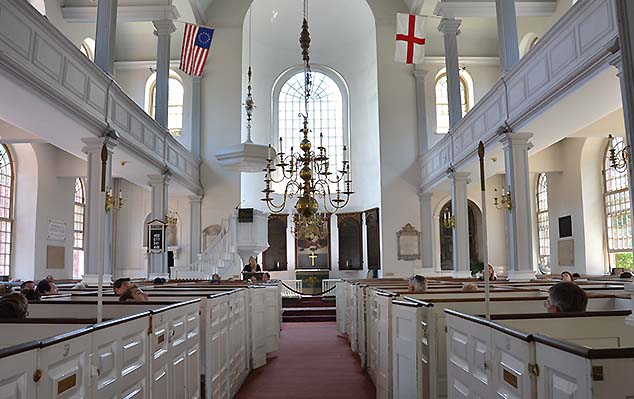 Old North Church in the North End of Boston, is the location from which the famous "One if by land, and two if by sea" signal is said to have been sent. This phrase is related to Paul Revere's midnight ride, of April 18, 1775, which preceded the Battles of Lexington and Concord during the American Revolution. This is a view of its famous sanctuary. 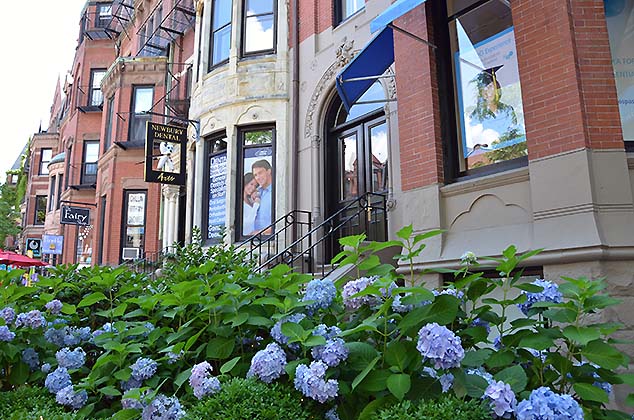 Boston's Back Bay is steeped in history. Its streets are some of many in Boston that are lined with one of the city's most iconic architectural structures, the brownstone. 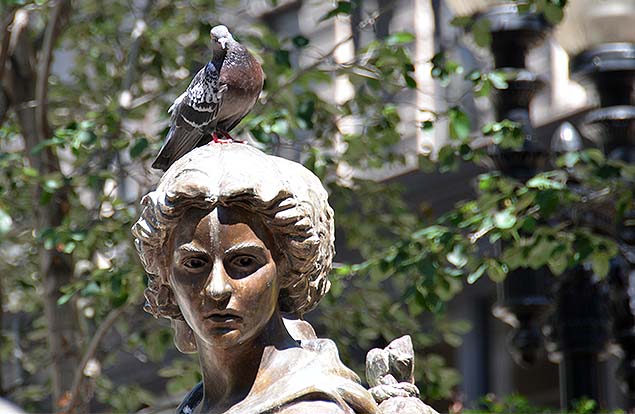 I couldn't resist taking this picture in downtown Boston. Should it be entitled, "Are you lookin at us," or maybe the messy pigeon should be saying, "I didn't do it." 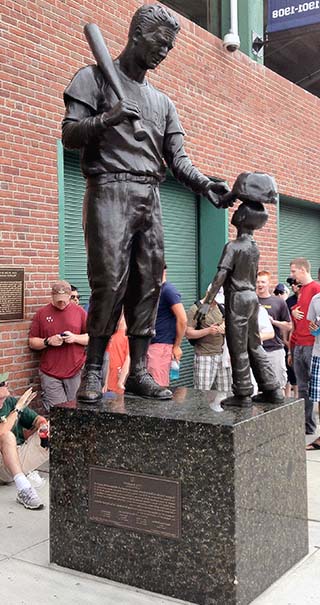 One April 16, 2004, the Red Sox unveiled the Ted Williams Jimmy Fund statue outside the Gate B entrance to Fenway Park. Crafted by sculptor Franc Talarico, the 1200-pound, eight-and-a-half foot tall statue depicts Williams placing his hat upon the head of a young boy suffering with cancer. it is a testament to the half-century of public appeals the late Hall of Famer made on behalf of Dana-Farber Cancer Institute and its Jimmy Fund — the official charity of the Red Sox. 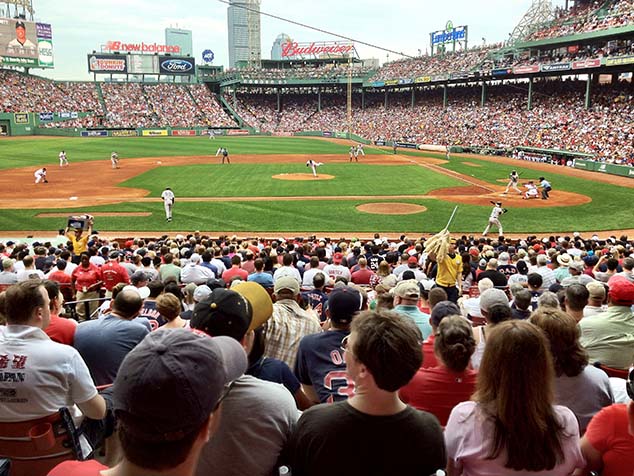 A sellout crowd was in attendance at Fenway Park, Boston, on July 7, 2012 as the Boston Red Sox played the New York Yankees in the first game of a four game series; a game that the Yankees won. 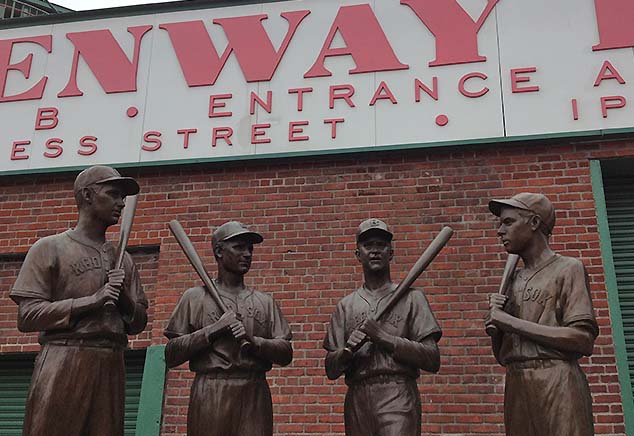 The decades-long friendship of Red Sox greats Ted Williams, Bobby Doerr, Dom DiMaggio and Johnny Pesky was immortalized in David Halberstam's classic book, "The Teammates: Portrait of a Friendship." Those friends are now on display at Fenway Park in a classic sculpture by Antonio Tobias Mendez; 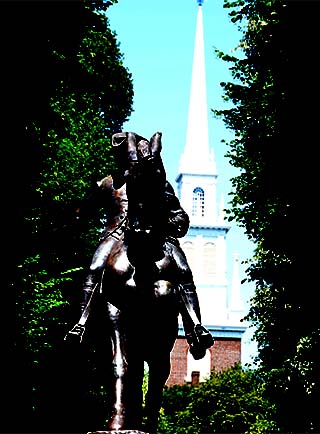 A statue of Paul Revere, Boston. 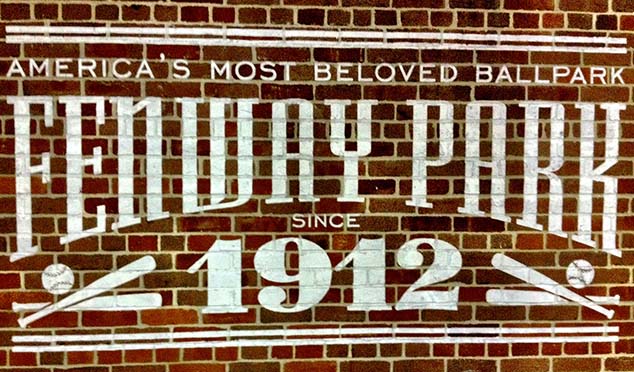 This is a classic sign at Fenway Park, the home ballpark of the Boston Red Sox baseball club since it opened in 1912. Fenway is the oldest Major League Baseball stadium currently in use. 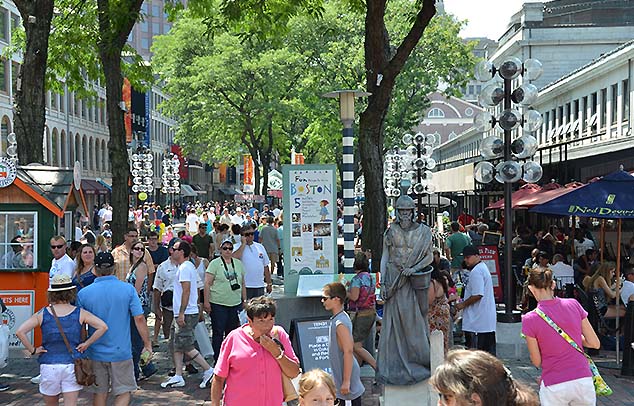 Boston's Quincy Market building continues to be a source of food and entertainment for Bostonians and visitors alike. It is a popular and busy lunchtime spot for downtown workers. 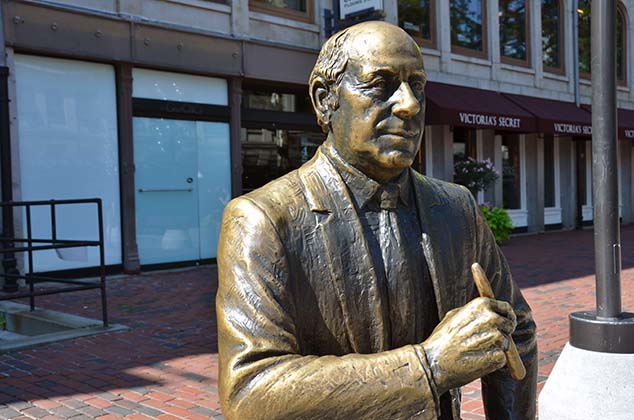 This is a statue of Red Auebach in the Quincy Market area of Boston. Auerbach was an American basketball coach, and as a coach his teams won nine National Basketball Association (NBA) championships. As general manager and team president of the Boston Celtics, he won an additional seven NBA titles, for a grand total of 16 in a span of 29 years, making him one of the most successful team officials in the history of North American professional sports. 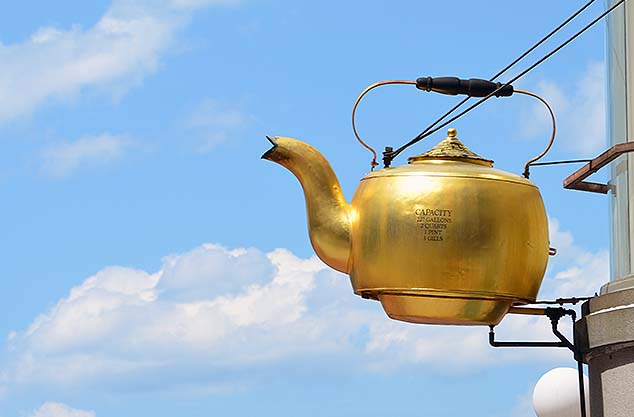 At Court & Tremont Streets (Government Center) in Boston hangs the giant tea kettle "sign" of the old Oriental Tea Company. This huge tea pot was manufactured in 1873 by a company called Hicks & Badger. The sign spent many years on the south side of Scollay Square, and was moved to varying locations in the area as buildings were torn down. The tea pot was a famous tourist attraction for many years. 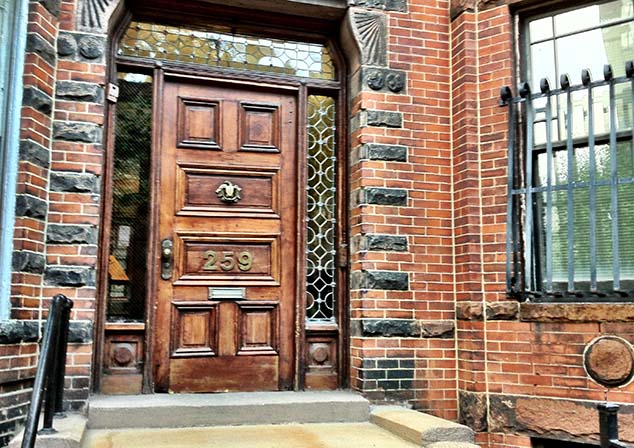 Winston Churchill once called Commonwealth avenue "the most beautiful street in the world". Boston's Back Bay is steeped in history. Its streets are some of many in Boston that are lined with one of the city's most iconic architectural structures, the brownstone; this is one of the doors on that street. 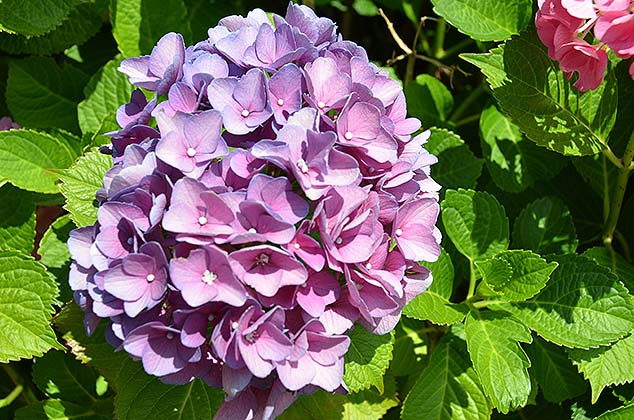 Boston Common is a central public park in Boston, Massachusetts; trees and flowers are everywhere.