You know you've entered Louisiana when you hear that languid, poetic drawl, and everything just seems to slow down a pace or two. It's time then to kick back for a bit of southern hospitality, a lazy day of cat fishing, and a bowl of spicy gumbo.

The ethnically diverse state of Louisiana is home to the proud Cajun and Creole cultures. As described above, the Cajuns are descendents of Canadian Arcadians and have their own language that mixes English and French Canadian into something completely different!

Cajun and Creole culture have thankfully produced some of the finest cooking on the planet. A Louisiana vacation is not complete without a hearty sampling of the local gumbo, catfish, crayfish, and hot sauce. Even if taking a month long holiday in New Orleans, you can visit a new restaurant three times a day, every day, and still have plenty more on the list to try.

The term 'Creole' originally described the descendents of white men and black slave women, or women of mixed heritage that were often freed by their lovers or fathers. In today's Louisiana Creole refers to those who are a mix of French, African, Native American, and Spanish heritage that were born and raised in the local Creole culture.

The state of Louisiana is bordered in the west by Texas, the north by Arkansas, the east by Mississippi, and in the south by the bountiful Gulf of Mexico. In northern Louisiana, rolling hills are crisscrossed by the Red River, as it flows through the state from the northwest to southeast. Louisiana however, is also famously defined by the Mississippi River Delta and the coastal plains. The delta and resulting bayous and swamps cover the majority of Southern Louisiana. Both New Orleans and Baton Rouge are located in this region on the banks of the river.

Louisiana is home to gas and oil refineries, with hundreds of platforms located just offshore in the Gulf of Mexico. The state is also known for the quality and variety of its shrimp, crabs, and crayfish found in the saltwater tidal flats, and for the tasty catfish of the Louisiana Bayous. Both of these industries were hit hard by Hurricane Katrina, and both now are doing well again.

Tourism is a major industry in Louisiana, and no event is more important than New Orleans's Mardi Gras, as hundreds of thousands of revelers descend on the city each year for a fabulous festival of food, drink and merry making.

Music in Louisiana means Cajun Zydeco in the country and hot Jazz in the city. The annual Essence Music Festival in July brings big names in R&B to New Orleans, like Beyonce, Usher, and Anita Baker.

The charming city of Baton Rouge is the capital of Louisiana and emanates southern style and grace. There you should visit both the new and Old State Capitol buildings and tour the gracious Magnolia Plantation for a wonderful taste of the Old South. 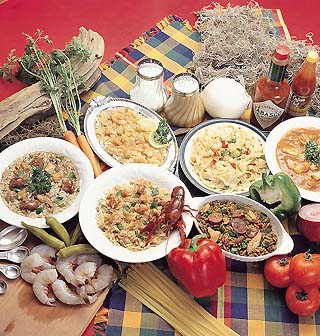 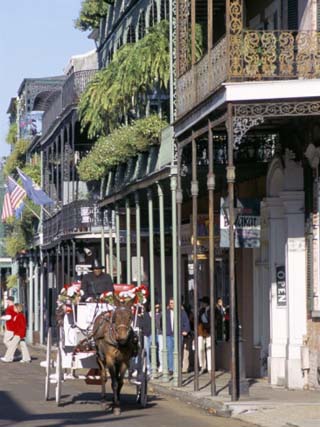 French Quarter...
by Bruno Barbier
Buy This at Allposters.com