Slavery and States' Rights long fueled the desire for independence across the south and those issues were the primary catalyst for America's bloody Civil War (1861–1865); the deadliest war in American history. It caused 620,000 soldier deaths and an undetermined number of civilian casualties..

Ironically, Kentucky was the birthplace of the Union president, Abraham Lincoln, and the Confederate president, Jefferson Davis. Regardless, strong feelings on both sides of the slavery issue, and their conflicting loyalties would tear the state apart.

As that war began Kentucky openly stated its neutrality, and asked (warned) the Union and the Confederacy not to invade. Undaunted, Confederate forces invaded and Frankfort was the only Union capital occupied by Confederate troops. With the Union Blue in hot pursuit, Kentucky witnessed several bloody engagements, including a battle near Perryville in 1862 where 1,600 died and 5,400 were wounded.

The war's Reconstruction Period was the most contentious chapter in the history of Kentucky. During an 1865 election, the state rejected the Thirteenth, Fourteenth, and Fifteenth Amendments to the U.S. Constitution (all in part) officially abolishing and prohibiting slavery, and promoting civil rights for all citizens. Shortly thereafter, the Ku Klux Klan surfaced in the state and violence against blacks continued.

In the years that followed, positive efforts favoring equal citizenship for blacks and women's suffrage surfaced in Kentucky, and across the deep south. Years later Kentucky passed the Kentucky Civil Rights Act, requiring equal employment and housing for all races.

On the economic front, the coal mining industry literally exploded into prominence in the eastern part of the state, and tobacco production increased dramatically. Though coal was in high demand during World War I, production declined dramatically after the war, and when the Great Depression (1929-1939) wreaked havoc across America, Kentuckians lost jobs by the thousands.

Similarly to Tennessee, the Great Depression of the 1930's also proved a turning point for Kentucky. Jobs were desperately needed, and during that Depression, the federal government created the TVA, or Tennessee Valley Authority. Its stated goal was to produce electricity for the rural areas, and subsequently dams were built along the Tennessee and Cumberland Rivers in Kentucky. In that effort, much-needed highways were built throughout the state and new jobs were readily available.

During World War II (1939-1945), Kentucky businesses produced weapons for the war effort and supplied food products for the soldiers. By mid-century coal mines reached record production levels, and the TVA continued its efforts across the state. Eventually, the mining of vast coal deposits, oil and gas production, tobacco, and the state's natural tourism attributes put Kentucky back on the economic map to stay.

The Bluegrass State of Kentucky is home to a wide variety of beautiful state parks, unique festivals throughout the year, and many interesting historic sites. In addition, Kentucky is the world's undisputed center of thoroughbred horse breeding, and the home of the Kentucky Derby. It's also famous for its numerous championship college basketball teams, and of course, Kentucky Bourbon. 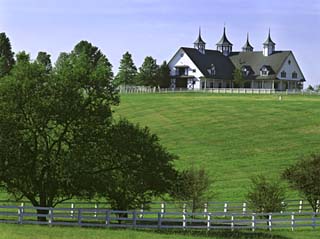 Elegant horse barn...
by Dennis Flaherty
Buy This at Allposters.com 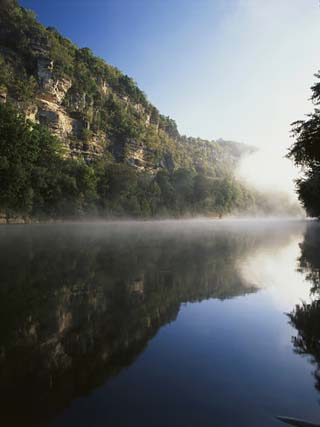 Kentucky River...
by Adam Jones
Buy This at Allposters.com