Hawaii
In modern times the U.S. State of Hawaii is certainly one of the premier travel destinations on the planet, and to quote the American author, Mark Twain, Hawaii is the loveliest fleet of islands that lies anchored in any ocean..."

That said, the first inhabitants to set foot here sometime around 500 AD, were not on holiday, but rather wandering Polynesians from the Marquesas Islands, looking for new land and new beginnings.

500 years later the Tahitians also discovered these beautiful islands, and through the entire 13th century thousands of immigrants from Tahiti made the long, perilous journey across the Pacific Ocean to Hawaii.

For visitors from around the world Hawaii is known for the endless variety of glorious beaches, especially Poipu, Sunset and Waikiki, the old whaling town of Lahaina, spectacular Kona Coast, Pearl Harbor, Haleakala National Park, Hawaii Volcanoes National Park and Kilauea, Na Pali Coast and Waimea Canyon - to name but a few. 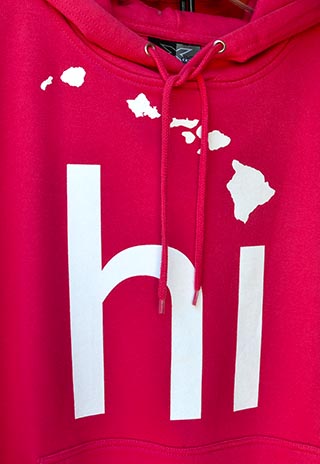 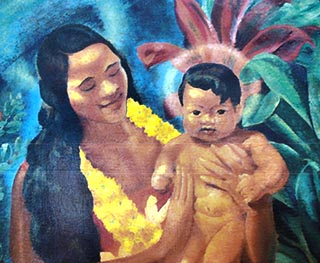 A piece of classic Hawaiian art for sale on the Big Island. 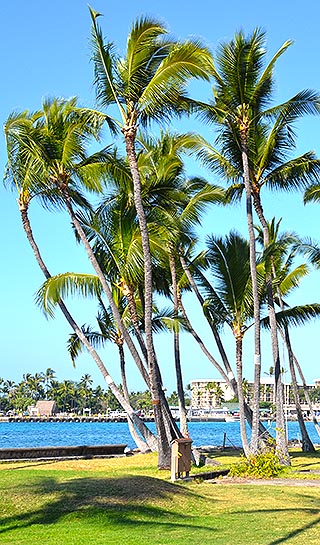 Palm trees in Hawaii are everywhere. 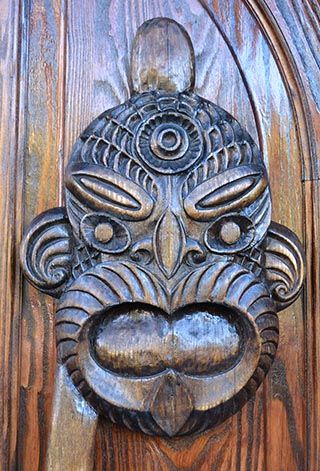 A Polynesia-style mask on display in Oahu. 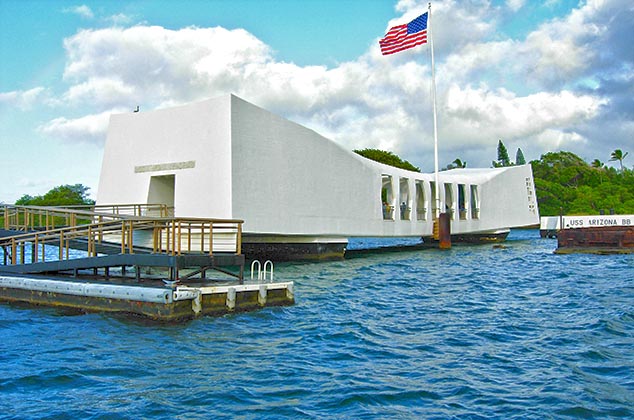 Hawaii is known for many things, including beautiful beaches, family vacations, flowers, palm trees, surfing, ukuleles and of course, volcanoes, but arguably its most famous attraction is the USS Arizona Memorial.

The USS Arizona is the final resting place for many of the ship's 1,177 crewmen who lost their lives on December 7, 1941, during the Japanese attack at Pearl Harbor on the Hawaiian island of Oahu. The 184-foot-long Memorial structure spans the mid-portion of the sunken battleship, and in the shrine room, the names of those killed on the Arizona are engraved on the marble wall. No trip to Hawaii is complete without visiting this emotional place; don't pass on the opportunity. 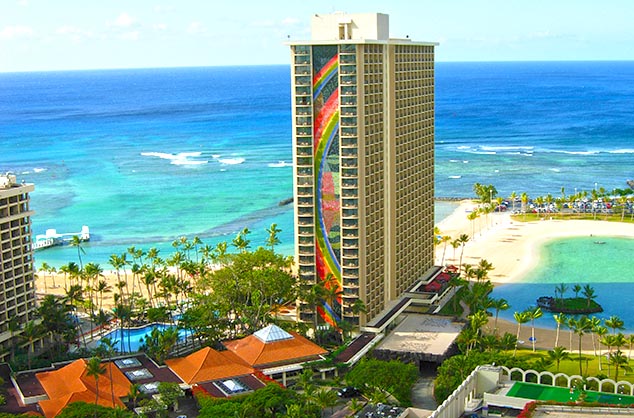 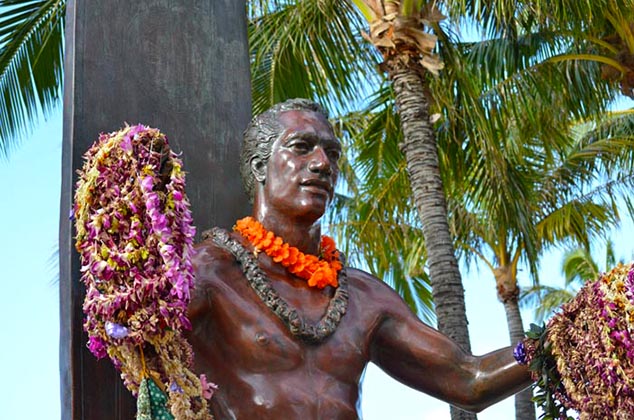 Duke Paoa Kahinu Mokoe Hulikohola Kahanamoku was an Hawaiian-born American competition swimmer who was also known as an actor, lawman, early beach volleyball player and businessman credited with spreading the sport of surfing. Kahanamoku was a five-time Olympic medalist in swimming. This statue of the "Duke" stands on Waikiki Beach, in the center of a popular local surfing spot. 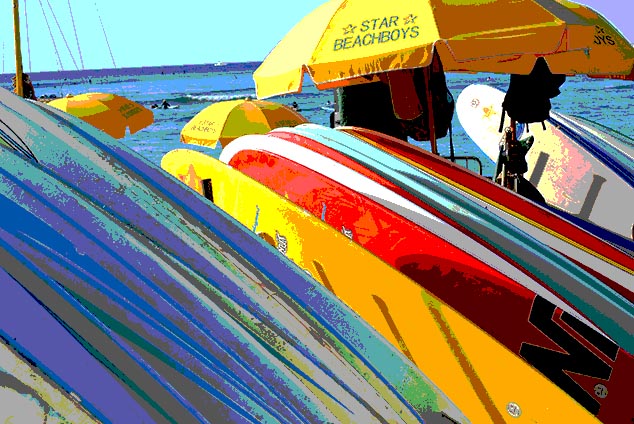 Surfing is believed to have originated long ago in ancient Polynesia, later thriving in Hawaii. It was once a sport only reserved for Hawaiian royalty, which is why surfing is often called the "sport of kings." King Kamehameha I himself was known for his surfing ability. With the end of the Hawaiian royalty system in 1819, commoners were allowed to freely participate in the sport. These boards stand ready on Waikiki Beach. 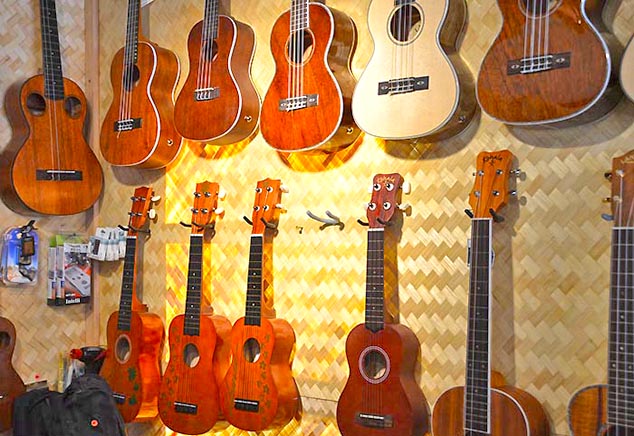 Ukuleles are commonly associated with music from Hawaii where the name roughly translates as "jumping flea," perhaps because of the movement of the player's fingers. Legend attributes it to the nickname of the Englishman Edward William Purvis, one of King Kalakaua's officers, because of his small size, fidgety manner, and playing expertise. According to Queen Lili'uokalani, the last Hawaiian monarch, the name means "the gift that came here," from the Hawaiian words uku (gift or reward) and lele (to come). 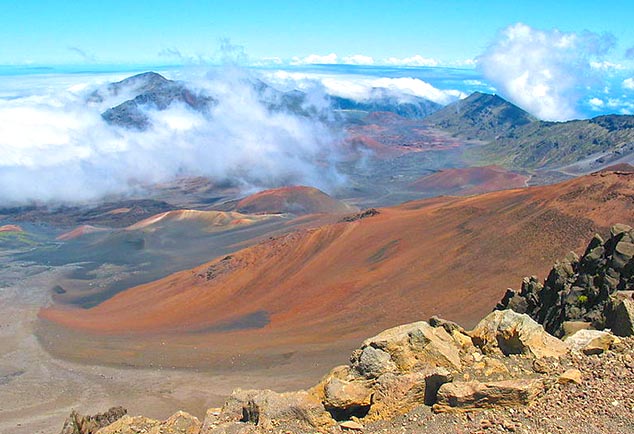 Haleakala, or the East Maui Volcano, is a massive shield volcano that forms more than 75% of the Hawaiian Island of Maui. The western 25% of the island is formed by the West Maui Mountains. The tallest peak of Haleakala, at 10,023 feet (3,055 m), is Red Hill. From the summit one looks down into a massive depression some 11.25 km (7 mi) across, 3.2 km (2 mi) wide, and nearly 800 m (2,600 ft) deep. The surrounding walls are steep and the interior mostly barren-looking with a scattering of volcanic cones. 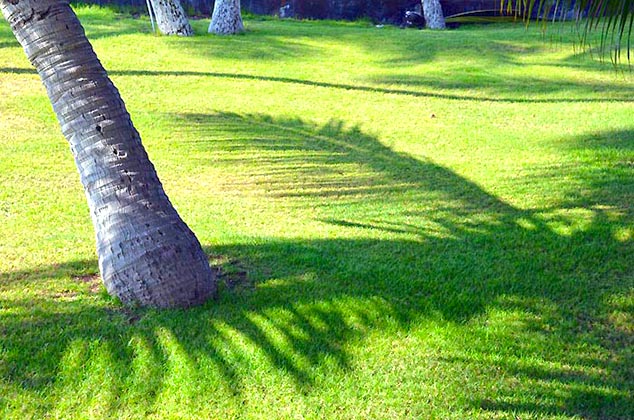 With a great tropical weather all year round, palm trees grow like weeds in Hawaii. This multi-island U.S. State has a tropical climate with hot summers and warm winters. During summer, the temperature ranges from 85-90 F (29-32 C) and during winter month from 79-83 F (26-28 C). 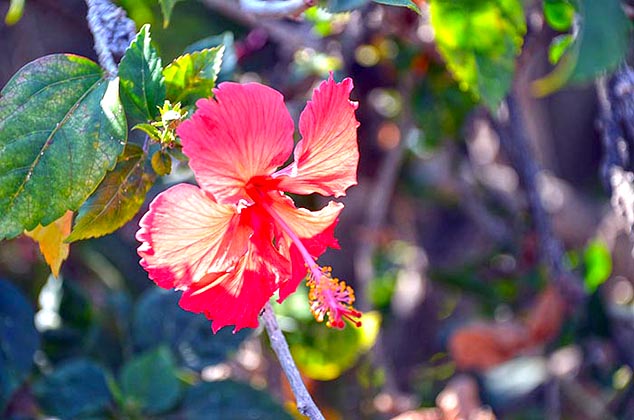 The official state flower is the yellow hibiscus, this is obviously a red version. Hawaiians originally adopted the hibiscus flower (of all colors) as their official territorial flower in the early 1920s. It wasn't until 1988, however, that Hawaii's legislature legally adopted the yellow hibiscus as the official state flower. The hibiscus originated in Asia and the Pacific islands. It is believed that there were originally only five hibiscus species native to the Hawaiian islands. Subsequently, other varieties were imported, and growers began to develop unique hybrids in a variety of colors and sizes.