Known for Victorian architecture, Alcatraz, cable cars, Chinatown, Fisherman's Wharf, steep hills and trademark fog, San Francisco sits on the shores of its namesake bay, bridged by its most famous landmark - the Golden Gate Bridge.
The city of San Francisco was built on 43 hills, and that's reflected in its incredibly steep and curving streets; Filbert is steepest at 31.5 degrees, but Lombard is the most popular with its seductive, winding curves.
The San Francisco Bay Area has a history of cultural diversity and tolerance. The first San Francisco residents included a diverse population of Ohlone Indians, New Zealanders, Spanish Californians, Americans, Chinese, Hawaiians, South Americans and Europeans, and that diversity is the city's char 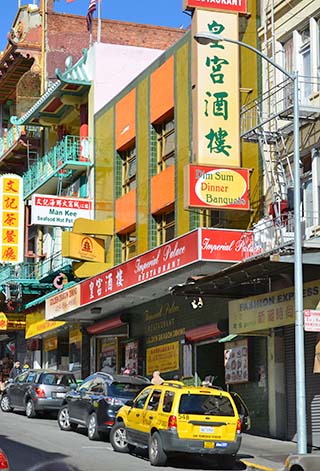 A colorful street in Chinatown. 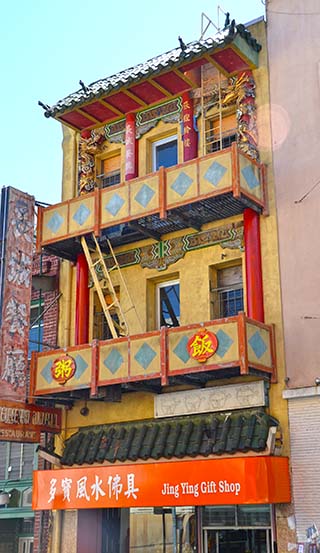 A stylish old building in Chinatown. 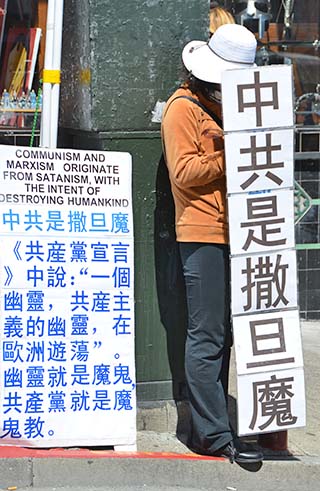 This woman appears to be hiding from her message. 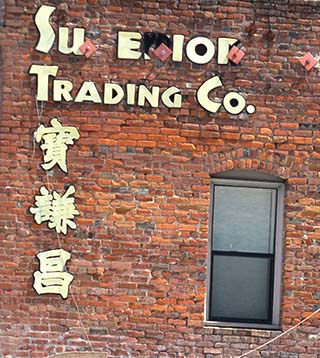 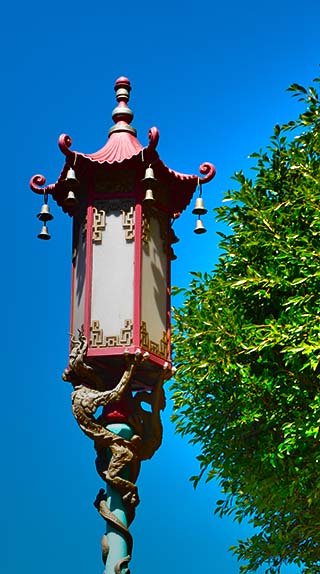 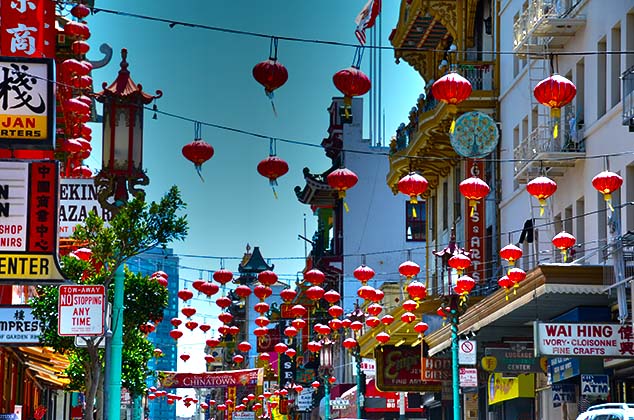 San Francisco's Chinatown is the largest outside of Asia as well as the oldest in North America. Since its establishment in 1848, it has been highly important and influential in the history and culture of ethnic Chinese immigrants in North America. Today it is an enclave that continues to retain its own customs, languages, places of worship, social clubs, and identity. It is also a major tourist attraction, drawing more visitors annually than the Golden Gate Bridge. 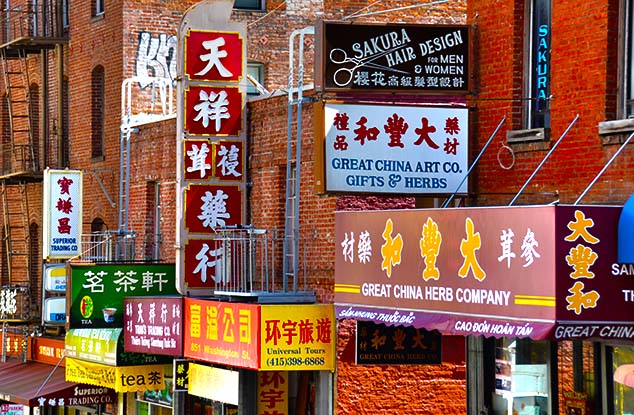 In the middle of Chinatown there are splashes of red and gold in the signs and banners strung across the narrow streets; they're so many options that it's hard to choose. 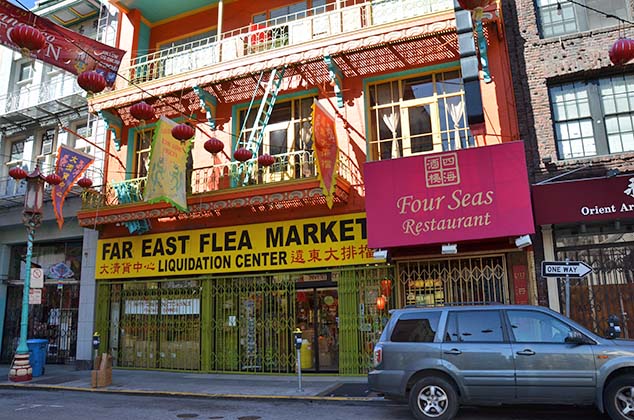 Chinatown is filled with shops of all descriptions; it's a bit like a magic-carpet ride for shoppers in search of a bargain. 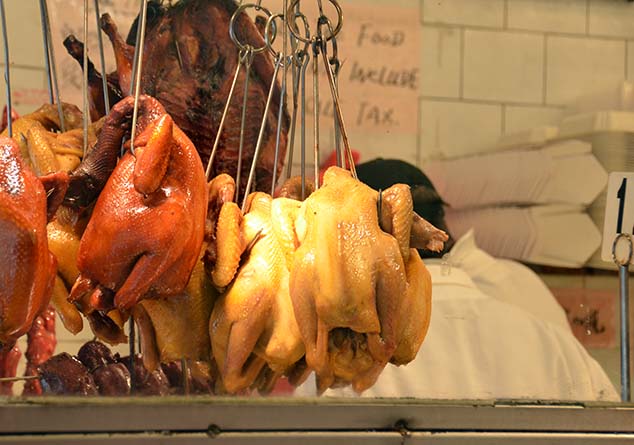 The color, smells and sounds here are all but impossible to resist, and when the rich smell of roast duck curls out of hole-in-the-wall eating places it's time to enjoy the local cuisine. 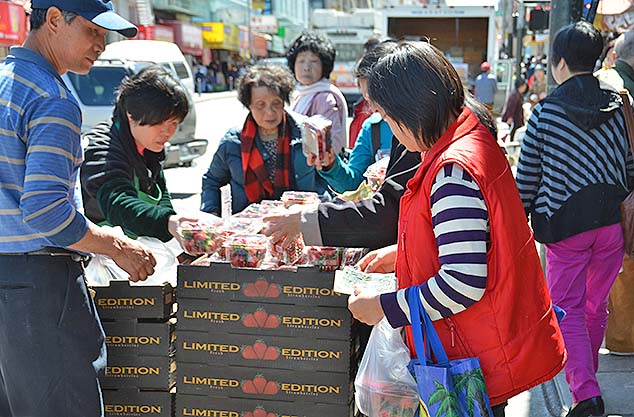 Street vendors are everywhere in Chinatown, and this one is selling strawberries to very interested shoppers. 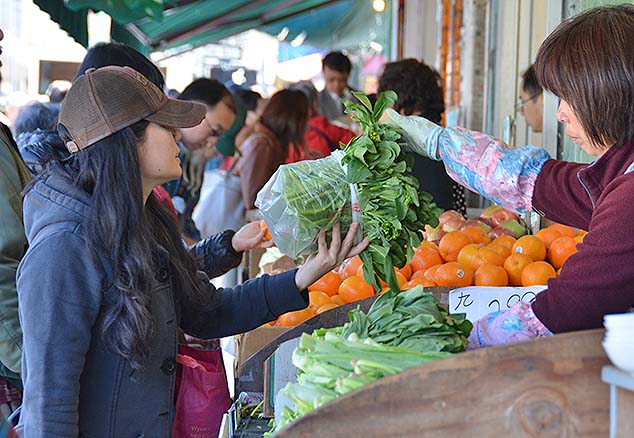 Another street vendor in Chinatown; how fresh are those greens? You'll need to squeeze them to find out. 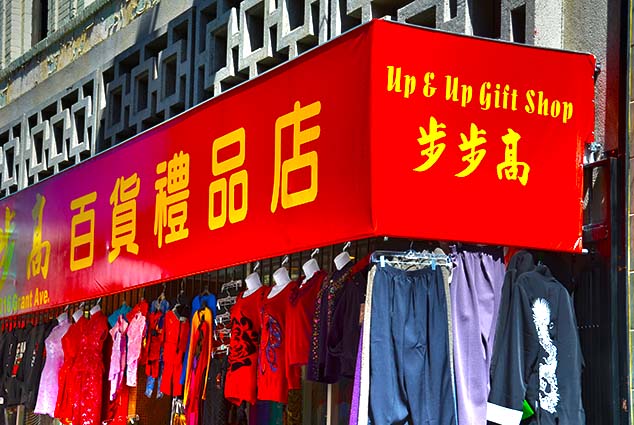 I figured this store must have good prices based on its name, either that, or the name applies to the clothes it sells, all hung way up high above the street, and very, very hard to reach. 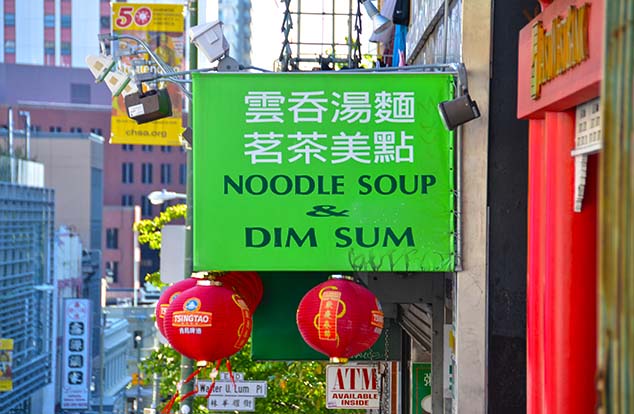 Dim sum is a Cantonese-style food prepared as small bite-sized or individual portions in small steamer baskets or on small plates. Dim sum is also well known for the unique way it is served in some restaurants, wherein fully cooked and ready-to-serve dim sum dishes are carted around the restaurant for customers to choose their orders while seated at their tables. I usually love it. 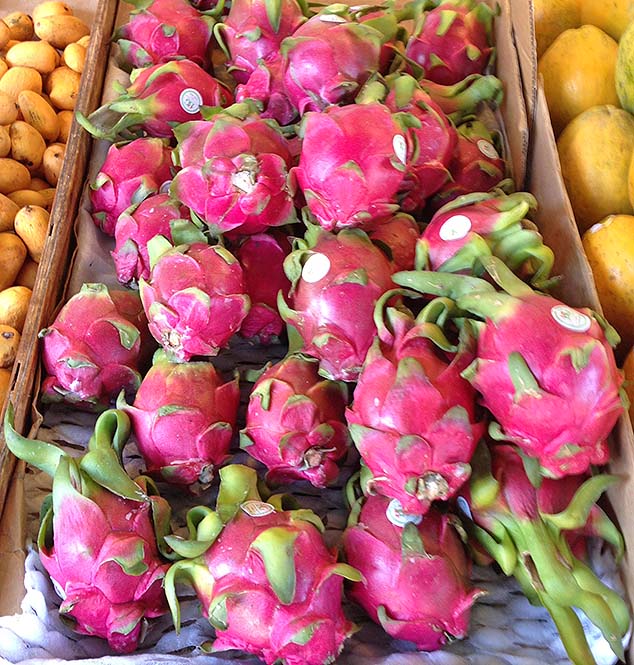 This is Dragon Fruit for sale in San Francisco's Chinatown. Dragon fruit is grown in Southeast Asia, Mexico, Central and South America, and Israel. It is low in calories and offers numerous nutrients, including Vitamin C, phosphorus, calcium, plus fiber and antioxidants. Dragon Fruit tastes sweet and crunchy, with a flavor that's like a cross between kiwi and pear.