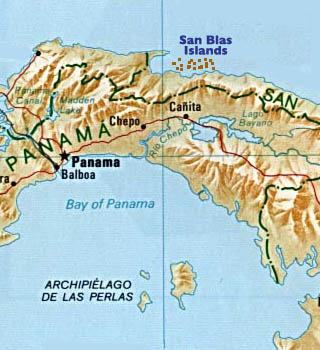 The San Blas Islands of Panama are an archipelago comprising approximately 378 islands and cays, of which only 49 are inhabited. They lie off the north coast of the Isthmus of Panama in the Caribbean Sea, northeast of Panama City.

The inhabitants (Kuna Indians) used to wear few clothes and decorated their bodies with colorful designs. When encouraged to wear clothes by the missionaries, they followed their body painting designs in their Molas, which they wore as clothing.

Today the San Blas Islands are famous for the locally produced Molas made of rainbow colored fabrics, emblazoned with fish, birds, jungle animals and geometric designs that would impress Picasso himself. The women wear the Molas and the men still fish from canoes as they did before Columbus came.

The Kunas still harvest coconut palm trees for something fresh to drink each morning, just as they have for untold centuries. And when you take pictures of the Kuna Indians they will expect a tip, and I found a dollar to be the perfect amount. 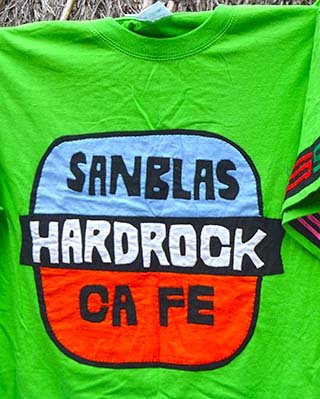 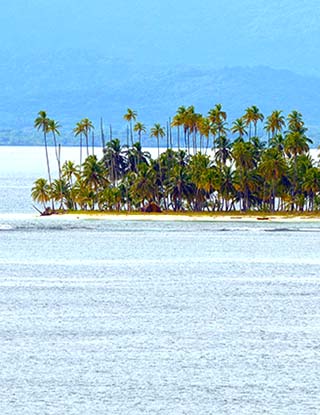 When you approach the islands from a distance, dozens and dozens of small cays (like this one) come into view; most of them are uninhabited. 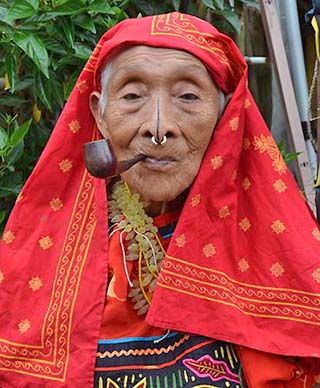 I spotted this woman in the village happily smoking her pipe. When I reached for my camera, she quickly shouted in English, "One dollar, one dollar," and of course I complied. 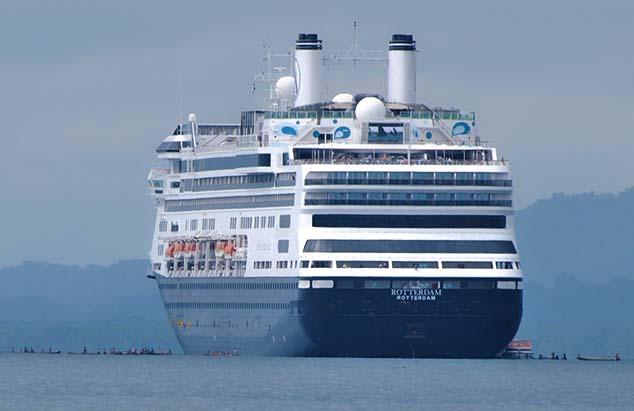 This is Holland America's ms Rotterdam, anchored just off of the San Blas Islands in the Caribbean Sea. Look closely for the dozens of small boats off either side of the ship; details below. 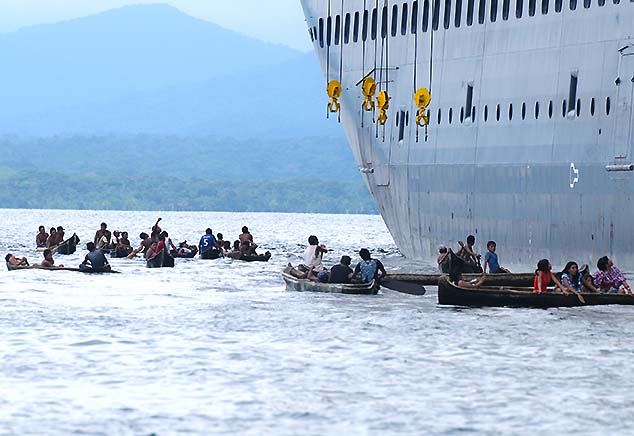 Whenever a cruise ship approaches the San Blas Islands, locals row out in their canoes (full of family and friends) and beg the ship's passengers to throw them money. Each canoe has at least one child who will dive for the money as it hits the water. We were there for 8 hours, and so were they. 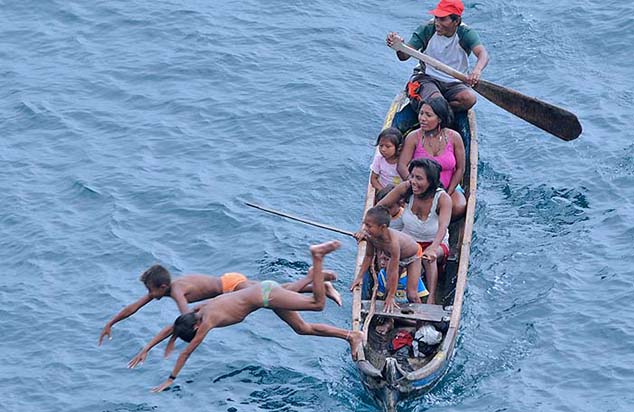 These two boys made dozens of dives for coins, and almost every time they returned to the surface with their prize in hand, and of course, the family would then beg for more. 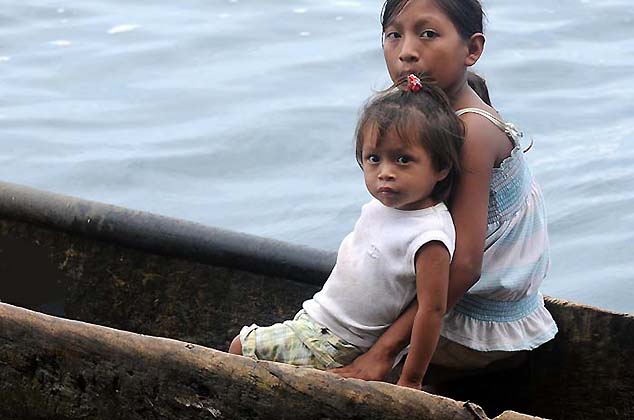 I spotted these two beautiful (but quite shy) sisters alone in their canoe as their brothers and others were diving for coins. 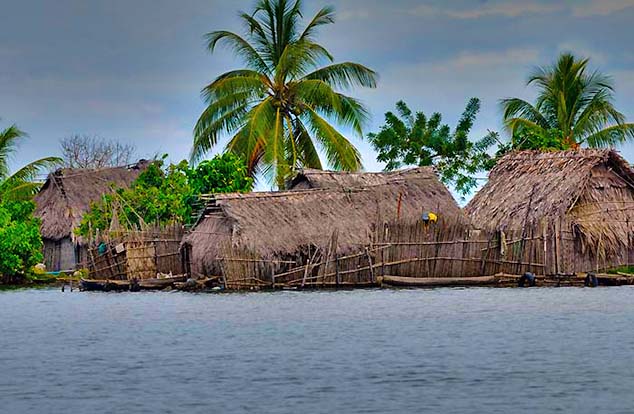 The Kuna live on small, often football-field size islands, with turquoise water, palm trees and white sand the dominate features. And yes, most of the homes (huts) are made of grass with bamboo supports beams. After looking inside a few of them, they appeared quite sturdy with nice woven floor mating. I was surprised how big some were as they were divided into multiple rooms. 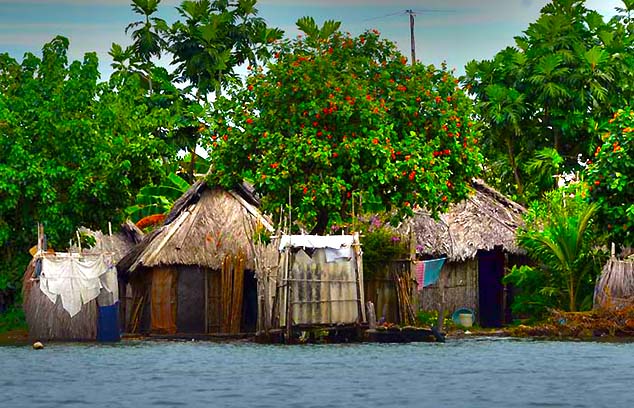 A few of the San Blas islands (close to the mainland) have electricity, while none of them have fresh water, so that much needed water, as well as food is brought in from the mainland in hand-hewn dugout canoes. 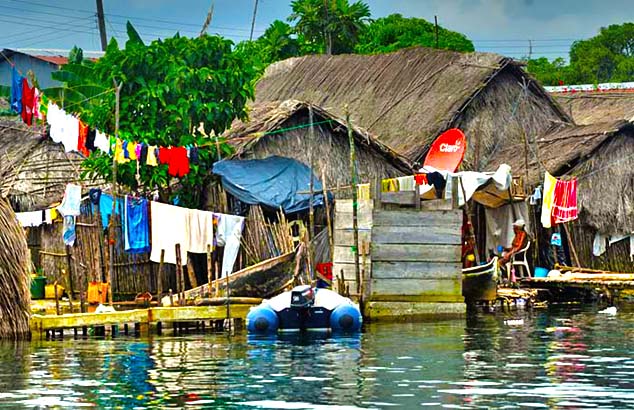 I was in this maze of huts all interconnected by doors and narrow hallways; they belonged to one family. 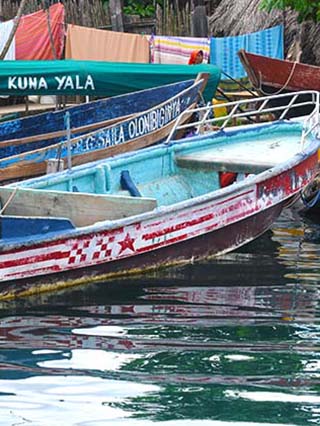 Boats in port in the San Blas Islands. 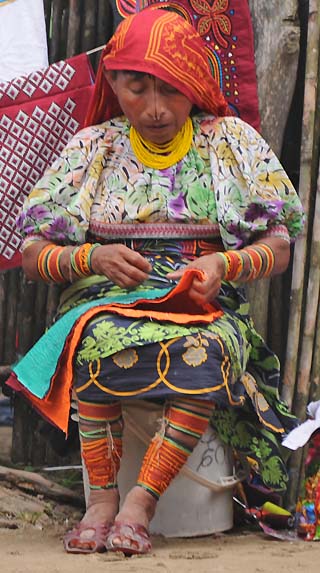 This is a Kuna woman weaving a Mola; note the leg wraps. 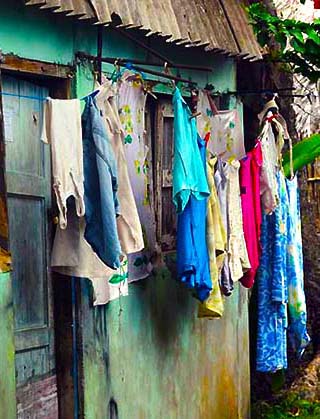 Here all laundry hangs outside to dry. 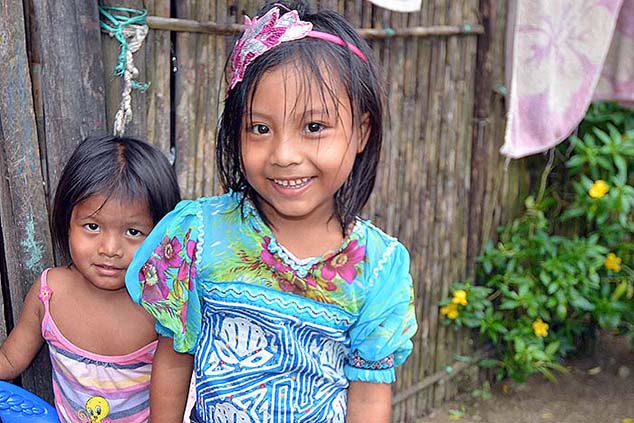 When we finally arrived on shore the children were there to greet us as most of the adults were hard at work. Have you ever seen such a beautiful smile? Her sister (lower left) was a bit dubious about having her picture taken. 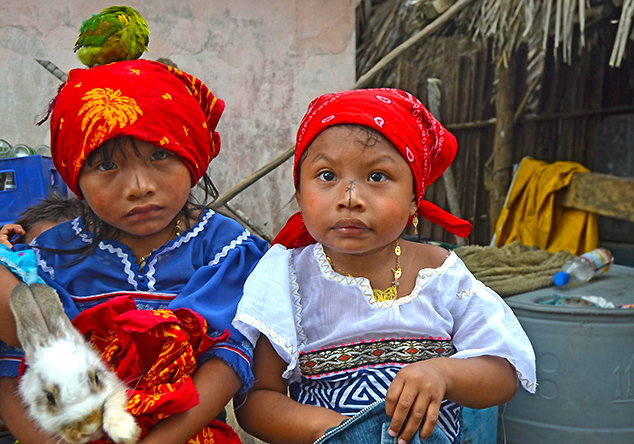 These two were certainly unsure of the situation. The one on the left is holding her pet rabbit, and yes, that's a small parrot on her head. Note the gold jewelry around their necks. 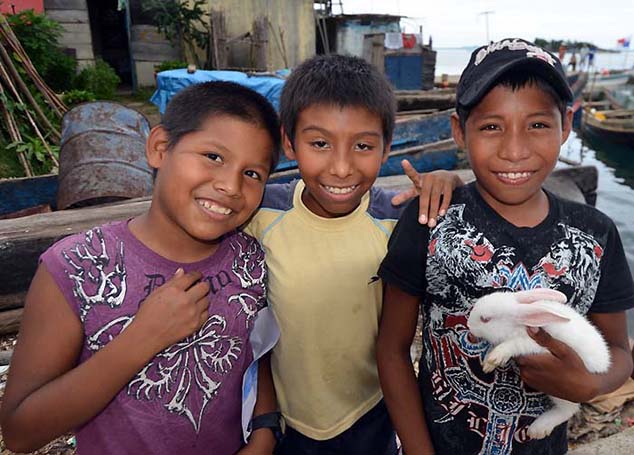 These three were smiling hustlers as they saw the opportunity to be paid for photos; each one got one dollar from me. 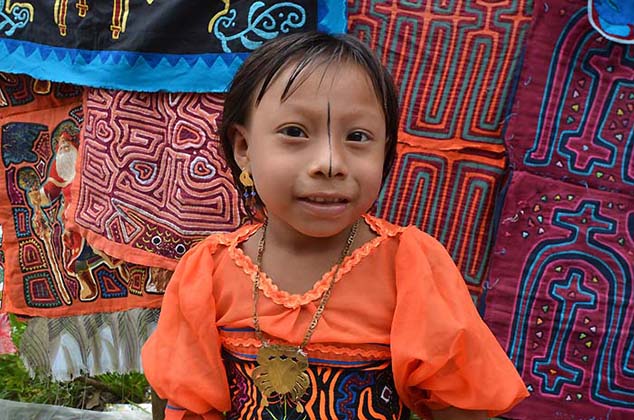 A native child sort of forcing a smile; her mother was near by waiting for one dollar, and she got it. 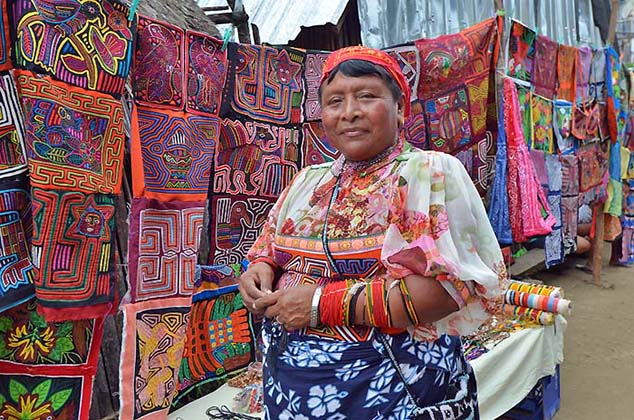 This is a very proud Kuna woman standing in front of her shop; I watched as she sold plenty of products, mostly to women from our ship. I found out later that cruise ship passengers provide a significant amount of income for the villages. 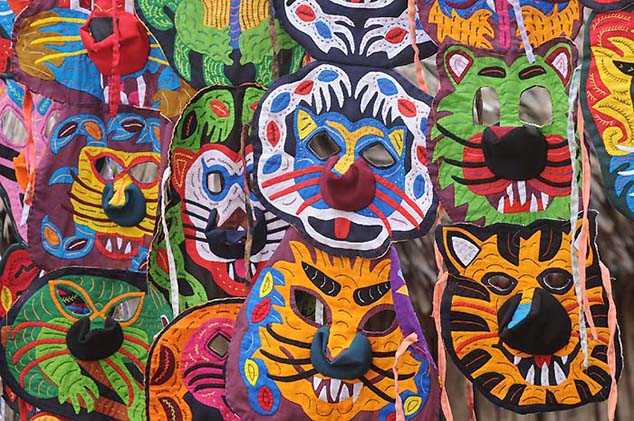 Colorful masks for sale in the San Blas Islands. 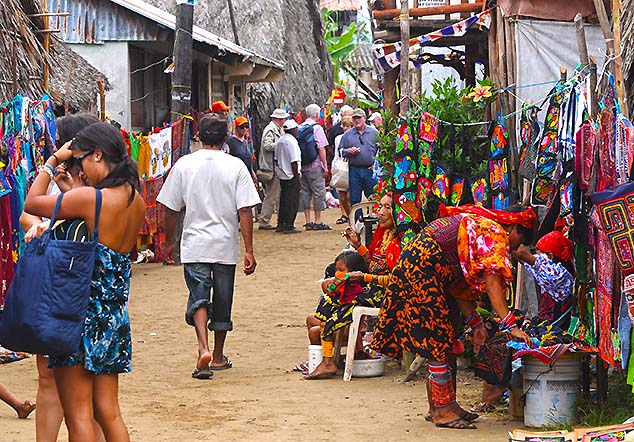 This is the main street of the village. Kuna merchants (women and children) line both sides and the tourists walk through. Take it from me, it's almost impossible not to buy something from this friendly people.