Warm winds sweep freely across (central) Europe because the western edges of the continent are not shielded by significant mountain ranges. Consequently, those Atlantic Ocean winds (or westerlies) in conjunction with the Gulf Stream, generally keep the European continent warmer than other locations at similar latitudes.

In northern Europe summers are cooler and winters are longer and colder, with heavy snowfall. Eastern Europe is also cold in winter, but summers are frequently hotter than in the west.

Across central Europe summers are certainly warm and often hot, while winters, although milder than the north, can be quite cold with significant snowfall.

The Mediterranean region of Europe typically experiences hot, dry summers and mild, wet winters. During the summer, 4 to 6 months without significant rainfall is the norm, as most of the precipitation falls during the winter months.

Yearly rainfall averages across Europe run between 20 and 60 inches, depending on location. Most of the rain falls in winter and early spring. Areas east, west and north of the Alps generally receive more rainfall, while along the edges of the Mediterranean Sea and in northern Scandinavia, lighter rainfall is common.

In the foothills and higher elevations of Europe's central and northern mountain ranges, summer temperatures are cool, while winters run cold with significant snowfall. In the southern mountain ranges of the Alps, winters are milder with much less snow.

For detailed weather information about a specific destination, "Select a European Country" from the drop-down list above.

For detailed weather information and forecast for a specific destination, "Select a European Country" from the drop-down at the upper right. 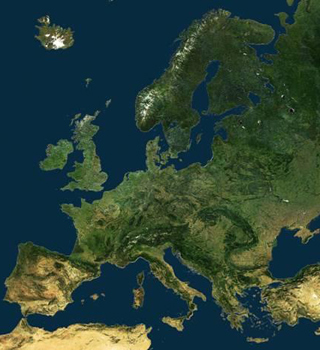