Santa Maria in Trastevere, one of the oldest Christian churches in Rome, is also one of the most visited sites in the "Eternal City." Many historians believe that the first mass was openly celebrated here.

The church is a favorite of many travelers for both its incredible history and the stunning golden mosaics that cover the ceilings and walls in the apse. In fact, when the lights are dimmed and only the glow of candles flicker in the darkness, the mosaics are simply breathtaking.

These 13th-century mosaics by Pietro Cavallini, an Italian painter and mosaic designer, all center on scenes from the life of the Virgin Mary. If you travel to Rome, make this church a must stop. 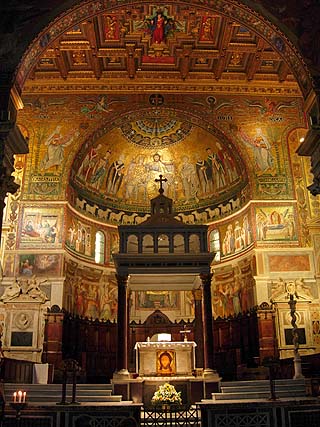 Within Santa Marie in Trastevere are many interesting and important chapels, crypts and icons.

The church is dedicated to the Blessed Virgin Mary, and behind locked doors on the right side you will find this colorful, eye-opening chapel. It is one of many.

Along the left side of the church is the tomb of Pope Innocent II. He was an important part of the Papareschi family, one of the most powerful families in ancient Trastevere. He was originally buried in San Giovanni in Laterano , but was moved here after that basilica was damaged by fire in 1308. 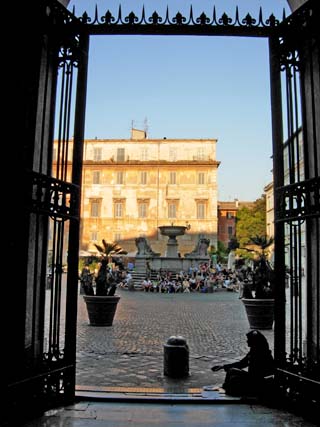 From the portico of Santa Maria in Trastevere, looking out into the namesake piazza, sits a famed 17th century octagonal fountain. It's the traditional heart of Trastevere and is surrounded by bars, restaurants and shops, as well as people.

The fountain and piazza have co-starred in many a movie. One you might remember was "Only You," a 1994 love story starring Marisa Tome and Robert Downy Jr. One evening in the piazza, Faith (played by Marisa) was running after Damon (Robert's role) and she broke the heal off her red shoe at the base of this fountain, and Damon chased after her. It's a warm-hearted movie and great to watch when you're in a romantic mood.

At the lower right edge of this picture note the silhouette of a beggar woman in the doorway. This is a very common practice in Rome, and for that matter, much of Italy. Local authorities recommend that tourists do not give any money to these people under any condition, and we support that approach. 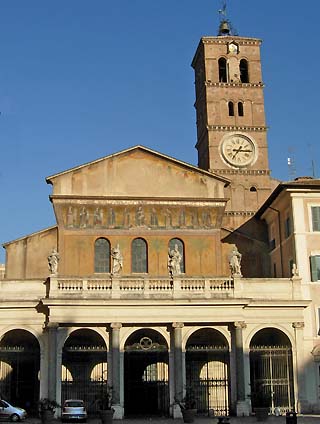 Santa Maria in Trastevere's facade and bell tower. The façade was rebuilt by Carlo Fontana in 1702. The four baroque statues above the portal are said to depict Saints' Calepodius, Calixtus, Cornelius, and Julius. 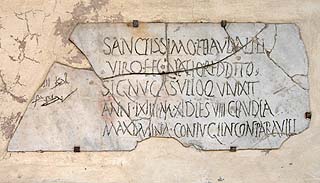 The portico walls are covered by dozens and dozens of ancient Roman funeral inscriptions. 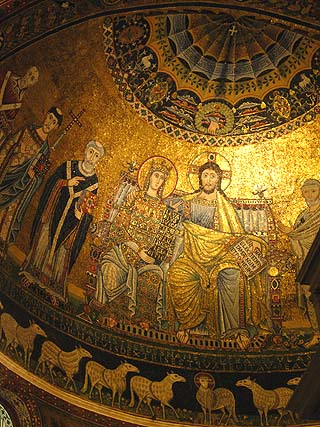 These 13th-century mosaics by Pietro Cavallini, an Italian painter and mosaic designer, all center on scenes from the life of the Virgin Mary. If you travel to Rome, make this church a must stop.

If you plan to take photos in the church, and you should, set your digital camera on its museum setting. That setting turns off the flash, and lets the natural reflective golden ceiling do its magic. If you use a flash, your photo (in most cases) will be not be to your liking. 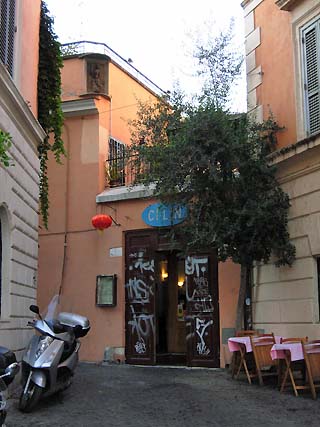 Adjacent to Santa Maria in Trastevere is (in the opinion of worldatlas.com) one of the best eating-out bargains in all of Rome.
Ci-Lin offers a traditional Chinese menu; they have no pizza, no pasta, just hot and tasty Chinese food. The best part of Ci-Lin is the price. Two people can eat here for less than 20 euros, and that includes water and a bottle of wine. In addition, the bathrooms are clean and the service is friendly 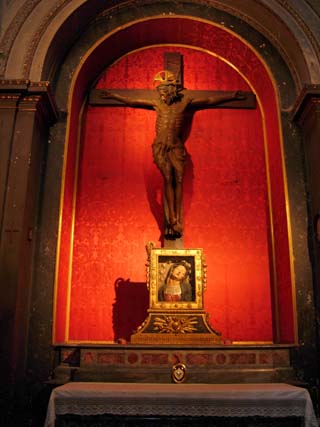 One of the beautiful chapels within the church. 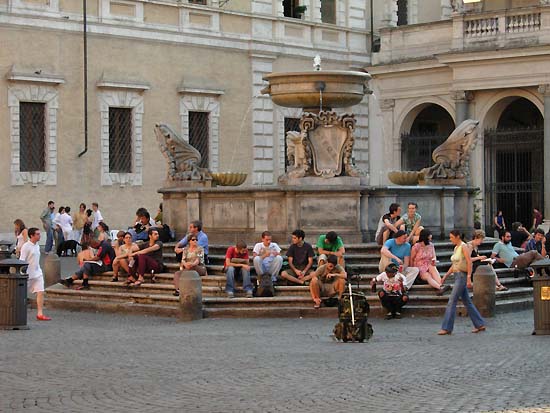 The fountain near Santa Maria in Trastevere 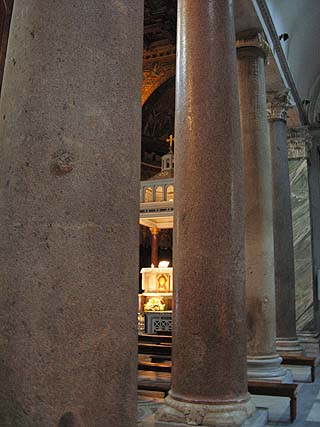 Across Rome, many churches, government buildings and public structures display columns, pieces of marble, classic statues and other remnants of the Roman Empire. Santa Maria in Trastevere is no exception.

The beautiful and tall granite columns that separate the nave from the aisles within the church are reportedly from the ruins of the Baths of Caracalla. At their individual capitals are the original heads of female pagan deities. 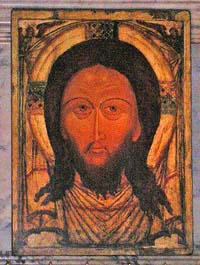 Centered on the altar beneath the apse, this illuminated face of Christ dominates the church, especially when the lights are dimmed.