Alkmaar is a medium-sized city north of Amsterdam easily reached by train in about 40 minutes. Nicknamed the Strong City, its most famous episode in history was the defeat of the Spaniards in 1573.

Much of its medieval charm is still intact with canals and drawbridges, historic buildings, quiet courtyards and narrow shopping streets.

Alkmaar is also home to one of the most popular tourist spectacles in the northern region of The Netherlands, the Kaasmarkt (Cheese Market), one of four Dutch cheese markets still in existence. Over 100,000 visitors make the trip annually.

The Alkmaar market is open every Friday from 10am to 12:30pm from mid-April to mid-September at the Waagplein, the main square. Cheese has been traded on the Waagplein since the 17th century.

The routine is quite ceremonial, buyers sniff, crumble and taste the cheeses, then begin intense bartering. Once all the negotiations have concluded, the kaasdragers (porters) carry the cheeses away for weighing.

The porters are divided into four teams, called veems, all wearing white pants and shirts, but with different colours of hats: blue, red, yellow and green. Each of the teams also has their own weighing scale and payments are made according to the amount of cheese they carry.

Other not-to-be-missed attractions in Alkmaar include:

The Waag (Weighing House), which was originally constructed as a chapel, but was converted after the victory against the Spaniards. It is now the HollandsKaasmuseum (Cheese Market Museum).

Canal trips are an enjoyable way to see the central city. The Vismarkt (Fish Market) is located at the start of the Verdronkenoord canal. While traveling the canals you will be able to view some of the over 400 monuments in this charming city. 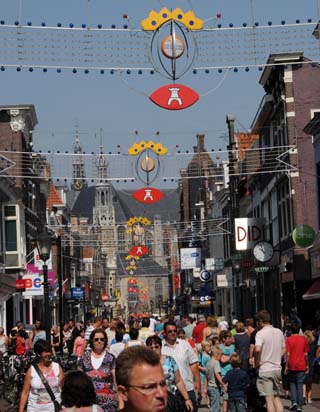 By 9AM on the morning of a Friday cheese market in Alkmaar, the main street is packed with tourists. 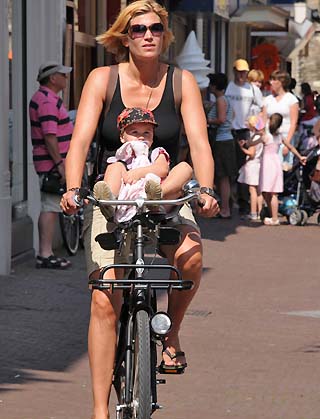 Bicycle transportation is popular with locals and visitors alike. 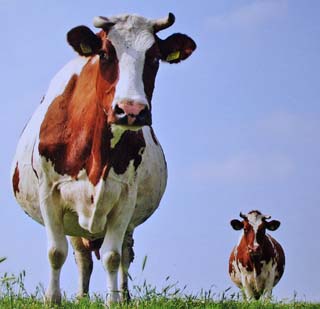 The unique qualities of Guernsey cows and the cheese produced from their milk has made the breed world-famous, especially in and around Alkmaar in the Netherlands. 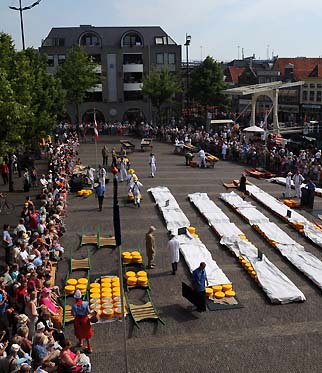 Alkmaar's cheese market is one of the Netherlands' most popular tourist attractions and it draws large crowds. As you can see the central square is full of long rows of cheese. 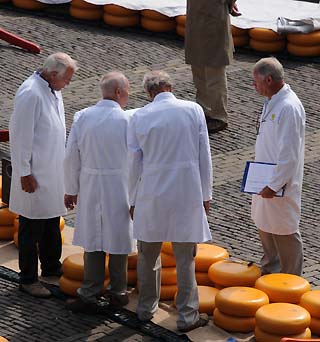 On the square, traders and inspectors determine the quality of the cheese for sale. 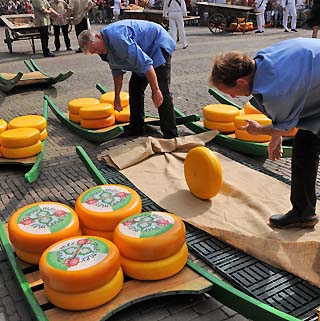 Before a batch of cheese can be purchased, it is loaded onto a cart for the official weighing. 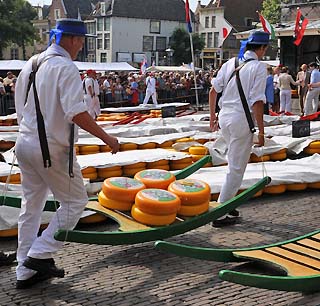 The Alkmaar cheese carriers' guild is responsible for moving and weighing cheese during the cheese market. The guild consists of four groups of seven men each. Each has its own color: red, yellow, green or blue. 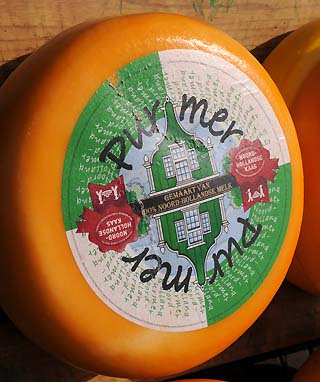 A close-up view of a cheese round in the market. 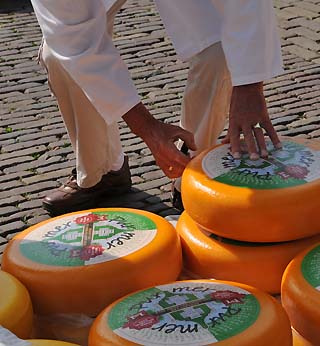 Sellers help a potential buyer taste the cheese by removing a small sample from the cheese round. Then they haggle about the price. 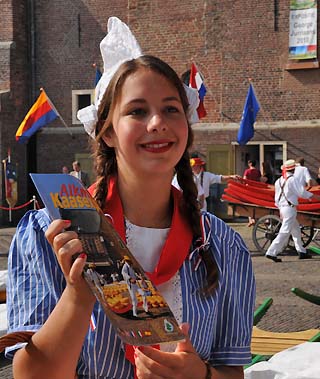 Once visitors arrive at the Alkmaar cheese market, programs are offered for sale by girls outfitted in traditional Dutch dress.