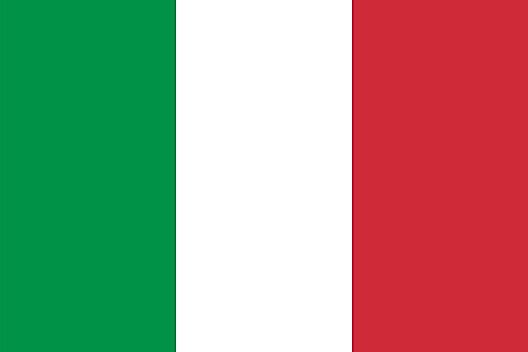 ATTRACTIONS: (a few major)
Italy is one of the most popular travel destinations on Planet Earth. Some say the Italians invented tourism in the 16th century, and it is safe to say that no country has given the world more cultural icons, including fine automobiles, architecture, fashions, operas, paintings, sculptures, tenors, and food.

Italy has so much to see and do - skiing in the Alps, the Lake District of the north, the historic and stylish cities of Florence, Milan, Naples, Siena, Turin and Venice, coastal cities and quaint little villages, and of course Rome, and the Holy See (Vatican).

The world famous boot-shape peninsula of Italy, extending into the central Mediterranean Sea is a rugged, mountainous country of simply stunning scenery that also includes the popular island destinations of Sardinia and Elba to the west, and Capri, Ischia and Sicily off the southern coast.

Italy is renowned for its olive oil, pastas, people, wine, and of course sunshine, and year-round great weather. Simply stated, Italy is "la dolce vita" (the sweet life), and many people that travel to this incredible country never want to leave.

The city has one of the best preserved historic centers in the entire country and is often overlooked by visitors. The University of Bologna is located here - the oldest university in Europe - founded in the 11th century.

For more information on Bologna, see below: 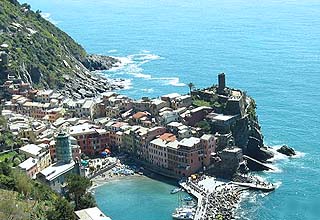 In Italian, Cinque means "five" and terre means "lands." The Cinque Terre is comprised of five little villages built into the rocky coastline of northern Italy. Each of the villages has its own unique character and are accessible by train. The villages include: Monterosso al Mare, Vernazza, Corniglia, Manarola and Riomaggiore. The towns are filled with interesting old buildings and narrow pedestrian lanes. Cars are not allowed in most areas of the villages.Expect large crowds in the summer months. 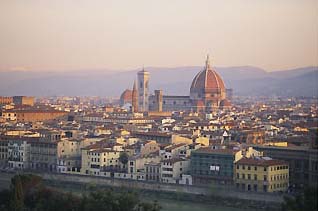 The Renaissance of art and culture began in Florence in the 15th century, and this classic city is home to some of the world's finest art, including the original David by Michelangelo, and priceless works by Leonardo da Vinci and Sandro Botticelli, to name but a few. The Ponte Vecchio bridge, or "Old Bridge" is one of the most famous landmarks of the city and is lined with jewellers and goldsmiths' shops.

For more information on Florence, visit these links: 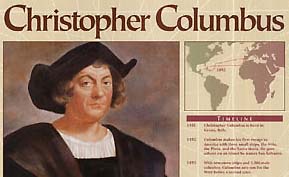 This graceful city of art, one of the oldest in all of Italy, is also the birthplace of Christopher Columbus. Major points-of-interest include the Piazza de Ferrari and its Opera House and Palace of the Doges. Other famous landmarks include the Old Harbor (Porto Antico) which has been transformed into a mall, the cemetery of Staglieno, known for its monuments and statues, and the Museo d'Arte Orientale which has one of the largest collections of Oriental art in Europe. The second largest aquarium in the world is here along with Genoa's landmark - the oldest working lighthouse in the world.

For more information on Genoa, visit these links: 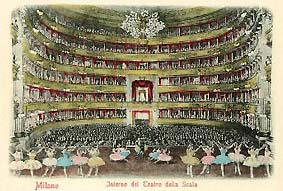 The second largest city in the country is one of the world's major commercial and financial centers, and one of the wealthiest cities in the European Union. Milan is one of the world capitals of fashion and design, along with New York City, Paris, London and Tokyo. The world's oldest shopping mall, The Galleria Vittorio Emanuele in the Piazza Duomo is located here.

For more information on Milan, visit these links: 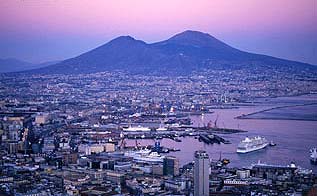 The country's third largest city lies in the shadow of Mount Vesuvius in the Campania Region in southern Italy. It's the most prosperous city in the region and is filled with many historical churches, castles, palaces, museums and subterranean tunnels. Due to its location on the Gulf of Naples, the popular islands of Capri and Ischia as well as Sorrento and the Amalfi Coast are easily reached by ferries and hydrofoils from its waterfront (shown above).

For more information on Naples, visit these links: 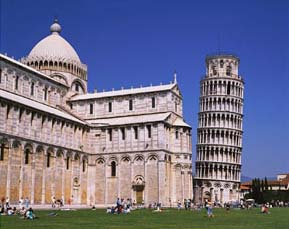 The most famous landmark in this city is, of course, the Leaning Tower of Pisa. However, the tower is just one of many remarkable structures located here. The Campo dei Miracoli (Field of Miracles), the Knights' Square where the Palazzo della Carovana is located, along with several churches and palaces make Pisa an interesting adventure.

For more information visit these links: 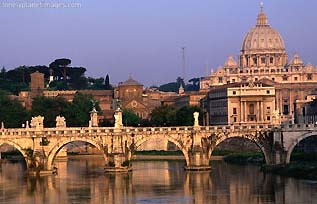 Founded more than 2,700 years ago, Rome is the largest open-air museum in all of Europe and very photogenic. Major attractions include The Vatican, Trevi Fountain, Trastevere, the Spanish Steps, Coliseum, Pantheon, Piazza Navona, and the views from Gianicolo Hill. The "Eternal City" is romantic, fashionable and a favorite destination for visitors from around the world.

For more information on Rome, visit these links: 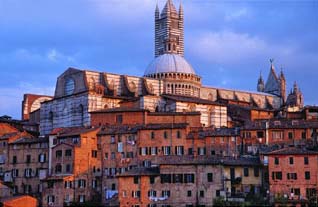 Located in the heart of the Tuscany Region, Siena is one of the most beautiful cities in Italy. Set on three hills, and drawn together by winding alleys and steep steps, it has managed to retain a medieval look and feel. The Piazza del Campo, in the center of the city, is considered to be one of the finest town squares in the entire country. Siena offers several interesting art museums and the Gothic-style Duomo is a must-see.

For more information on Siena, visit these links: 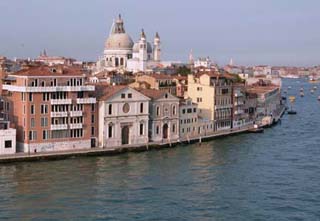 Located in northeastern Italy, Venice is widely considered Italy's (and the world's) most beautiful and romantic city. Literally standing in a lagoon just barely above the water line, it consists of 117 islands, and the city is connected by over 400 bridges that cross its 150 canals. It's small and compact, and the traffic-free streets (no vehicles allowed) along the winding canals are great for walking and sight-seeing. There are many magnificent churches and palaces, lively piazzas and interesting shops here.

For more information on Venice, visit these links: 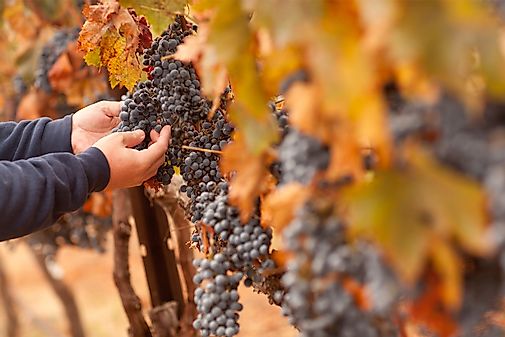 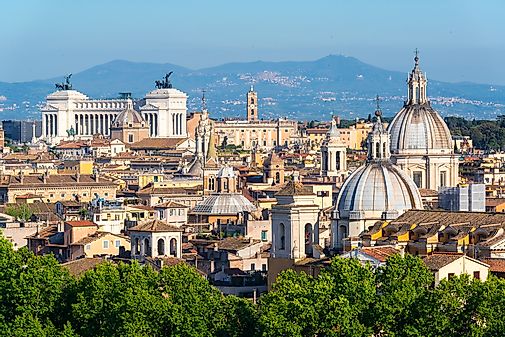 What are the Biggest Ethnic Groups in Italy?

The largest ethnic group in Italy is Italian. Around 8% of Italy's population identify as one of the numerous non-Italian minorities, with Romanian Italians being the largest of the minority groups. 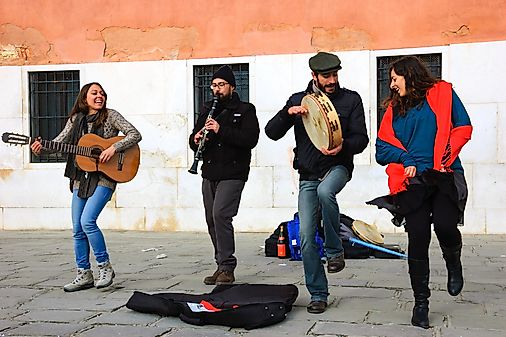 What Is The National Dish Of Italy?

Ragu alla Bolognese, also known simply as Bolognese, is recognized as the national dish of Italy. The meat based sauce and tagliatelle pasta dish traces its origins in Bologna, Italy, the city from which the meal gets its name. 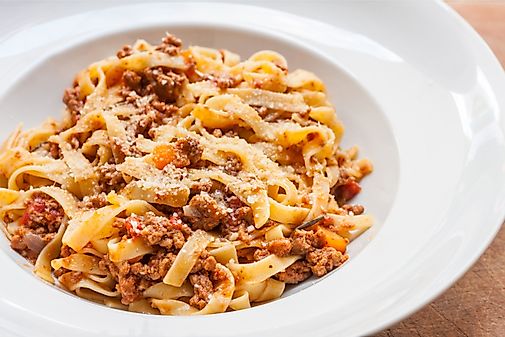 What Is the National Dish of Italy?

The currency of Italy is Euro. 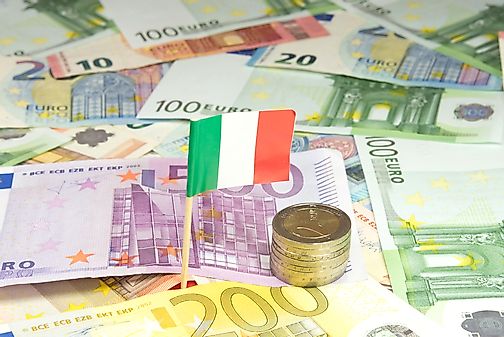 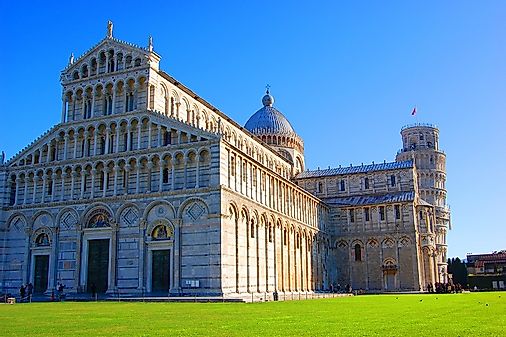