Greece
Greece is quite a remarkable place as you can literally touch the antiquities of the past and stand right where the genesis of our modern cultures and political systems began.
You can also enjoy the colorful charms of its many islands, towns and villages, shop till-you-drop in non-stop Athens and meet a friendly face at every turn.
In Greece, you are at the crossroads of colors and cultures, and you will certainly feel the strength of its amazing history and the warmth of the Mediterranean sun.

The Parthenon is surrounded by 8 columns at the front and back, and 17 along the sides, making 46 columns in all. The columns are 10.43m high and 1.9m wide at the base. 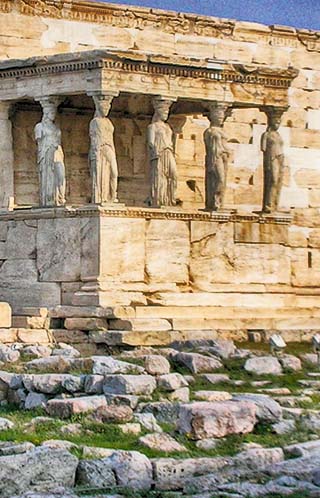 This is part of the remains of the Old Temple of Athena located on the Acropolis of Athens. 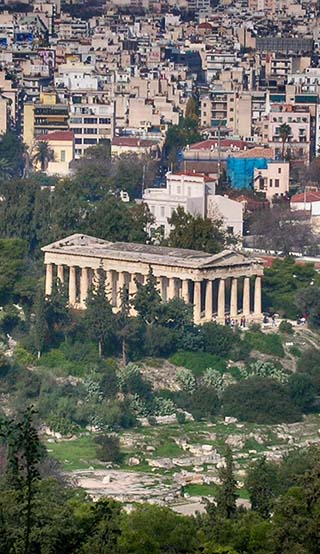 View of the ancient agora of Athens from the Acropolis; the temple of Hepaestus is centered. 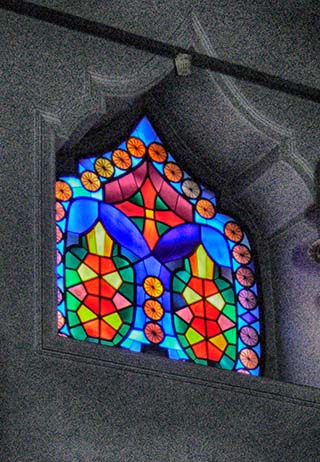 Greece is a profoundly religious country and 97% of the Greek population is of the Christian Orthodox religion. I spotted this colorful stained glass window within a church on Rhodes. 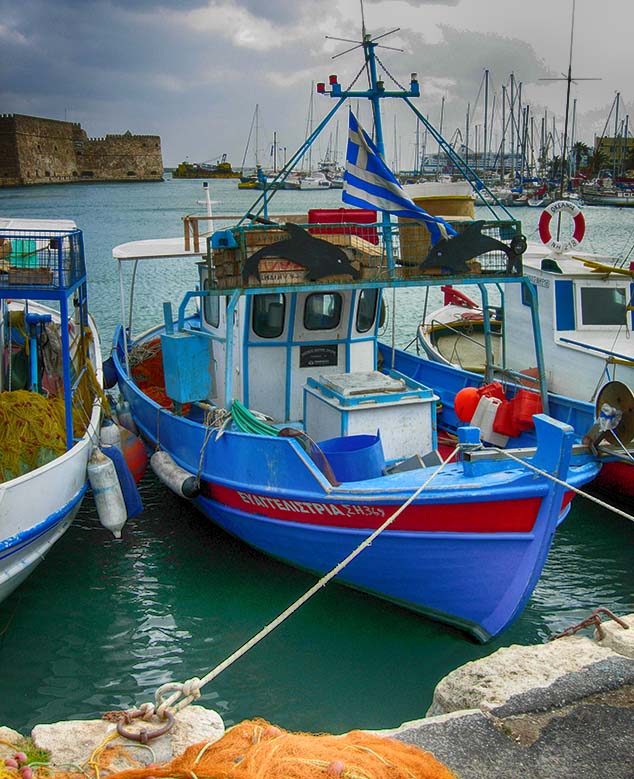 Greece has many islands (almost 1,500), and all have port cities; some large, but most small. And in each one you will find little fishing boats like these. This group sits is in the Heraklion, Crete harbor. Top left is Crete's famous Venetian fortress. 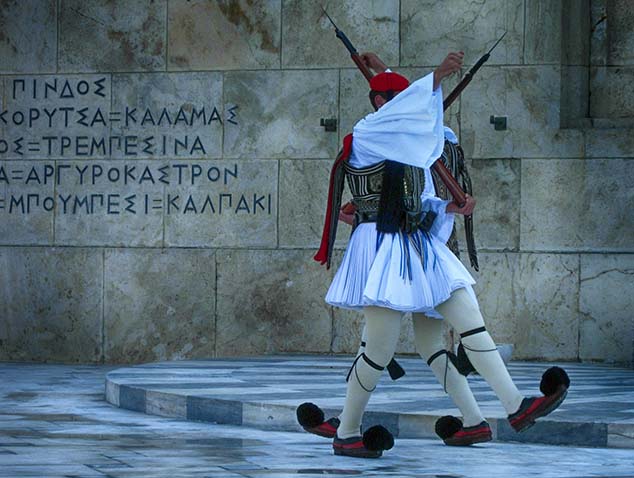 One of the great things to do in Athens, Greece is a visit to Syntagma Square, and the Tomb of the Unknown Soldier. Every hour, guards called Evzones perform the changing of the guard. They wear curious uniforms with pom-poms on the toes of their shoes and skirts with stockings. The uniforms differ in the summer from the winter garb, and on Sundays and special celebrations the uniform is the most formal. It's really worth seeing if you visit Athens. 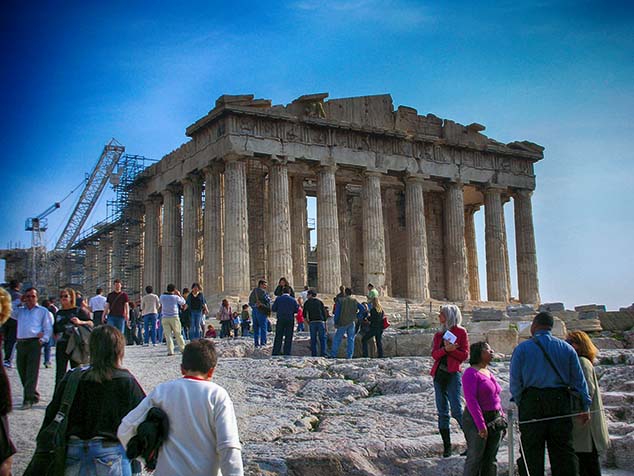 After 2,500 years of war, pollution, erratic conservation, pillage and vandalism, the Parthenon still stands atop the Athenian Acropolis. Construction began in 447 BC when the Athenian Empire was at the height of its power and it remains an enduring symbol of Ancient Greece, Athenian democracy, western civilization and one of the world's greatest cultural monuments. My advice: I'd visit it before it's gone as it's constantly being repaired. 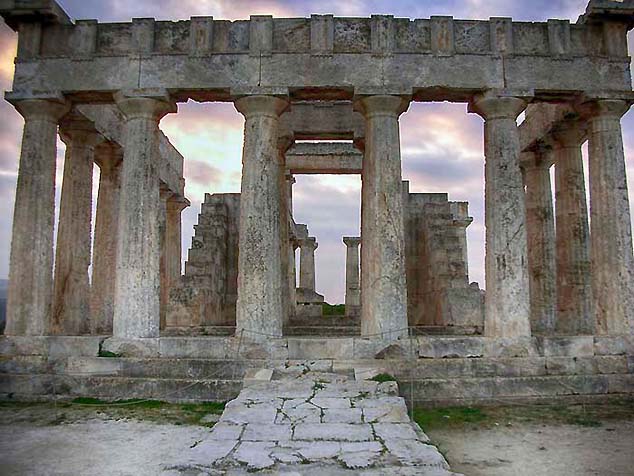 One of my favorite sights in Greece is the 3,000-year-old Temple of Aphaia, on Aigina Island. It is a stunning example of ancient architecture set in a natural forested area with sensational views across the island to the sea. Significant quantities of Late Bronze Age figurines have been discovered at the site, including proportionally large numbers of female figurines 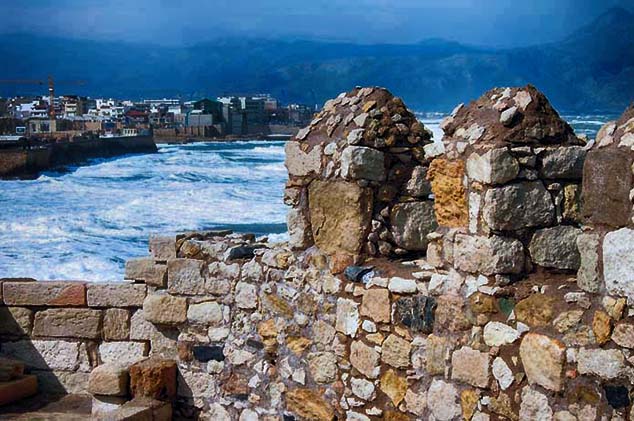 This is a harbor view of the Greek city of Haraklion from the Venetian Fortress of Koules. It is an impressive fortress that surrounds the harbor, one constructed by the Venetians in the early 13th century, when they conquered the town. If you haven't been yet, please know that a trip to Greece is certainly an historical journey back in time. 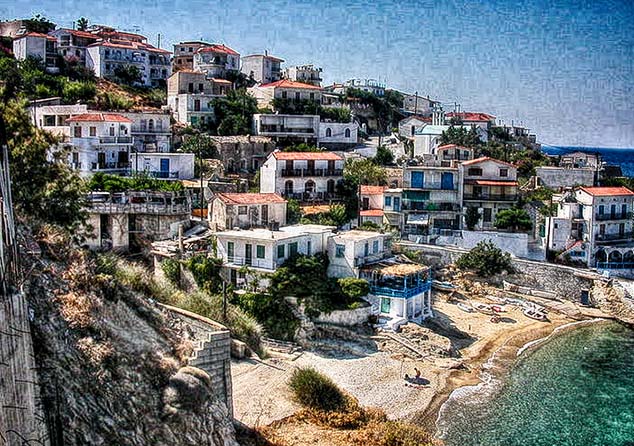 This is Armenistis village on the Greek island of Ikaria. It is ideally situated on a narrow hillside leg jutting out into the Aegean Sea. It overlooks the deep blue sea with a fantastic view to the distant islands of Samos and Chios. Armenistis is charming and quaint, and quite typical of small little villages across the country. 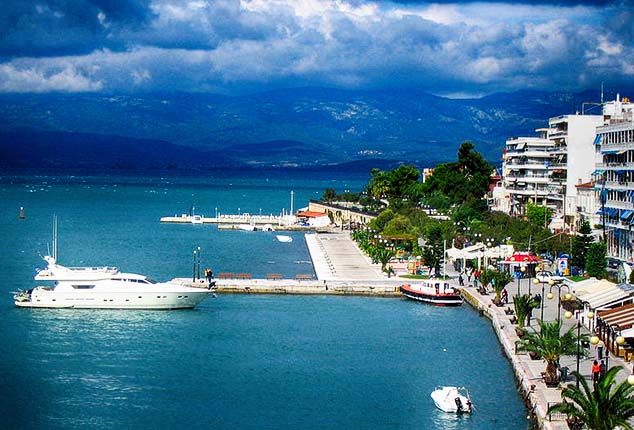 Chalcis is the main town of the island of Euboea in Greece, the second largest Greek island in area and population, after Crete. That's the Greece mainland in the background, and yes, the water is that blue. 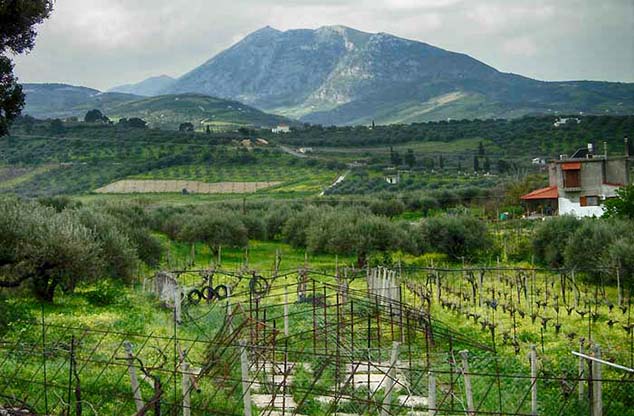 Across many of the Greek Isles olive trees are commonly seen. Its fruit is of major agricultural importance in the Mediterranean region as the source of olive oil. Over 100 different types of olive trees are cultivated in Greece which thrive in the Greek climate of long hot summers and mild winters with very little frost.