Wurzburg, Germany
Wurzburg is a city in the region of Franconia, Northern Bavaria, Germany. Located on the Main River, it is the capital of the Regierungsbezirk Lower Franconia.

On March 16, 1945, about 90% of the city was destroyed in 17 minutes by 225 British Lancaster bombers during a World War II air raid. All of the city's churches, cathedrals, and other monuments were heavily damaged or destroyed. Over the next 20 years, the buildings of historical importance were painstakingly and accurately replicated.

One of the city's most important sites is the Fortress Marienberg, a castle on a hill across the Old Main Bridge, that overlooks the whole town area as well as the surrounding countryside.

Another significant point-of-interest is the Wurzburg Residenz, a vast compound on the eastern edge of the town. The main attractions within the complex are the richly-decorated Hofkirche church and the magnificent "Emperor's Hall." 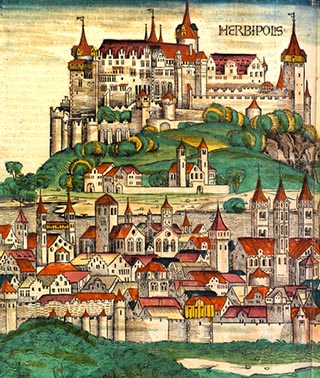 An old color print of Wurzburg, Germany. Note the Marienberg Fortress atop the hill. 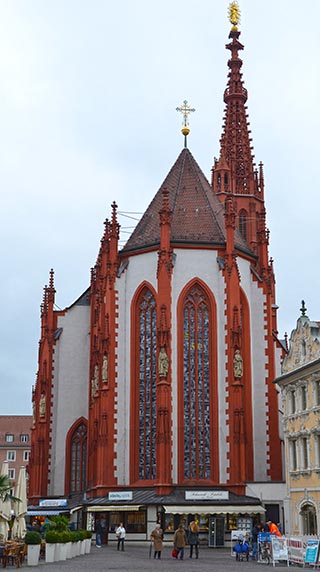 This is a side view of Wurzburg's Church of St. Mary. 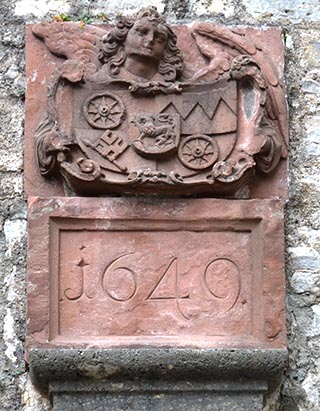 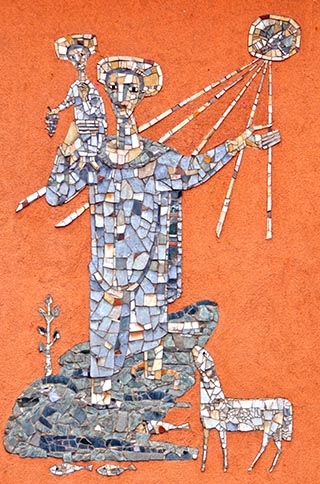 Ceramic art covering the wall of a local building. 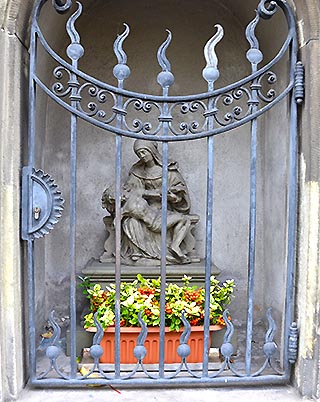 One of the many shrines found in Wurzburg, Germany. 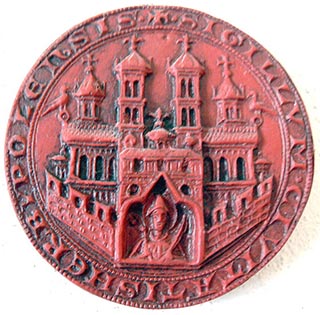 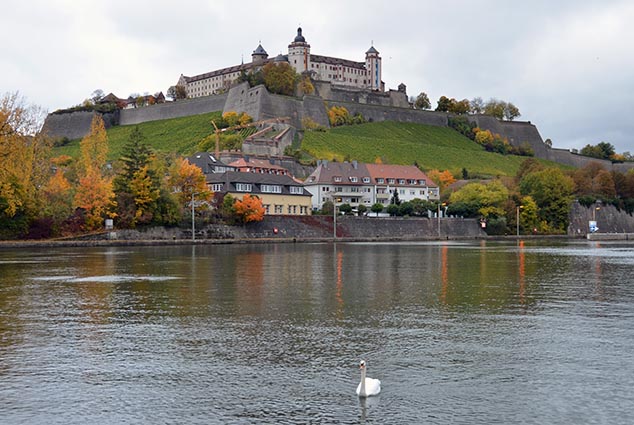 Dating to the 12th century, the Marienberg Fortress is a prominent landmark on the Main river in Wurzburg, Germany. The mighty Fortress Marienberg is the official symbol of Wurzburg and served as a the fort-like home of the prince-bishops for nearly five centuries; today, it is a park and museum and a worthwhile trip up the hill to wander its grounds. 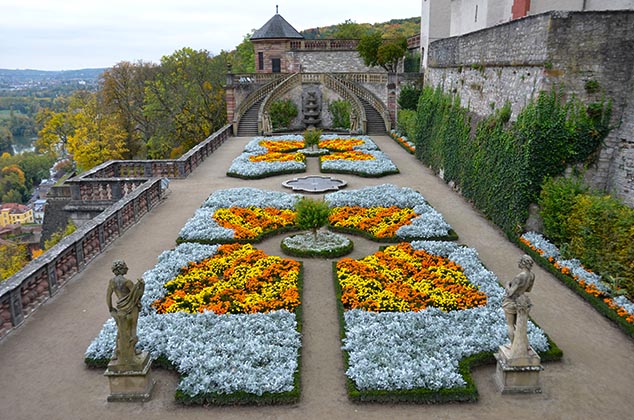 This lovely garden at the upper-level of Marienberg Fortress provided such a stark contrast to the stone fortification walls. To the left of the garden is the city of Wurzburg. (see below) 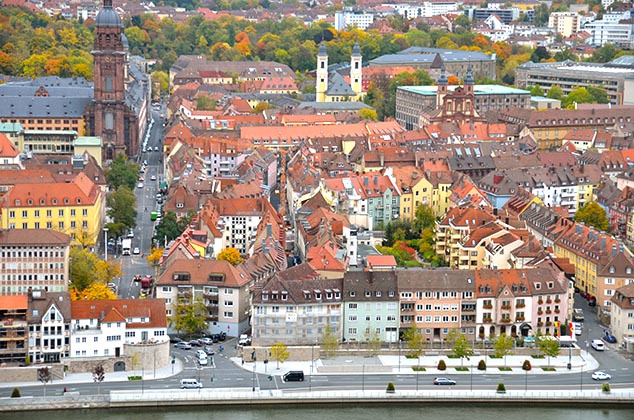 These are a few of the rooftops of Wurzburg, a stylish German city with some of its buildings dating to the 16th century. Even though the city was severely damaged by Allied bombing during World War II, one would never know as when strolling through town everything looks original. 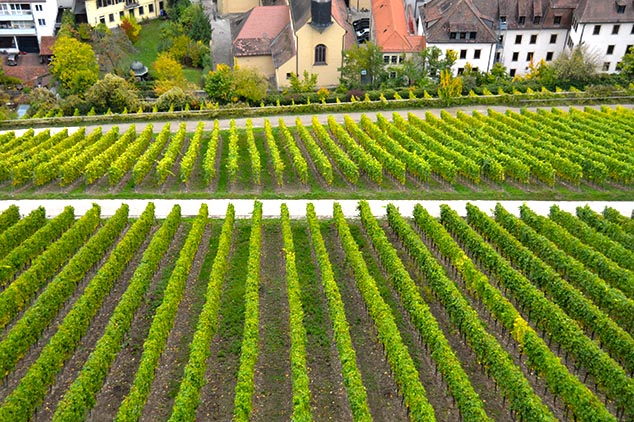 If you ever cruise a river in Germany you will quickly note that many of the hills fronting the river are covered by grape vines; all well maintained and in very neat rows. The wine regions of Germany produce some of the planet's best wine with varieties of white leading the way. 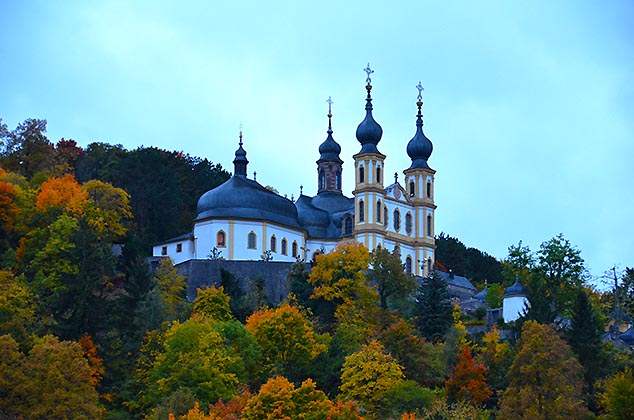 Among Wurzburg's many notable churches is the Kappele, a small Baroque/Rococo cathedral (chapel) perched on a hill facing the Marienberg Fortress and the city center. One of its most interesting side-chapels contains the tomb stones of Rudolf II von Scherenberg (1466–1495) and Lorenz von Bibra (1495–1519). Much like the fortress, views of Wurzburg from the chapel are fantastic. 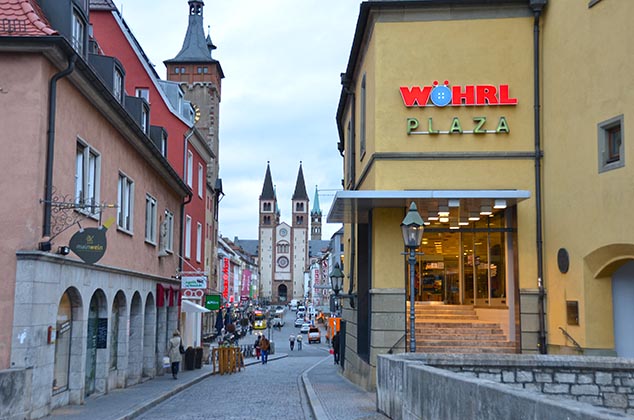 From the "Old Main Bridge" the two towers at the end of the street belong to St. Kilian, the fourth-largest Romanesque cathedral in Germany and home to artifacts from many centuries. In an interesting side note, the cathedral was severely damaged during a fire in 1945, with consecration after rebuilding held in 1967. 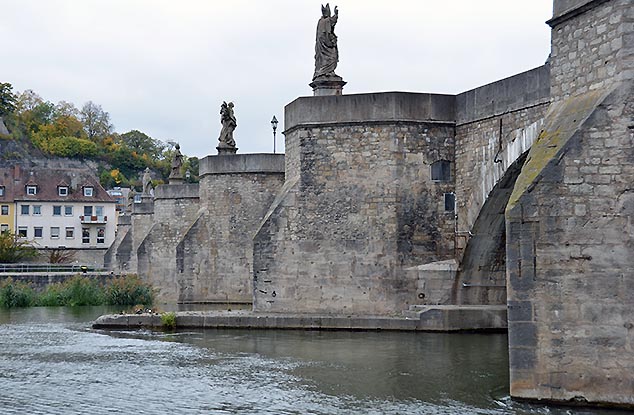 Wurzburg's Old Main Bridge (1473–1543) was built to replace the destroyed Romanesque bridge that had dated from 1133. In two phases, beginning in 1730, the bridge was adorned with statues of saints and historically relevant figures, somewhat similar to the Charles Bridge in Prague. 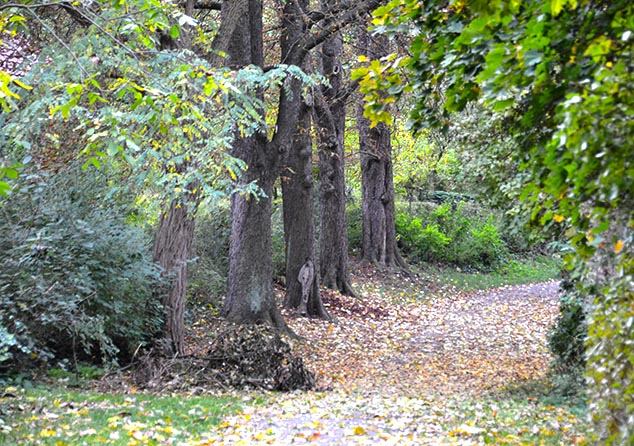 I visited this charming city in October of the year and fall colors were starting to appear. I walked this leaf-covered path up the hill to the Marienberg Fortress and there was a definite chill in the air. 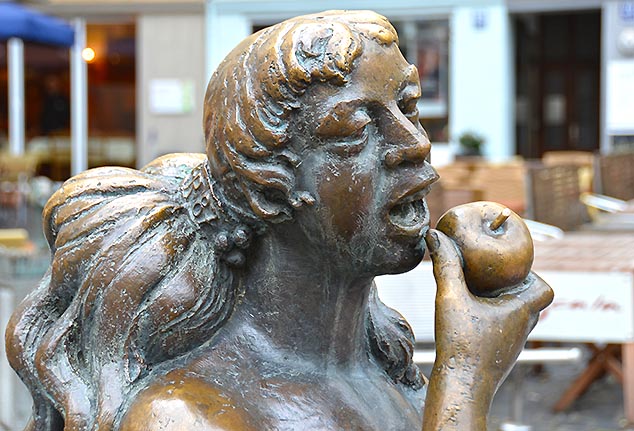 If you do get a chance to visit this Germany city, I suggest you do, and while there, take a big bite as you won't be disappointed.