A late morning arrival (11am) into St. Peter Port gave us the opportunity to see the huge Castle Cornet virtually dominating the picturesque harbour. Although hazy and misty upon our arrival, the sun soon appeared and we had beautiful weather the rest of the day.

Pierre-Auguste Renoir, the French impressionist artist, spent about a month here in 1833 and it is easy to see how he was inspired by the views of the bay and the rocky coastline.

Guernsey is 24 square miles and in the city of St. Peter Port are elegant 18th century homes, pubs, cafes and shops. It has been a busy trading post since the Roman times, due to its deep anchorage. During its long history, some of its residents have included ship builders, privateers and merchants.

The Channel Islands are the only British territory that was occupied by the Germans during World War II. There are still visible reminders of the 1940 to 1945 German occupation. The Occupation Museum showcases the history of the evacuation of half the population, including most of the school children.

The Underground Hospital and Munitions store is a maze of tunnels, virtually invisible from the surface, with over 75,000 square feet. The hospital had an operating room, kitchen, staff quarters and could accommodate 500 patients.

Even though Guernsey is much closer to France than the United Kingdom, it is part of the British Isles. The Island is self-governing and offers favorable taxation, so there are offshore banks, insurance companies and fund management offices here.

In order to visit the city of St. Peter Port, it was necessary to take the ship's tender - only a 10-minute ride, dropping us in the downtown area, which is delightful. We immediately noticed the beautiful flowers - in gardens, in window boxes, large stone planters and hanging baskets. Even the bus stops were attractive with a gazebo covering wooden benches and flower baskets hanging all around.

The streets are a bit steep, leading up from the bay. We first wandered through the downtown, appreciating the cleanliness, the cobblestoned streets and the varied storefronts. 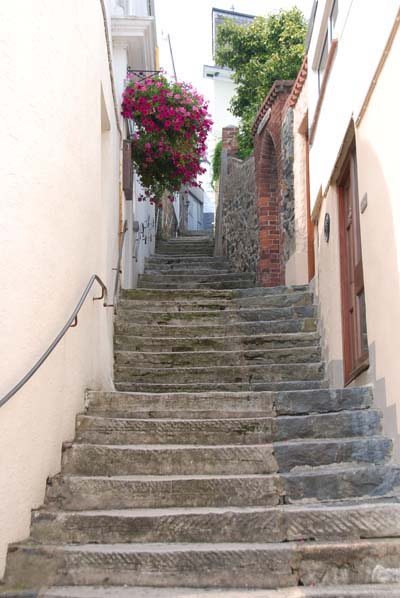 Our walk led us to a narrow set of steps - appropriately named the "Constitution Steps," (see above). It's difficult to imagine staying in one of the hotels or guest houses along the steps or worst case - living in an apartment. One would definitely build their "constitution" just carrying home groceries or dry cleaning!

We knew from advance reading that the Castle Cornet was a "must see". It was an easy walk and took us along the harbour where many pleasure, sail and fishing boats are moored. However, the most interesting boats were located in a big pool just past the harbour. Here we watched as remote-controlled boats whizzed around the pool. They were amazing in detail - two were replicas of today's lifesaving boats - complete with the crew.

The Castle Cornet is not glamorous as many European castles - as it was built in the 13th century to protect the port from attacks. The castle has been restored, following an explosion in 1672 and is now home to the castle history museum and three military museums. The castle was given to the Island by King George VI at the end of World War II.

The various vantage points throughout the castle's grounds offered the best views of the island and the sea.

Victor Hugo, author of Les Miserables, lived here for nearly 20 years. His former home, the Hauteville House, decorated with beautiful French antiques, is open for touring. The upstairs views include the French coast and the island home he gave to his long-time mistress.

Reluctantly, we strolled back to the tender port and returned to the ship. We thoroughly enjoyed our day in charming St. Peter Port, and like so many other destinations we've visited, would pay a visit here again.

Tomorrow is a day at sea as we travel to Dublin.

More info about the Channel Islands

JOURNALS
back to Current Journal