Our departure point for our northern Europe voyage.

After spending five weeks in The Netherlands capital city, Amsterdam, we moved on to Rotterdam and spent three days aboard the Cruise Hotel SS Rotterdam. The SS Rotterdam, known as "The Grande Dame", was launched by Queen Juliana in September, 1958. It was the last great Dutch "ship of state" and sailed for 40 years, retiring in the fall of 2000.

After refitting and refurbishing, the SS Rotterdam returned to Rotterdam and opened as a hotel and museum this past February (2010). 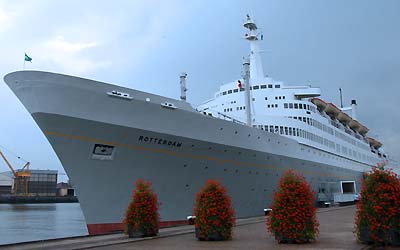 It was a delightful experience to stay onboard this historic hotel and fueled our excitement for boarding the Holland America's Westerdam today.

We enjoyed Rotterdam - a totally different look and feel from Amsterdam. Rotterdam is commonly referred to as the "gateway to Europe", as it is the largest port in Europe and until 2004, it was the busiest port in the world. Rotterdam is on the banks of the Nieuwe Maas (New-Meuse) River and at the end of the Rhine-delta.

Of all the cities in The Netherlands, Rotterdam is the "newest" - based on its architecture throughout the city. During World War II, the German army invaded The Netherlands and Rotterdam was bombed. The heart of the city was destroyed, 900 civilians were killed, and over 80,000 left homeless.

Since that time, the city gradually rebuilt - with a diverse and somewhat open architectural policy, resulting in new styles of apartments, office buildings and public facilities.

One of the most unusual complexes is the Cubic Houses, in Dutch: "Kubuswoning". The city asked architect, Piet Blom, to design a housing complex on top of a pedestrian bridge. Blom tried to use each cube to depict an abstract tree so that the entire village would represent a forest.

We visited one of the Cubes while here, and although very unique and interesting in design, a bit too small for our needs. Each house has three levels - living room and kitchen on first, the middle area is the master bedroom and the top is an extra bedroom or could be used as a den or office space.

Rotterdam is located near Brussels in Belgium and The Hague in The Netherlands. With this close proximity to two major centers of government, along with the port, the city has a very large expat community - nearly 60% of the residents are either non-Dutch or Dutch who were born abroad and have relocated here.

We have so enjoyed our time in The Netherlands and look forward to our return mid-September. It's a fascinating country, with a rich cultural heritage and a high quality of life. The cultural differences are amazing, ranging from the traditional Cheese Market in Alkmaar to the waterfront city of Volendam, now a major tourist attraction and artists' conclave, to the small, beautiful village of Zaanse Schans with its still-working windmills and wooden shoe factory and museum.

Amsterdam is a great gateway for travel to other nearby cities in Europe, such as Brussels, Paris and many German cities. The public transportation in The Netherlands, as in most of Europe, is exemplary and one that I wish could be replicated in the USA.

Tomorrow, we shall spend the day in St Peter Port, Channel Islands, located off the northeast coast of France in the English Channel.

back to Current Journal