With a metro population exceeding 575,000, Belfast is the capital of and the largest city in Northern Ireland; it's also its center of industry and economic engine.

Belfast is also a major seaport, with commercial and industrial docks dominating the shoreline. Those docks include the famous Harland and Wolff shipyard - the company which built the ill-fated RMS Titanic.

The city is compact and easy to get around in, whether by car or on foot. Like all capital cities, Belfast offers a wide range of accommodations, and is teeming with a multitude of stylish bars, gourmet restaurants, trendy clubs and some of the best shopping in the UK.

Belfast suffered greatly during the period of conflict and destruction called "The Troubles"- sectarian conflicts between its Roman Catholic and Protestant populations. In recent weeks there has been some scattered violence, however, over the last few years there's been a sustained period of calm, free from the intense political violence of former years 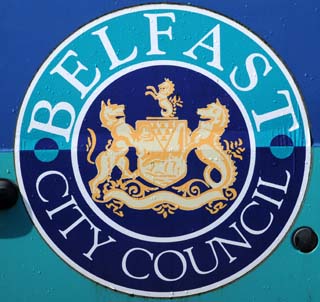 I love this statue and a picture does not do it justice. It's named Harmony, and it was created by the Scottish artist, Andy Scott. 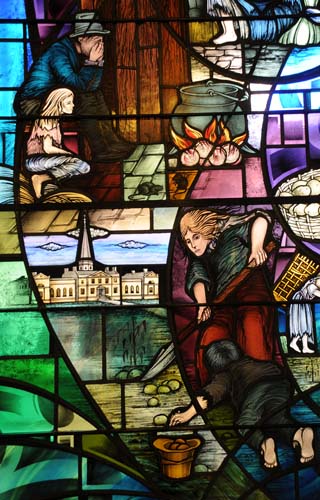 This most impressive stained glass window inside the Belfast City Hall was commissioned to commemorate the plight of all citizens of Belfast who died as a result of the thphus and cholera epidemic in the mid-1840s. All were laid to rest in a common grave. 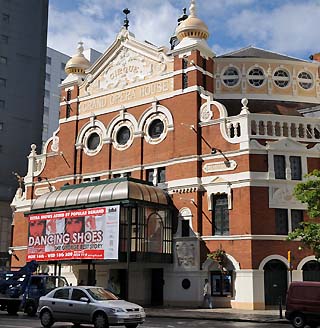 The Grand Opera House in Belfast, opened in 1895. It was designed by the most prolific theatre architect of the period, Frank Matcham, and according to the Theatres Trust, its "magnificent auditorium is probably the best surviving example in the United Kingdom of the oriental style applied to theatre architecture." 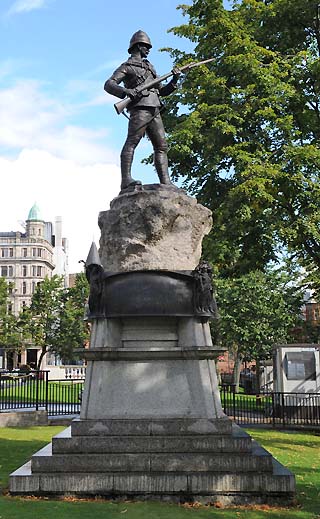 This is one of the many monuments that grace the grounds of the Belfast City Hall. This one is in tribute to the men and women of the military that have fallen in battle. 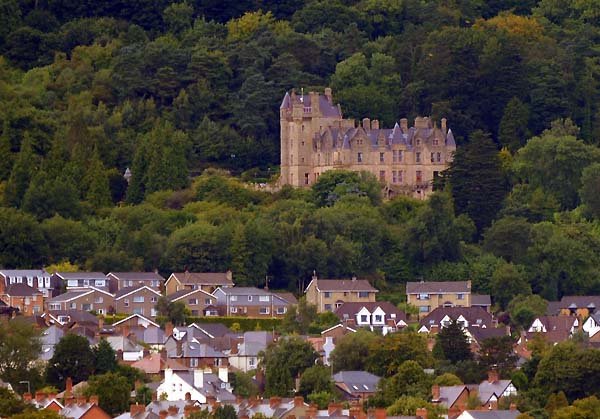 In the hills above the row houses of northeastern Belfast stands Belfast Castle. It sits on the slopes of Cavehill Country Park, in a prominent position some 400 feet (120 m) above sea level. Its location provides unobstructed views of the city of Belfast. 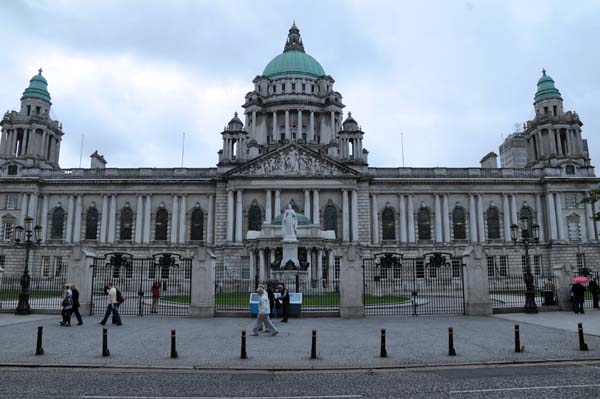 Belfast City Hall is the civic building of the Belfast City Council. Located in Donegall Square in the city center, this imposing building contains many monuments and works of art. The city hall in Durban, South Africa is almost an exact replica of Belfast's City Hall. It was built in 1910 and designed by Stanley G. Hudson, who was inspired by the Belfast design. 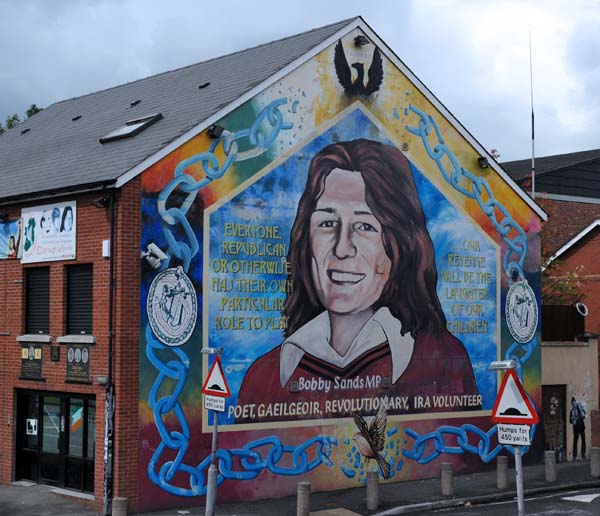 Long an activist against the British in Northern Ireland, Bobby Sands was an Irish volunteer of the Provisional IRA and member of the United Kingdom Parliament who died in HM Prison Maze after 66 days of a hunger strike. He was 27, and his mural in Belfast honors his memory as a Irish hero. 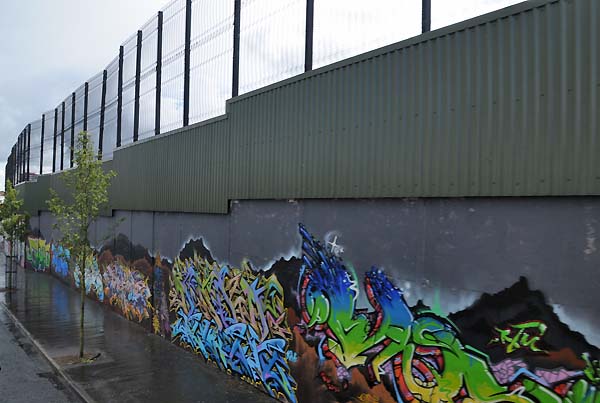 Peace Lines (or walls) like this one are a series of separation barriers ranging in length from a few hundred yards to over three miles (5 km), separating Catholic and Protestant neighborhoods in Belfast. The stated purpose of the barriers is to minimize intercommunal sectarian violence between Protestants and Catholics. Some have gates in them occasionally manned by police, which allow passage by day, and which are closed at night.

In 2008 a public discussion began about how and when the barriers could be removed. Many of the residents who live in the communities beside the peace lines have expressed their anger at any suggestion that they will be taken down. 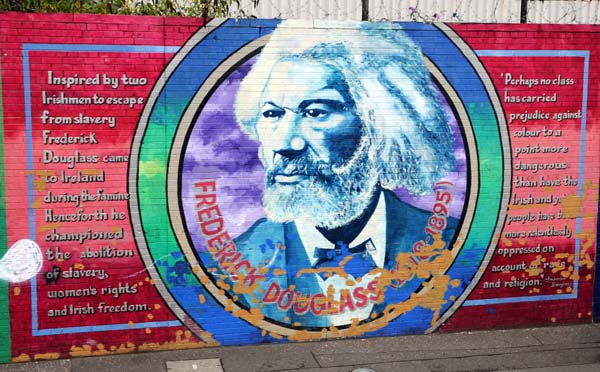 Frederick Douglass was an American social reformer, orator, writer and statesman. After escaping from slavery, he became a leader of the abolitionist movement, gaining renown for his dazzling oratory and incisive antislavery writing. Douglass also actively supported women's suffrage. Following the Civil War, he worked on behalf of equal rights for freedmen, and held multiple public offices. His classic autobiography, Life and Times of Frederick Douglass, is one of the best known accounts of American slavery.

This mural celebrates his trip to Ireland. 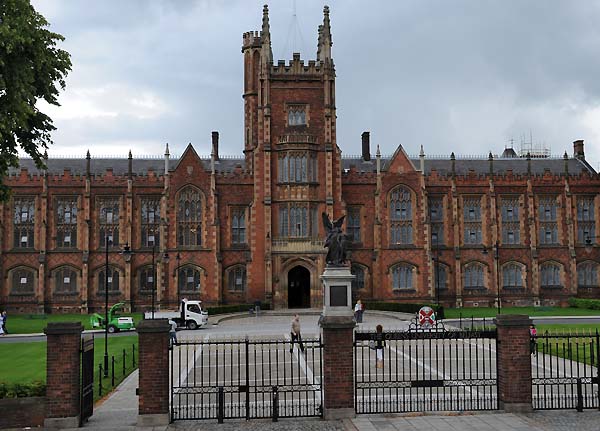 Queen's University Belfast in Belfast, Northern Ireland was first called Queen's College. The main building (shown) has roots that go back to 1810. 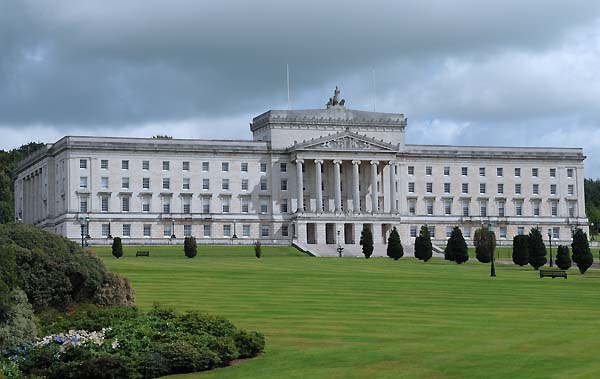 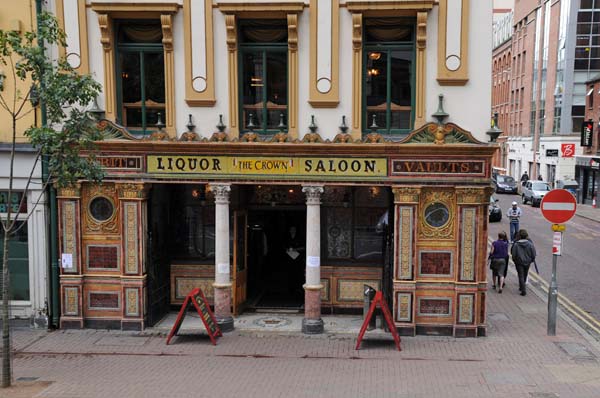 Originally opened by Felix O'Hanlon and known as The Railway Tavern, the Crown pub owes its elaborate tiling, stained glass and woodwork to the Italian craftsmen whom Flanagan persuaded to work on the pub after hours.

In 1978 the National Trust, following persuasion by people including Sir John Betjeman, purchased the property and three years later completed a £400,000 renovation to restore the bar to its original Victorian state. Further restoration by the National Trust was done in 2007 at a cost of £500,000.

A recognizable landmark of Belfast, the pub has featured as a location in numerous film and television productions, and I was told that it serves (on average) over 2,000 pints of beer each day. And yes, I enjoyed mine.