The Charles Bridge is a famous historic bridge that crosses the Vltava river in Prague, Czech Republic. Its construction started in 1357 under the auspices of King Charles IV, and finished in the beginning of the 15th century.

As the only means of crossing the river Vltava until 1841, the Charles Bridge was the most important connection between Prague Castle and the city's Old Town and adjacent areas. This "solid-land" connection made Prague important as a trade route between Eastern and Western Europe.

The bridge is 621 meters long and nearly 10 meters wide, resting on 16 arches shielded by ice guards. It is protected by three bridge towers, two of them on the Lesser Quarter side and the third one on the Old Town side. The Old Town bridge tower is often considered to be one of the most astonishing civil Gothic-style buildings in the world.

The bridge is decorated by a continuous alley of 30 statues and statuaries, most of them baroque-style, originally erected around 1700 but now all replaced by replicas. Many of the originals can be seen in the Lapidarium Museum.

Charles Bridge is on the top of every Prague visitor's must-see list. It is also popular with Czech artists, musicians and souvenir vendors whose stands line both sides of the bridge year-round. A great time of day to come to the bridge is at sunset when one can enjoy a breathtaking view of the fully lit Prague Castle against the evening sky. 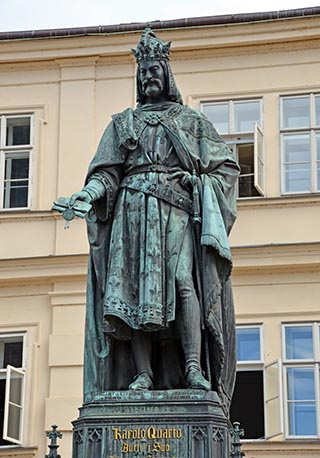 Charles IV statue at the eastern entrance to his namesake, the Charles Bridge. 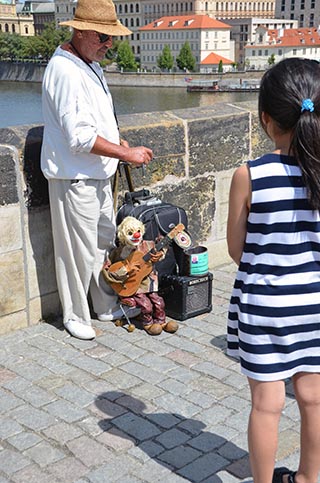 One of the many entertainers on the Charles Bridge. 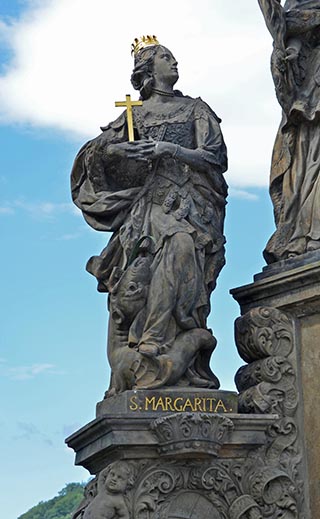 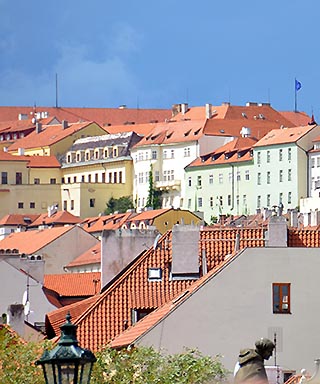 A view toward Castle Hill from the Charles Bridge. 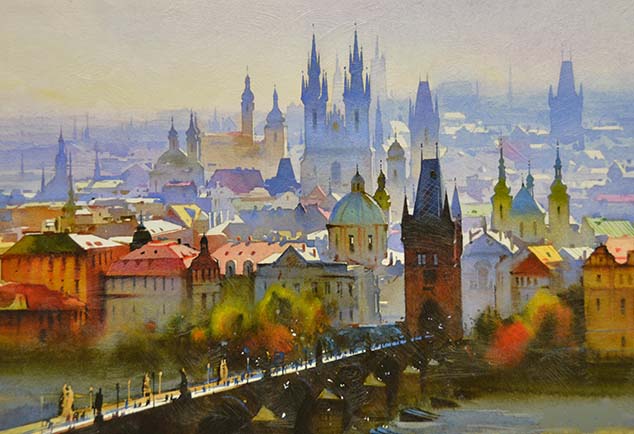 While spending some time in Prague I purchased this fabulous watercolor highlighting the Charles Bridge and many of the fairytale-like spires within its "Old Town." Good quality, affordable artwork is everywhere in the city. 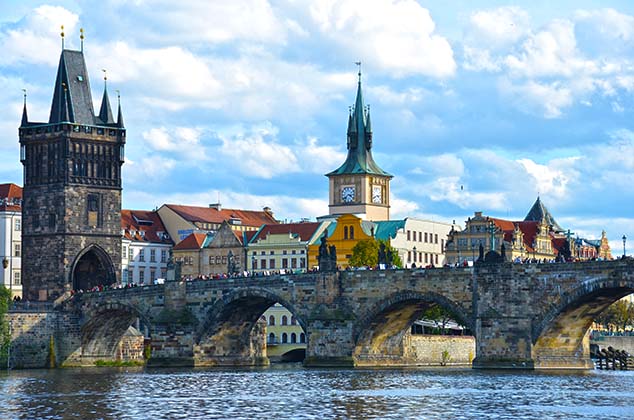 The eastern part of the Charles Bridge on a beautiful day; the Old Town bridge tower is center left. 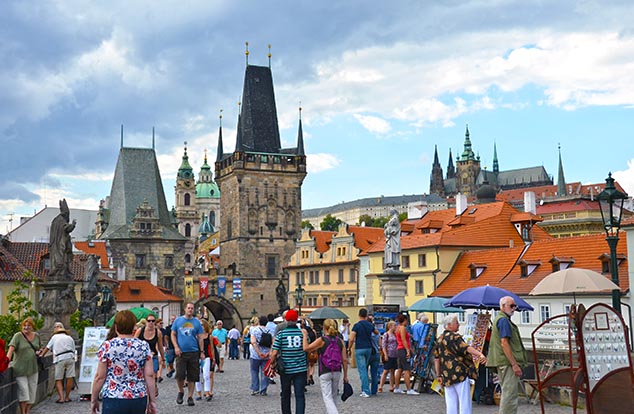 Walking to the west across the Charles Bridge, Prague castle is seen atop the hill, upper right. At the end of the bridge people pass under two of the Gothic-style bridge towers into what is called the Lesser Quarter of the city. 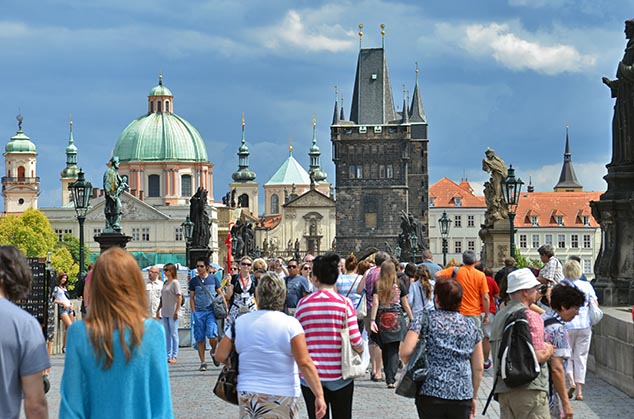 Walking to the east across the Charles Bridge, the Old Town bridge tower comes into view; often considered to be one of the most astonishing civil Gothic-style buildings in the world. And here, Prague's nickname as “The city of a hundred spires” seems quite easy to believe, because in fact...it is true. 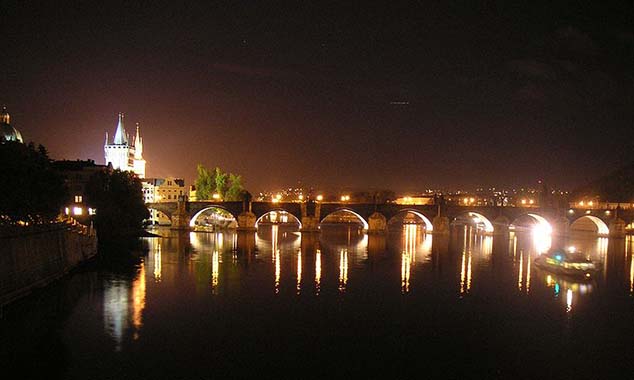 This is a view of the Charles Bridge at night. It is a great place for photographers in the evening as many of the medieval buildings and the Prague Castle are brightly lit. 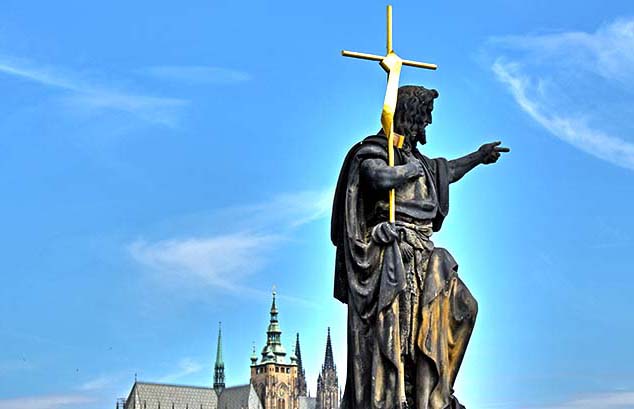 Sculpted in 1857 by Josef Max, this is a statue of St. John the Baptist holding a golden cross on the Charles bridge, Prague, Czech Republic. The Prague Castle is in the background. 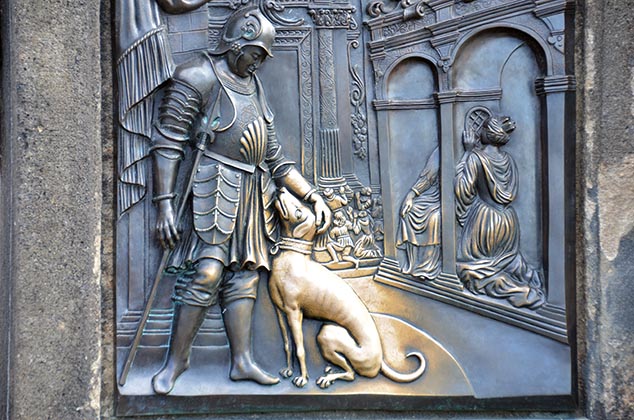 The hand-polished relief of a man and dog at the base of the St. John of Nepomuk statue on the Charles Bridge in Prague, Czech Republic. Visitors have rubbed the relief in the belief that doing so means that they will return to Prague one day. I rub it every time I cross the bridge. 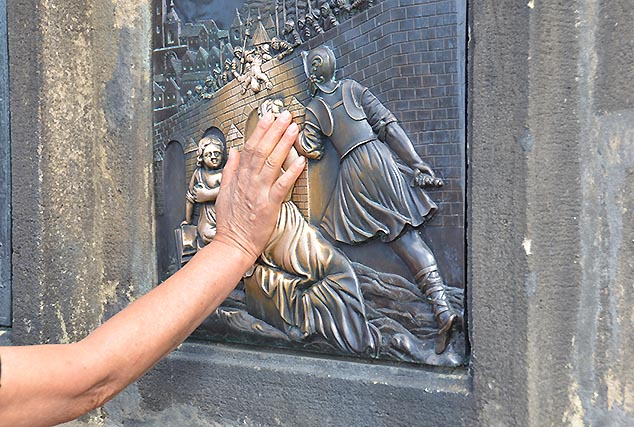 As you can see, rubbing reliefs on the Charles Bridge is a very common practice. 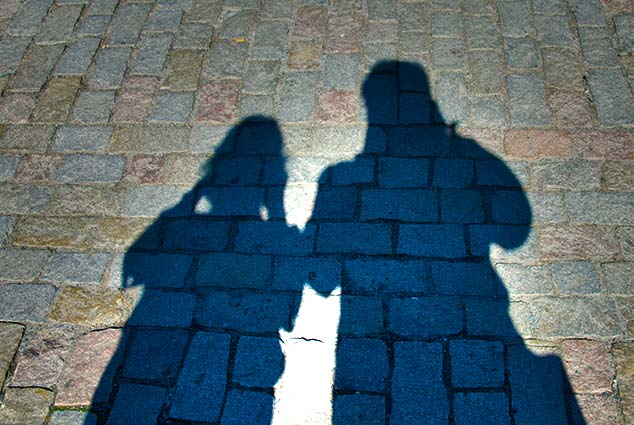 Shadows on the Charles Bridge on a very sunny day.