Vienna is the capital and largest city of Austria and one of the nine states of Austria. It is by far the largest city in Austria, as well as its cultural, economic, and political center.

It is regarded as the "City of Music" because of its musical legacy from the great age of Viennese Classicism. Many notable musicians were born in Vienna, including: Johann Strauss I, Johann Strauss II, Falco, Franz Schubert, Gerhard Potuznik, Louie Austen, Arnold Schönberg, and Fritz Kreisler. Notable Musicians who came here to work from other parts of Austria and Germany were Wolfgang Amadeus Mozart, Ludwig Van Beethoven, Johannes Brahms, Gustav Mahler and Joseph Haydn.

The Historic center of Vienna is rich in architectural ensembles, including Baroque castles and gardens, as well as the late-19th-century Ringstrasse lined with grand buildings, monuments and parks.

Vienna stands out among other European tourist destinations for being a "new old city", a city in transition from an older "picture city" like Florence and Venice to being a global city like Paris and London. 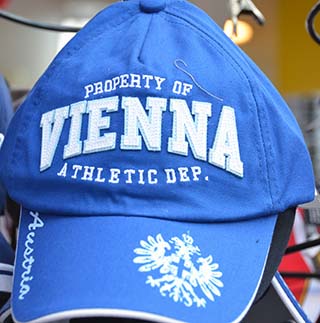 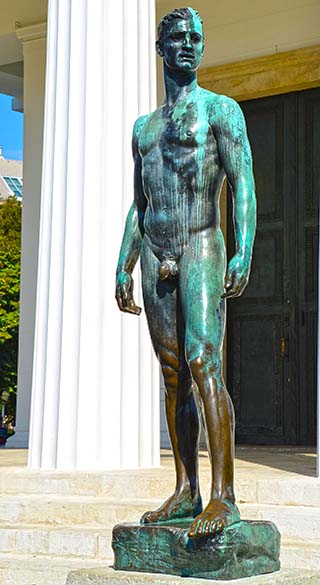 This is a statue found on the edge of the Theseus Temple, a replica of a Greek temple on display in Volksgarten, Vienna. Note its position in the photo upper right. 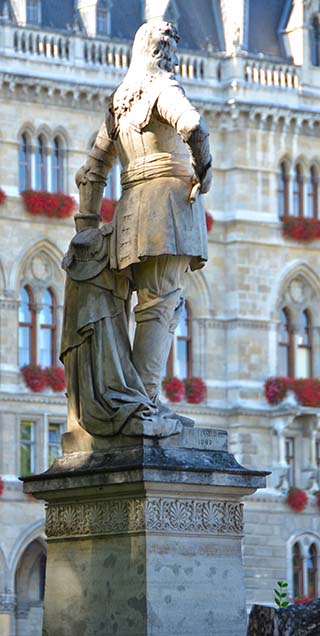 One of the dozens of statues at the Rathaus in Vienna. 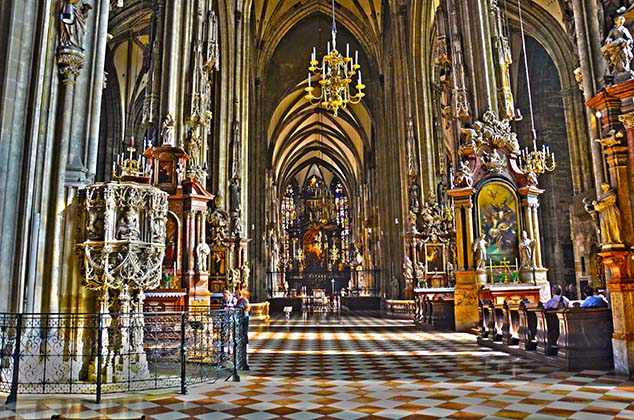 To enhance the interior colors, this is an (HDR) high dynamic range image of St. Stephen's Cathedral in Vienna. It is Austria's most eminent Gothic edifice, housing a wealth of art treasures. It is the mother church of the Archdiocese of Vienna and the seat of the Archbishop of Vienna. As the most important religious building in Austria's capital, the cathedral has borne witness to many important events in that nation's history and has become one of the city's most recognizable symbols. Note the ornate pulpit center left. 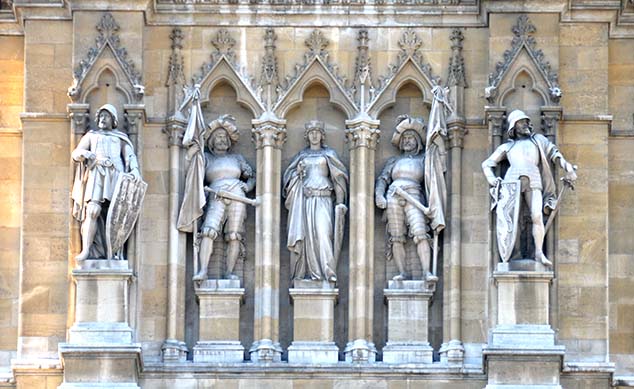 The Rathaus, the seat of the mayor and city council of the city of Vienna, is adorned on all sides with statues, mostly depicting Habsburg notables. Some are quite striking, including this group above the main entrance. 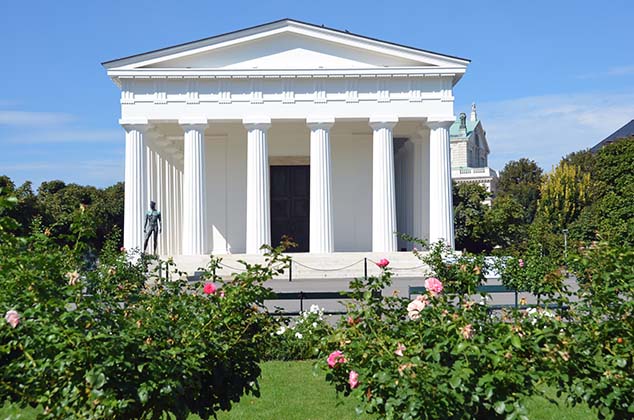 Volksgarten is an elegant Vienna park, long a favorite gathering place for the aristocracy. It is laid out in French formal style with geometric flowerbeds and a beautiful rose garden. A number of decorative fountains and interesting monuments embellish the park. The focal point however is the Theseus Temple, a replica of a Greek temple, originally built between 1820 and 1823 by Peter von Nobile, an Austrian architect. 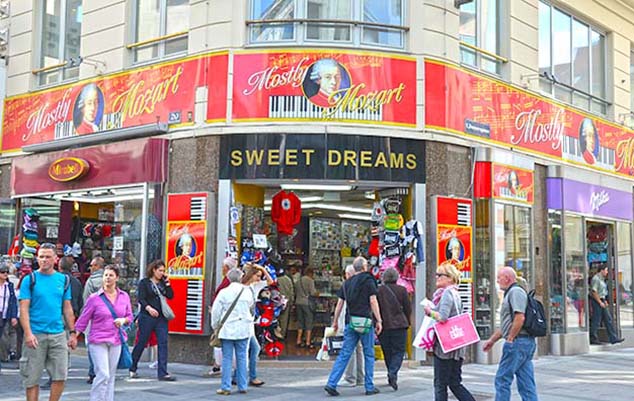 During his final years in Vienna, Mozart composed many of his best-known symphonies, concertos, and operas, and portions of the Requiem, which was largely unfinished at the time of his death. The circumstances of his early death have been much mythologized, but he still remains a major tourist attraction in this "City of Music." 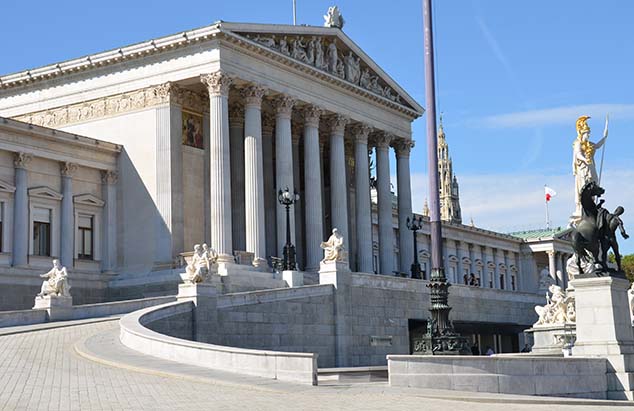 The Austrian Parliament Building in Vienna is where the two Houses of the Parliament of Austria conduct their sittings. One of the building's most famous features is the Athena fountain in front of the main entrance, which is a notable Viennese tourist attraction. Following heavy damage and destruction during the Second World War, most of the interior has been restored to its original splendor. 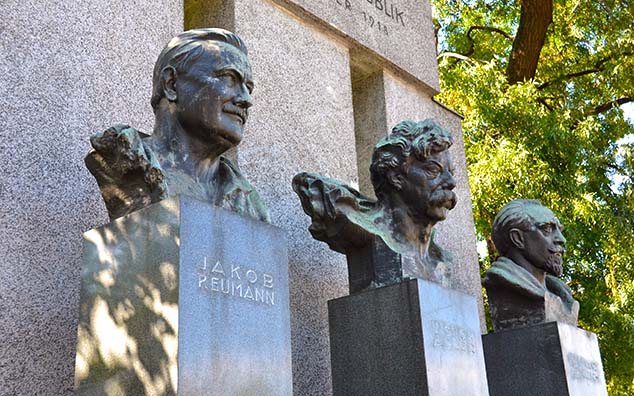 This is the "Monument to the Republic" in Vienna, Austria. The monument is quite striking and pays tribute to Victor Adler, Jakob Reumann and Ferdinand Hanusch, all of whom played very important roles in the establishment of the Austrian Republic on November 12, 1918. These men were all for social reform and for improving the conditions of the workers. 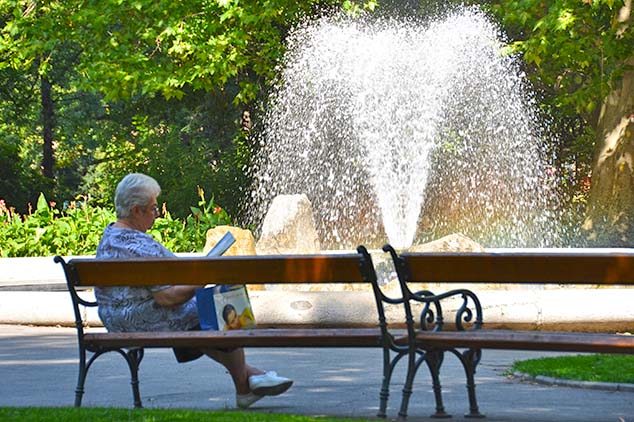 On a beautiful Sunday afternoon in Vienna, a park bench in a quiet corner is the place to be.