Vienna is the capital and largest city of Austria and one of the nine states of Austria. It is by far the largest city in Austria, as well a cultural, economic, and political center.

It is regarded as the "City of Music" because of its musical legacy from the great age of Viennese Classicism. Many notable musicians were born in Vienna, including: Johann Strauss I, Johann Strauss II, Falco, Franz Schubert, Gerhard Potuznik, Louie Austen, Arnold Schönberg, and Fritz Kreisler. Notable Musicians who came here to work from other parts of Austria and Germany were Wolfgang Amadeus Mozart, Ludwig Van Beethoven, Johannes Brahms, Gustav Mahler and Joseph Haydn.

The Historic center of Vienna is rich in architectural ensembles, including Baroque castles and gardens, as well as the late-19th-century Ringstrasse lined with grand buildings, monuments and parks.

Vienna stands out among other European tourist destinations for being a "new old city", a city in transition from an older "picture city" like Florence and Venice to being a global city like Paris and London. 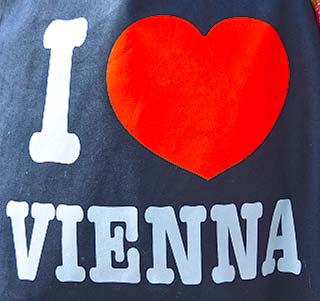 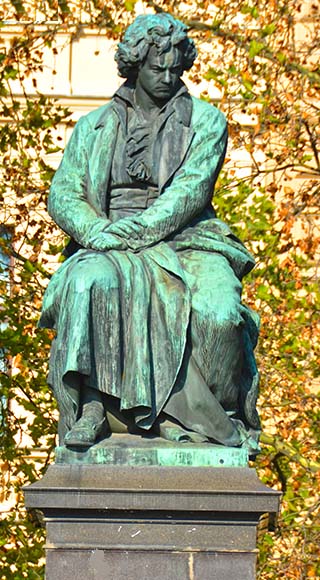 Beethoven moved to Vienna in 1792 and began studying with Haydn, quickly gaining a reputation as a virtuoso pianist. He lived in Vienna until his death. 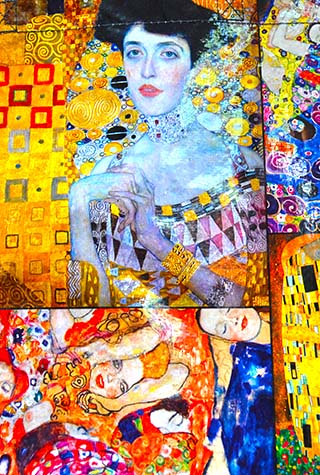 Gustav Klimt was an Austrian symbolist painter and one of the most prominent members of the Vienna Secession movement. Klimt is noted for his paintings, murals, sketches, and other art objects. Klimt's primary subject was the female body. 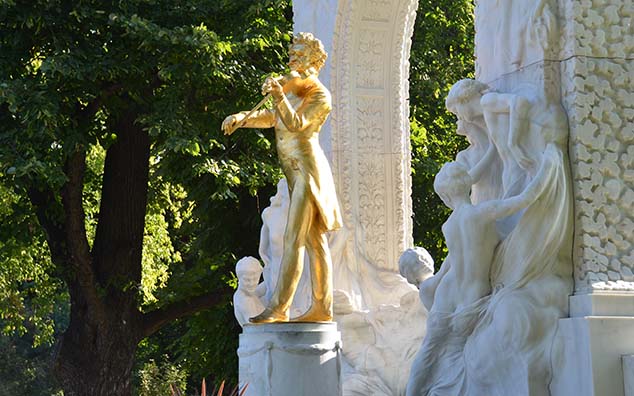 Johann Strauss II, was an Austrian composer of light music, particularly dance music and operettas. He composed over 500 waltzes, polkas, quadrilles, and other types of dance music, as well as several operettas and a ballet. In his lifetime, he was known as "The Waltz King", and was largely then responsible for the popularity of the waltz in Vienna during the 19th century. Some of his most famous works include The Blue Danube, Kaiser-Walzer and Tales from the Vienna Woods. This is an HDR (high dynamic range) photo image of a very-famous statue of Strauss in Stadtpark, Vienna. 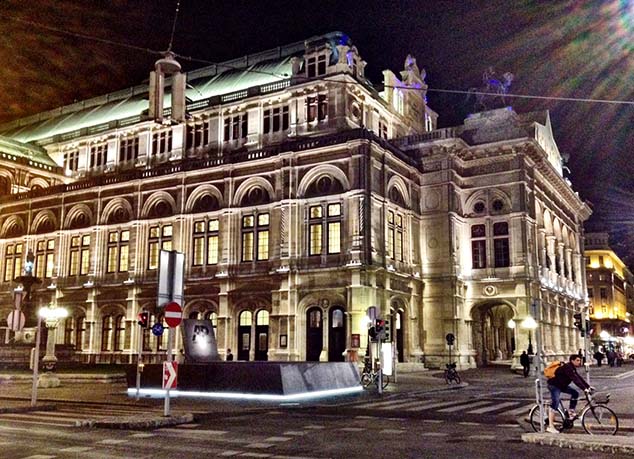 The Vienna State Opera is one of the busiest opera houses in the world, producing 50 to 60 operas per year and ten ballet productions in approximately 300 performances. It is quite common to find a different opera being produced each day of a week. As such, it employs over 1000 people and there is a performance nearly every day for ten months of the year. 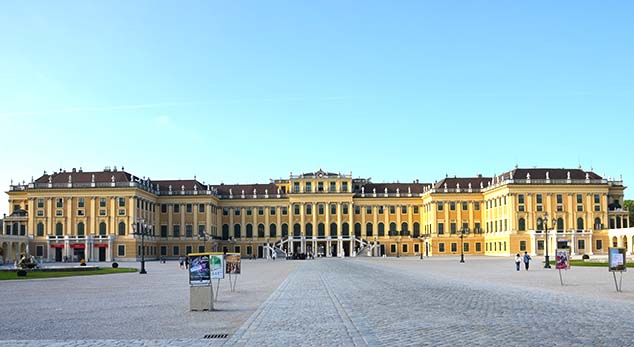 This is Schonbrunn Palace, a former imperial 1,441-room royal summer residence in modern Vienna, Austria. One of the most important cultural monuments in the country, since the 1960s it has been one of the major tourist attractions in Vienna. Franz Joseph I, the Emperor of Austria, King of Bohemia, King of Croatia, Apostolic King of Hungary, King of Galicia and Lodomeria, and Grand Duke of Cracow lived here until his death in 1916. 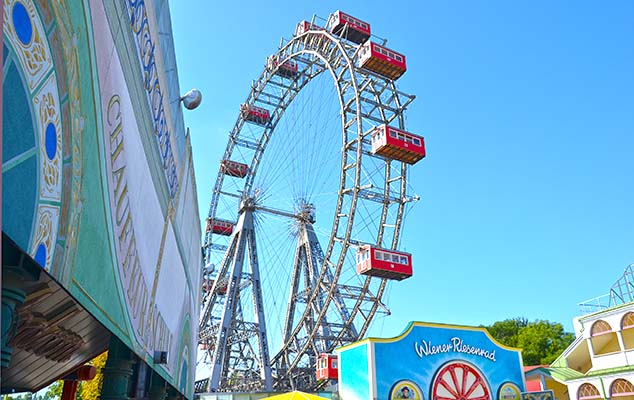 This Giant Ferris Wheel was erected in 1897 on the occasion of the 50th anniversary of Emperor Franz Joseph accession to the throne. It is one of Vienna's landmarks and the central point of the world-famous Prater amusement and leisure park in Austria's federal capital. The Giant Ferris Wheel has a height of 65 meters, and offers a magnificent view of Vienna. It has 15 cabins, eight of which have been designed in the style of important historic eras ranging from the Roman Empire to the mid-20th century. People do book the luxurious "Art Nouveau" cabin for their dream wedding, and on summer weekends, the line to buy tickets for a 15 minute ride is very long. 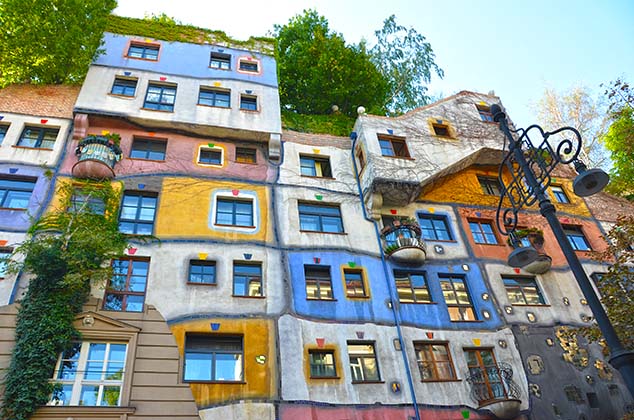 This is a part of the "Hundertwasserhaus" an apartment house in Vienna, Austria, built after the ideas and concepts of Austrian artist Friedensreich Hundertwasser with architect Joseph Krawina as a co-author. This expressionist landmark of Vienna includes 52 apartments, four offices, 16 private terraces and three communal terraces. It is one of Vienna's most visited buildings and has become part of Austria's cultural heritage. I was there early this morning and it was packed with tourists. 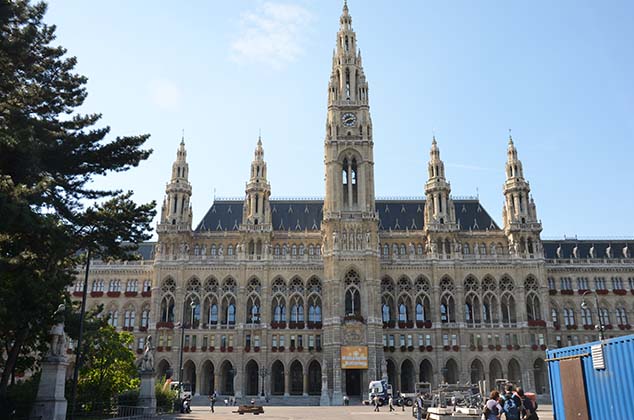 One of the most imposing buildings in all of Vienna is the Rathaus, a building which serves as the seat of the mayor and city council of the city of Vienna. The town hall also serves as the Assembly Hall for the State of Vienna, a state with the Austrian federal system. The Rathaus was designed by Friedrich von Schmidt in the Gothic style, and built between 1872 and 1883. 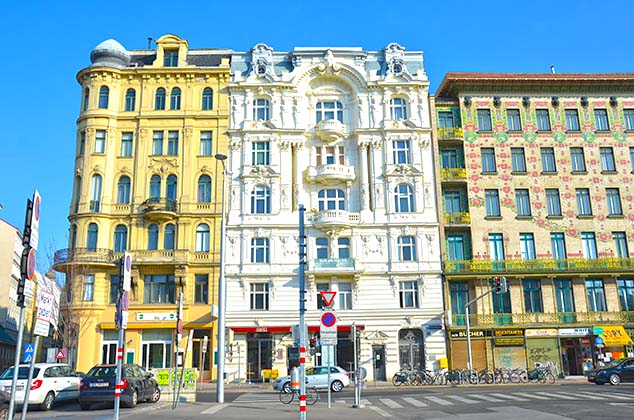 A variety of architectural styles can be found in Vienna, such as the Romanesque Ruprechtskirche and the Baroque Karlskirche. Styles range from classicist buildings to modern architecture. Art Nouveau left many architectural traces in Vienna, and these buildings are an example of same.