During the 1960's Saigon was a hotbed of activity as artists, businessmen, journalists and spies filled the city. International intrigue stood on every corner and the city ran nonstop. Then came the Vietnam War, and Saigon changed forever.

Today this modern city of 13 million people, with 6 million scooters, presents a fascinating destination for any traveler. In Saigon you will be captivated by its Chinese and French influences, great food, and friendly, smiling people. 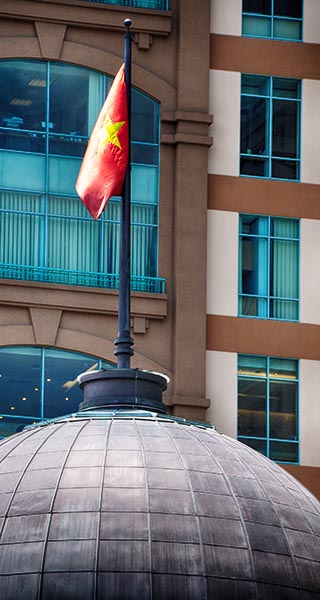 The Vietnam flag was officially adopted on November 30, 1955. The gold five-pointed star symbolizes the five groups of workers in the building of socialism (intellectuals, peasants, soldiers, workers and youths), while the red symbolizes bloodshed, and the revolutionary struggle. 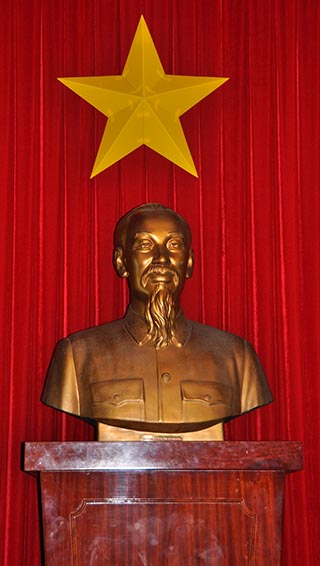 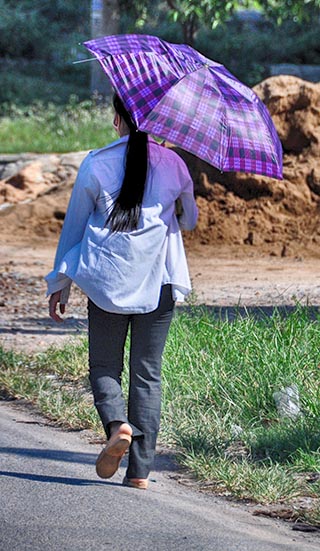 The weather in Ho Chi Minh City is often hot and sunny, so an umbrella can be most helpful. 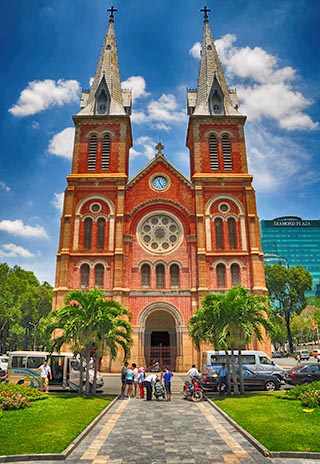 Beautiful Notre Dame Cathedral, Ho Chi Minh City. Established by French colonists, the cathedral was constructed between 1863 and 1880. It has two bell towers, reaching a height of 58 m (190 feet). 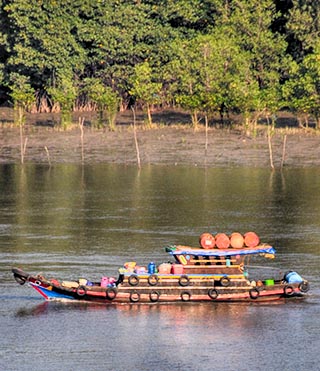 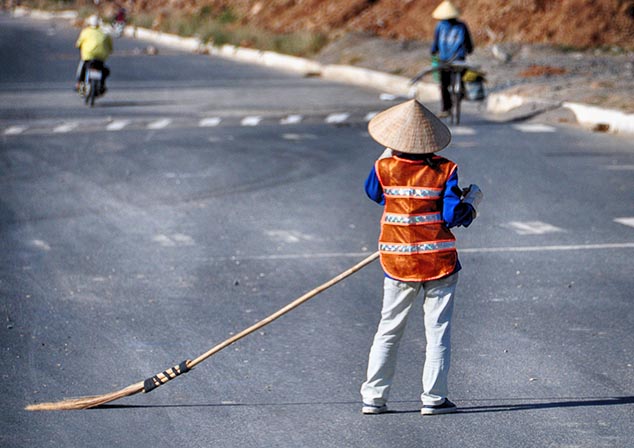 Street sweepers, most all of them wearing reflective jackets, are commonly seen across the country of Vietnam. This one was working on one of the main roads into Ho Chi Minh City (Saigon). 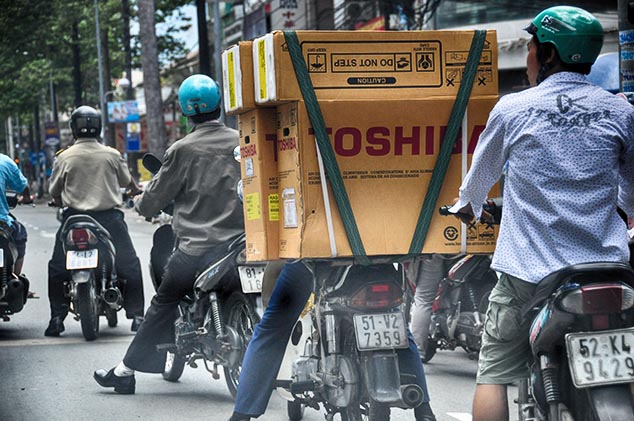 The roads of Ho Chi Minh City (Saigon) are crammed with scooters, and for most every Vietnamese a scooter is their primary means of transportation. On the real positive side, all of the Vietnamese scooter drivers wear helmets. Bikes and buses are also commonly used. 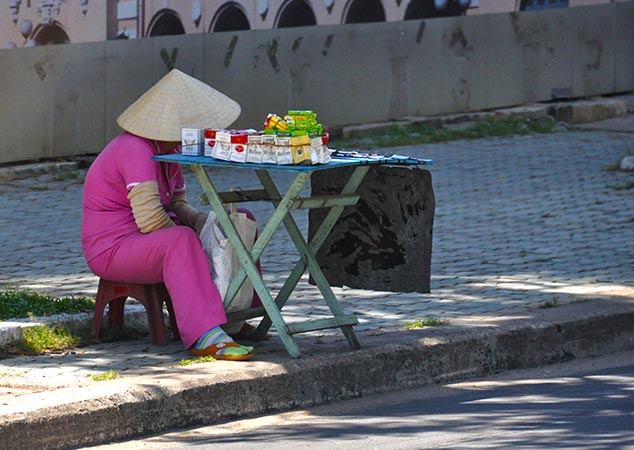 Entrepreneurs are everywhere in Saigon, and it's possible to buy just about anything right on the street. 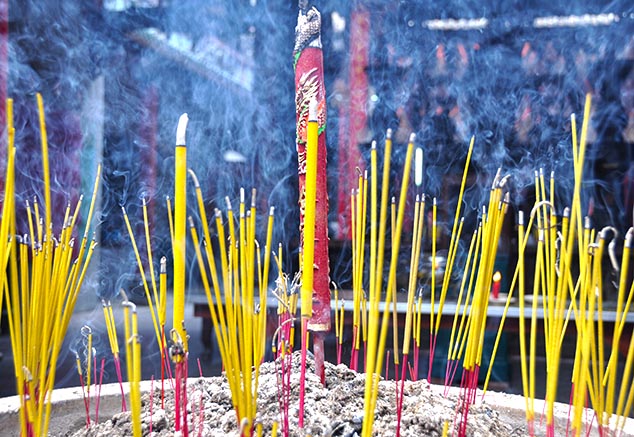 Incense sticks burning within the Nghia An Hoi Quan Pagoda in Ho Chi Minh City (Saigon). The pagoda is noteworthy for its gilded woodwork, an ornate altar and the temple's front door. It is one of the oldest pagodas in the city. As for incense, its religious use has its origins in antiquity with the first recorded use of same by the Egyptians. 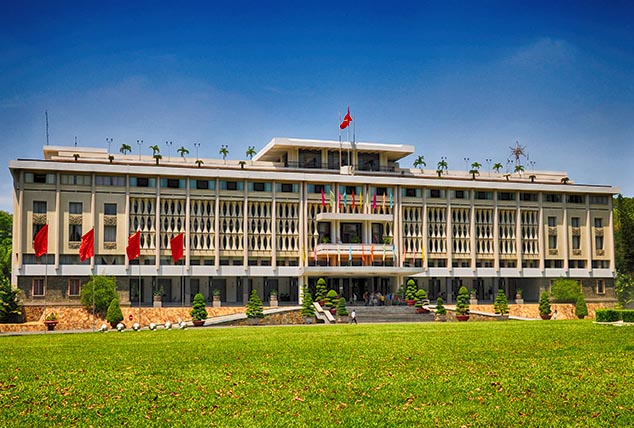 Independence Palace, also known as Reunification Palace is a frequently visited landmark in Ho Chi Minh City, Vietnam. It was the home and workplace of the President of South Vietnam during the Vietnam War. 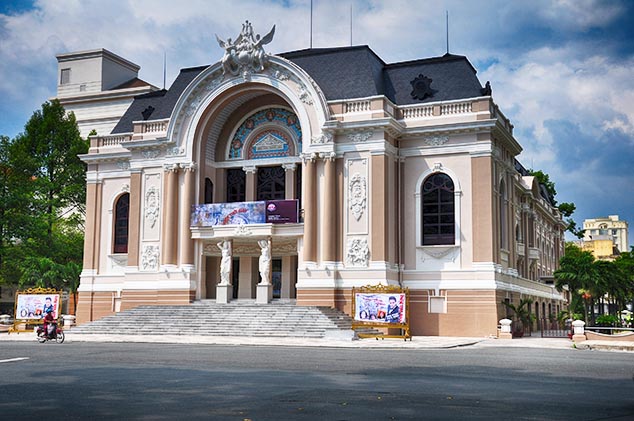 At the Saigon Opera House, sellouts are commonplace. Officially named the Municipal Theatre of Ho Chi Minh City, it is a stylish example of French Colonial architecture in Vietnam. 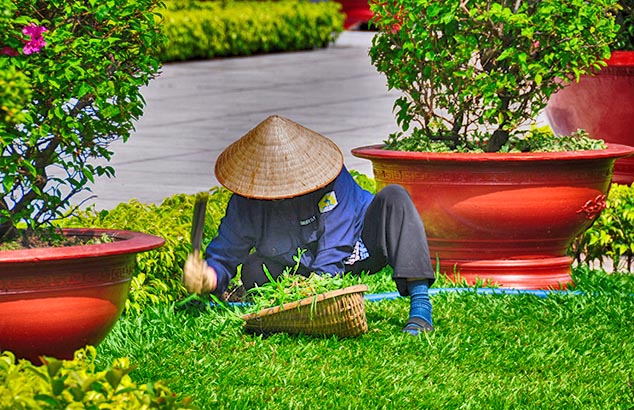 I spotted this woman working in front of the Rex Hotel in Ho Chi Minh City. The day was very hot, and she, like many outside workers, was wearing a conical Asian hat. This style of hat is used primarily as protection from Vietnam's sun and rain. When made of straw or matting, it can be dipped in water and worn as an impromptu evaporative-cooling device. 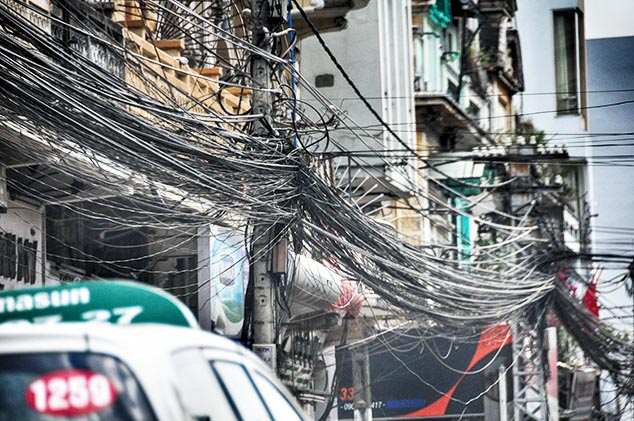 In Ho Chi Minh City (Saigon), similar to many other southeast Asia cities, this is a common sight. Along most city streets, cable, electric and telephone wires are hung en-masse. How they find one that's not working remains a mystery to me. 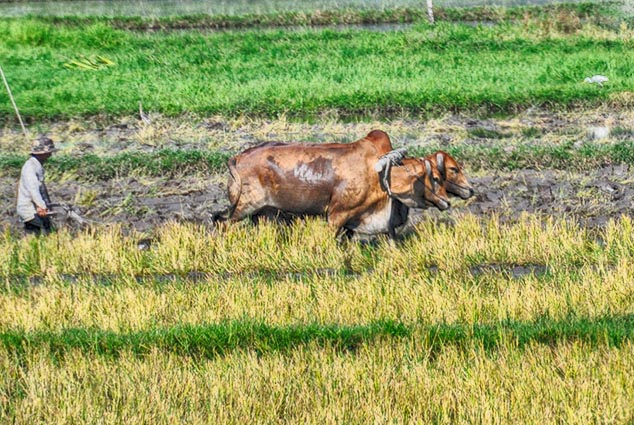 In the time-honored way a Vietnamese farmer uses a pair of oxen to plow his fields.