We arrived at the port in Coquimbo around 8am. We were delayed disembarking the ship as there was an order from the captain that all the buses that would be carrying passengers on tours or shuttles into town, had to be disinfected. We watched the crew leave the ship with all kinds of gear strapped to their backs – kind of reminded me of Ghostbusters. Unfortunately, the gastrointestinal illness has not yet been cleared up.

When we boarded the bus we were taking, the seats were damp from the disinfectant. But, we didn’t mind – knowing the ship’s crew is doing all they can to stop the spread of the illness.

When we arrived at the Tabali “stone house” Winery, we were offered a tour, followed by a tasting. The Tabali Winery is a new one – only eight years old. The vats are all stainless steel and are sparkling clean. We tasted two wines – one chardonnay and one shiraz. The chardonnay was one of the best we’ve had, so of course, we purchased a bottle to take back to the ship.

The grapes grow very well here because of the climate – when new vines are planted, it takes only two years to reap the first harvest, where in Europe, it takes five years. Due to arid conditions, irrigation is required – and over the vineyards are tubes with a ball attached every few yards. The water for the irrigation comes from the high Andes and flows through these tubes into the balls. It is called the drip irrigation system.

We drove for about 15 minutes back north to Hacienda Santa Cristina for lunch. Here we were, driving in the middle of the desert, and arrived at the Hacienda, which was truly an oasis. Beautiful flowers, lots of lawn – obviously, their irrigation system works well.

The Hacienda includes the first house, a hotel, restaurant, swimming pool and small chapel – everything is right here to make a stay enjoyable (and remote and quiet). Lunch started with a drink and appetizer by the pool: pisco sour – made differently than in Peru. Egg whites are not used – only the pisco wine, sugar and lemon. We felt safe trying these, so did – they are very strong, so about halfway through, we set our glasses down. The appetizers were fried goat cheese and cheese empanadas. Lunch was served inside the restaurant – buffet style. Lots of vegetables, rice, steak and chicken. They offered a picante sauce which was so delicious, I went back for seconds (a heaping second helping). I think one of the wait staff saw me ready to go back for thirds, so he brought me my own bowl.

After lunch, we had a tour of the house, then returned to the ship. The ride back was quiet as almost everyone napped.

Coquimbo means “quiet waters” and is located just 10 miles south of La Sarena, Chile’s second oldest city. The two cities form a metropolitan area of about 400,000 residents. Coquimbo’s natural harbor, which is one of the biggest bays in the Chilean Pacific, made it a popular destination for the Spanish and there is still today, a lot of their influence in the colonial architecture.

High atop one of the hills in Coquimbo is a very tall, concrete cross. The cross represents 2,000 years of Christianity in the area, and in fact, it’s the largest religious monument in South America. 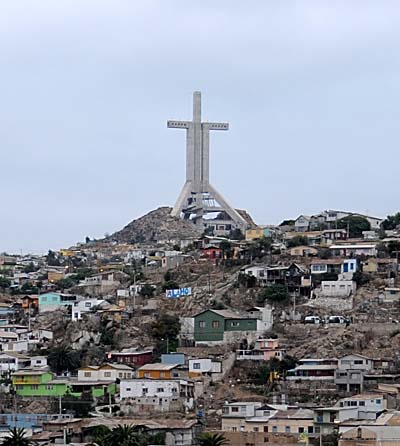 The four main industries in this part of Chile are mining, fishing, fruit agriculture and tourism. Tourism is the fastest growing segment due to the climate and the beautiful beaches. Coquimbo is very dry – the annual rainfall is around 1.5 inches. On those rare occasions that it rains (three or four times per year), schools close, people leave work. It’s almost like a holiday.

In Coquimbo, Alexandre Gustave Eiffel designed the steel church located near the port. Obviously, he was a very busy man working in both Europe and South America.

We will sail all night in order to arrive at Valperaiso tomorrow.