We arrived into port a little after 6am this morning. By 8am, the shuttle buses were available to go into town.

The name Iquique is derived from the native Aymara language meaning a “peaceful place to rest.” Its sometimes nickname the “Miami of Chile” is due to its numerous high rise beachfront hotels and condos. It’s also a major port and tourist destination with a casino, mall and duty free shopping center – one of the largest in South America. (If you’ve been to both cities, you may tend to disagree about the nickname). However, Iquique and Miami, Florida still maintain a “sister city” relationship. 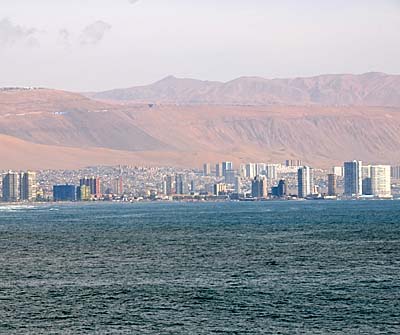 Iquique high rises along the beach. Note the desert background.

The Paseo Baquedano (Baquedano Street) is where most of the major attractions are located in downtown Iquique, with the highlights being the 19th and early 20th century architecture, best exhibited by the Georgian and Victorian mansions. The mansions were built of “pino Oregon” (Oregon Pine), which is actually Douglas fir, shipped from California and the Pacific Northwest. Although some of the homes have now been turned into restaurants and hotels, most of them remain as private residences.

Today, fishing is the major industry for Iquique, however its first claim to fame was the mining of nitrates.

Good news – the ATM machines worked. The peso exchange rate was 515 to $1.00 U.S., so getting $100 U.S. dollars equaled 51,500 pesos. Peso rich John decided to get his shoes shined at a local stand. Surprisingly for him, and for me, most of the local customers take their shoes and socks off while their shoes are polished. A creature of habit, John decided to leave his shoes on, which worked just fine.

Rainfall is virtually non-existent in Iquique. Last year it received a grand total of 2 inches, so daily irrigation of gardens and trees is a must.

Just outside of Iquique is Humberstone, a desert ghost town, a UNESCO World Heritage site. Its most unique attraction is the town’s iron swimming pool, constructed from an old ship’s hull. Nearby, at 6,000 ft. in the Andes Mountains is the small town of Pica Oasis. It dates back to pre Columbian times, and according to John, was a real photographer's paradise.