For both of us, this was a very exciting day – We’ve been through locks many times, but never on a ship of this size through the famed, historic Panama Canal. The Panama Canal is about 80 kilometers (50 miles) long, so it took the entire day to travel.

Here’s a helpful map of the Panama Canal.

As scheduled, we arrived at the Cristobal breakwaters around 5am and waited for clearance to pass. By 6:30, we were at the Gatun Locks and began our passage through to Gatun Lake. The water lift in the Gatun Lock took us up 26 meters (85 feet) above sea level to Gatun Lake. This lock is comprised of three chambers which form the three levels needed to climb up to Gatun Lake. 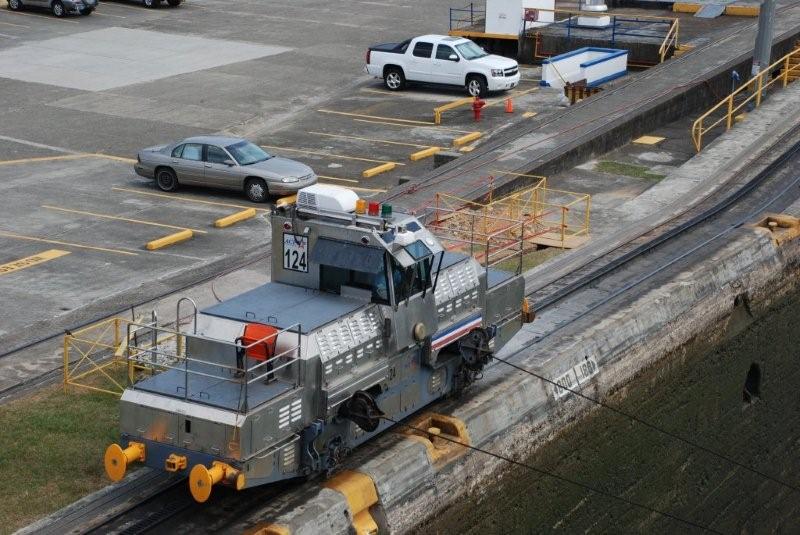 We reached the second lock, Pedro Miguel, around 1pm. This lock has one chamber, rising approximately nine meters (29 ½ feet) to the level of Miraflores Lake. It only took about 45 minutes to get through this lock. We reached the Miraflores Lock about 45 minutes later. Miraflores Lock has two chambers forming two levels to either ascend or descend. Since we were headed for the Pacific Ocean, we descended to sea level. The gates on this lock are the tallest of the Panama Canal system, due to the Pacific’s tide variations.

There were many ships waiting for their turn to transit. We did learn that a limited number of vessels are allowed to make reservations, up to a year in advance, by paying a preferential fee. Obviously, since we did not have to wait, Holland America paid the fee.

The fees for the ships carrying cargo can get to be very expensive. They are charged by the tonnage, and the average fee is upwards of $35,000. The highest fee ever paid was by the Norwegian Pearl - $300,000. The fees must be paid in advance of the transit. And, we think toll roads in the U.S. are expensive! However, if the ships did not have the opportunity to use the Panama Canal, depending on where there are going, the trip could be an additional 20 days – “time is money”. So, obviously, the canal saves these companies a lot of time, wages, fuel, etc. which translates into money.

A new canal is being built to accommodate larger ships. We could see the construction off in the distance when we reached the Miraflores Lock. It should be completed in 2015. The project costs will exceed $5.25 billion (U.S.). There is a great concern about the it in that the deforestation of the area for the new canal is causing record low levels of water in Gatun Lake.

We arrived in our port of Fuerte Amador (Panama City) early evening. We are staying here overnight and most of tomorrow – departing around 5pm. We plan to head into the city and explore mid-morning.