It is without question one of the most magnificent port cities on the planet. Sailing into its arms is an experience that no one would ever forget


Rio de Janeiro is world famous for many things, but the most significant ones certainly must include Copacabana and Ipanema beaches, an unrivaled Carnival celebration, infectous samba music, some of the best soccer teams to ever play the game, Christ the Redemmer statue high atop Corcovado mountain, enormous granite peaks in all directions, incuding Sugarloaf mountain, the #1 tourist attraction in the city.

Rio itself is home to some seven millon people, known locally as cariocas. And like so many of the large cities of the world, Rio is a mixture of wealth and poverty. However, this mass of humanity blends very well together; their mood is casual, friendly and very welcoming.

In 2014 the city will host the FIFA (soccer) world cup, and in 2016, the Summer Olympics come to Rio. The world is traveling to Rio de Janeiro, and you should too! 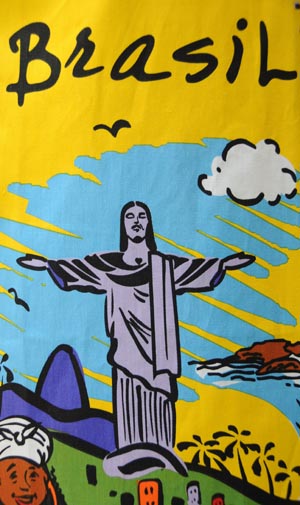 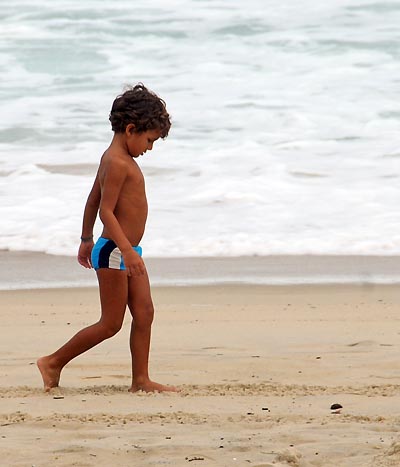 On Ipanema Beach I noticed this young boy enjoying the day. "He was so tan and so handsome," I decided to call him the "Boy from Ipanema." 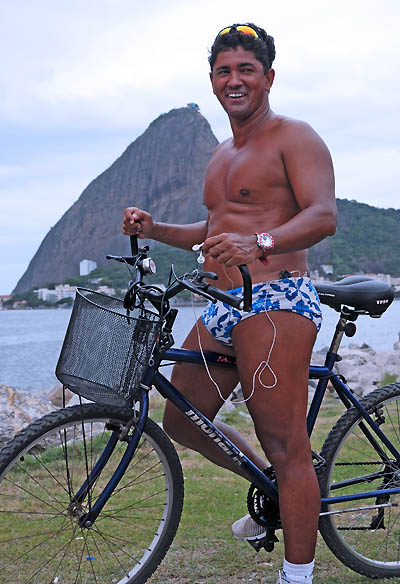 I was only in Rio for two days and already I'm totally tan. In addition, I now wear a modest Speedo, and bike up and down the beach giving tourists some tips. That's Sugarloaf Mountain in the background. 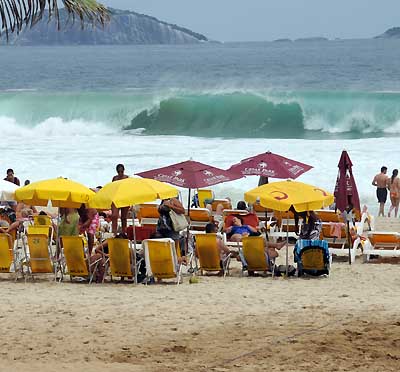 On Saturday, February 27, 2010, the day after the massive earthquake in Chile, enormous waves were crashing ashore on all of Rio's beaches. Coincidence? No one seemed to know. 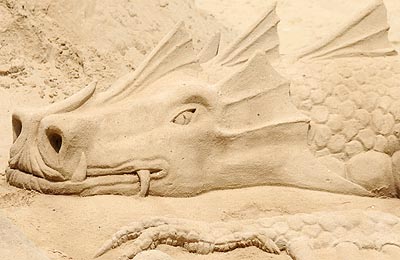 Sand sculptures are common along Rio's beaches. Some, quite frankly, are rather risque. This dragon was most impressive; note the claw. 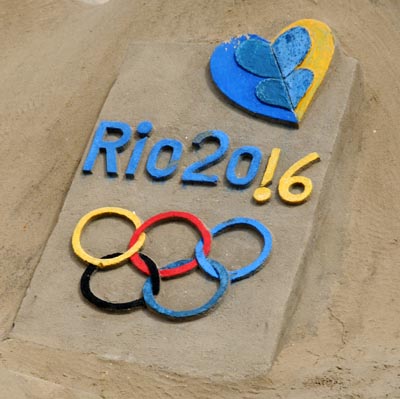 And speaking of sand sculptures, this one indicates that the 2016 Olympic Summer Games will be staged in Rio de Janeiro. 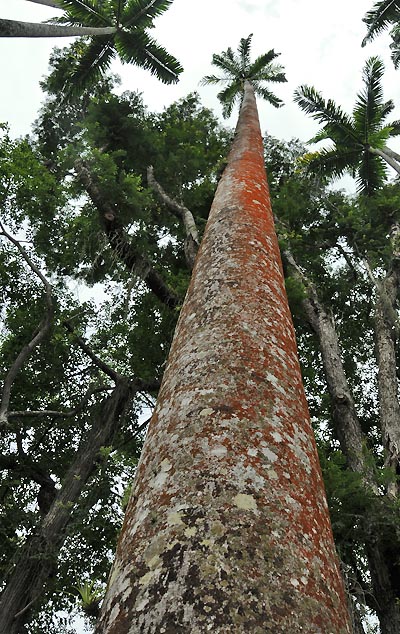 This is a 120-foot-tall Royal Palm Tree in Rio's Botanical Gardens. 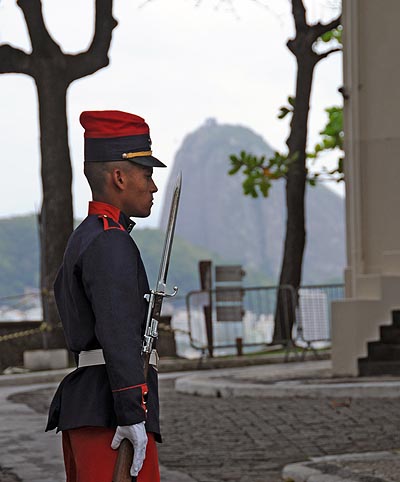 A well-dressed military guard stood watch at the entrance to Fort Copacabana. 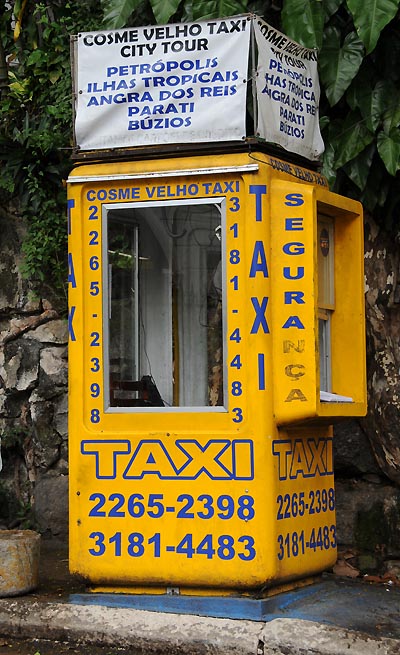 The city has thousands of taxis and finding a taxi stand is a no-brainer. 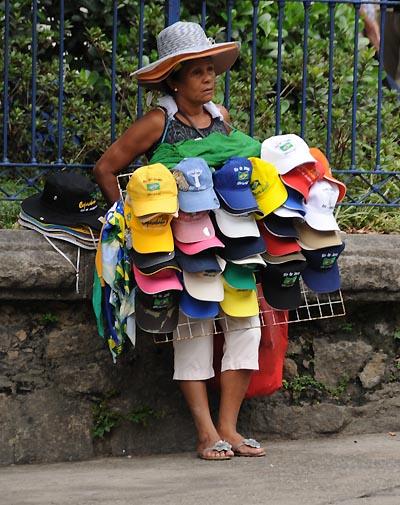 Hats are for sale all over the city, and in Rio, where summer days are very hot and mostly sunny, some sort of head covering is a must. This woman seemed a bit depressed by it all. Maybe she wore too many hats. 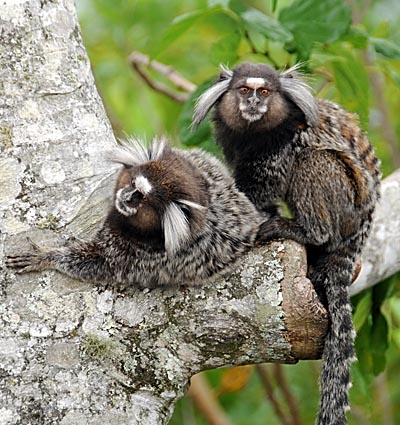 OK. I give up. How did monkeys get on this page? Well, on the top of Sugarloaf Mountain, very wild Marmoset monkeys swing from tree to tree, and well, it was difficult not to take a few pictures. Note the ear hair. 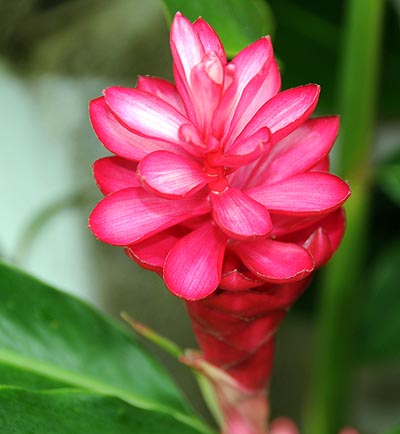 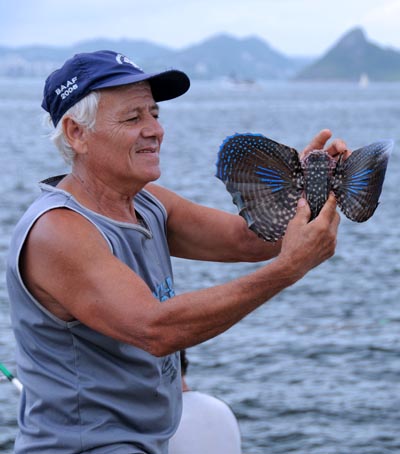 On water's edge this man displayed a bird fish that he'd just caught. It was the most colorful fish I'd ever seen. It was pinkish-red on the bottom side, and it really glistened. After I took my photo he returned it to the sea. 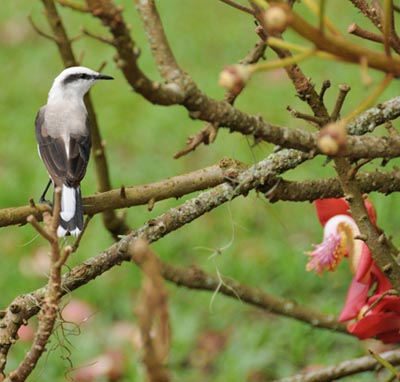 This unidentified bird caught my attention in Rio's Botanical Garden. Two of them (probably mates) were busy little beavers eating the remaining tangerine flowers off the tree. See below for a close up of that stunning flower, and it did have a citrus-like fragrance. 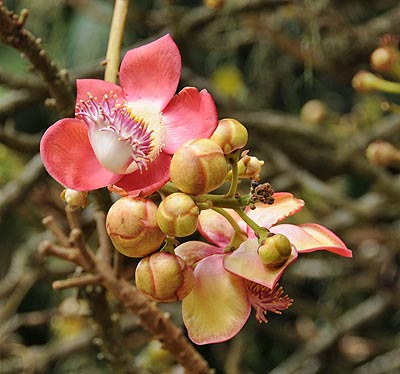 My guide told me that this is a Tangerine flower, so I took her word for it. 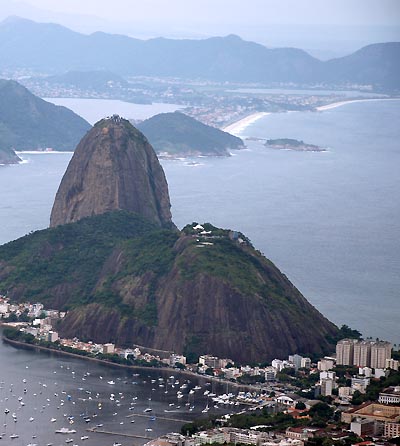 This is Sugarloaf Mountain, it's 1,300 ft. high and from the summit, spectacular views stretch out in all directions. To get to the top you must ride a somewhat precarious cable car, but in the end it's a very worthwhile trip. Note the three tan buildings to the lower right. From there you take a cable car to the small peak (the one with the white buildings on top). Once there, you and 60 other brave souls ride a gondola car into the heavens above. Wow! 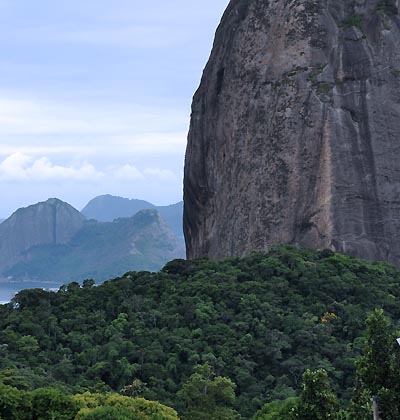 This is a small slice of the granite peak named Sugarloaf Mountain. Note the almost vertical wall of stone. 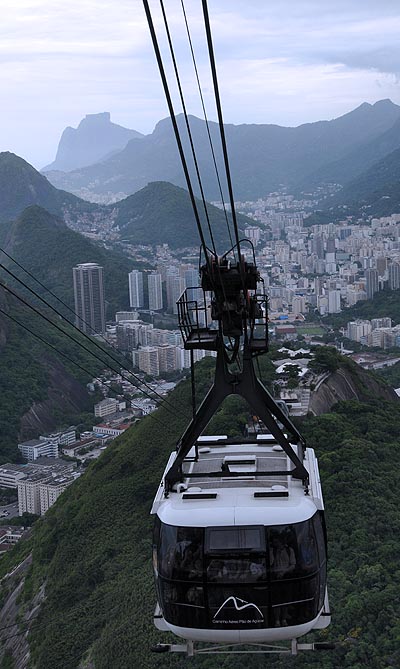 This is one of the cable cars that makes the trip every 15 minutes to the top of Sugarloaf Mountain. The system was engineered by the Swiss, and thankfully, it was not built by Walmart's major supplier. The view from the top (in all directions) is simply stunning and a photograph can't possibly due it justice. 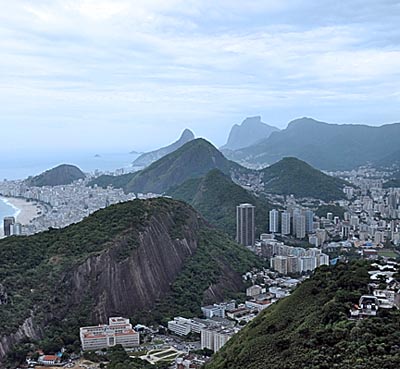 This is a similar view but from a wider angle. Center left is Copacabana Beach, and beyond the small (green) mountain centered left is Ipanema Beach and the land of string bikinis and surfer dudes. 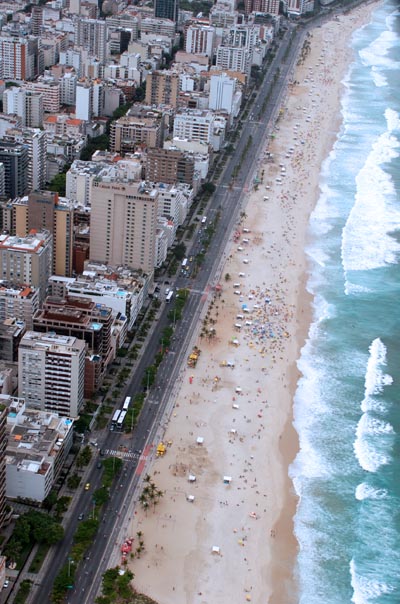 From a helicopter, this is a Sunday late-morning view of Rio's Leblon Beach. To the northeast (out of view) is Copacabana Beach. 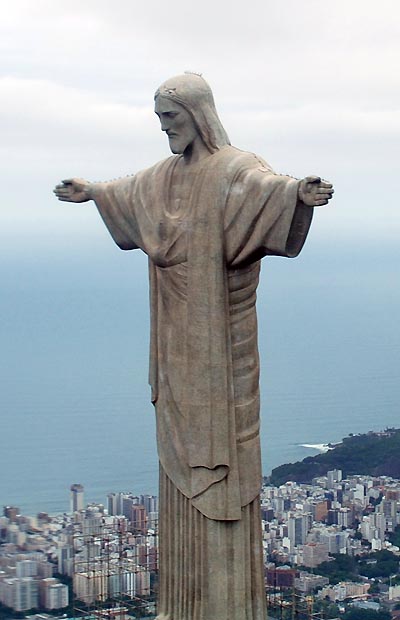 The Christ the Redeemer statue that stands atop the 2,296 ft. high Corcovado Mountain in Rio de Janeiro was recently named one of the New Seven Wonders of the World. Designed by Heitor da Silva Costa (a local engineer), and sculpted by Paul Landowski (a French monument sculptor), it is the recognized symbol of Rio de Janeiro. 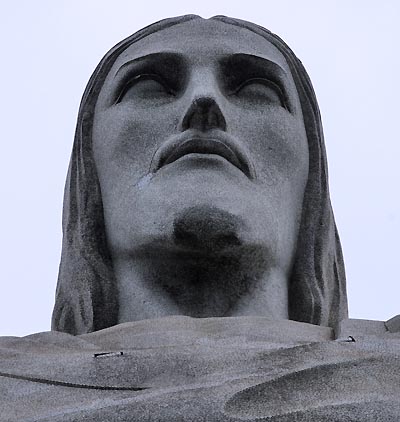 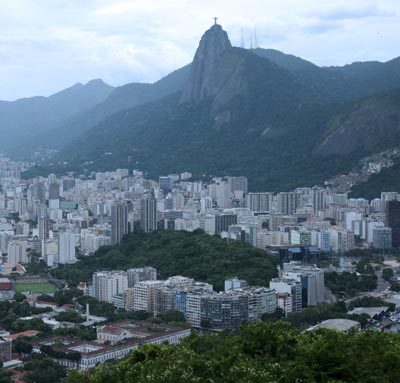 This long distance shot will give you some idea on how Christ the Redeemer dominates the skyline of Rio. Note the cross on the granite peak in the background. It is literally visible from almost anywhere in the city. 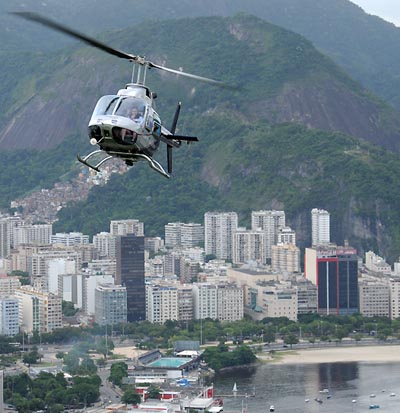 For the best views of the entire city of Rio, one must take a helicopter ride. 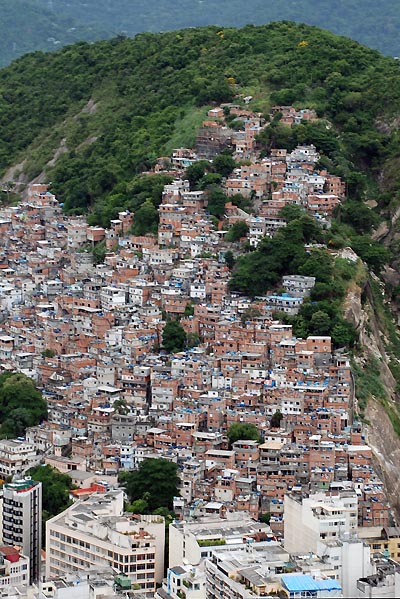 In Rio de Janeiro, the rich mix with the poor on the beaches, at soccer matches, and on the mountain side. There are no private beaches in Rio, and shantytowns seem to tumble down granite hillsides to blend into the beachfront condos and hotels.