Lima, the capital of Peru, once the richest city in the Spanish colonies, remains a living museum of Spanish architecture and history. 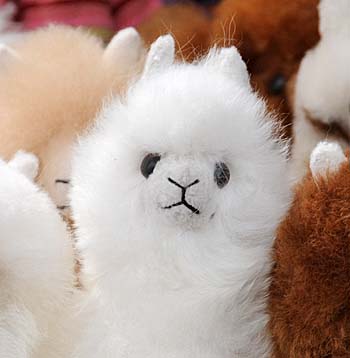 The llama is one of the symbols of Peru. 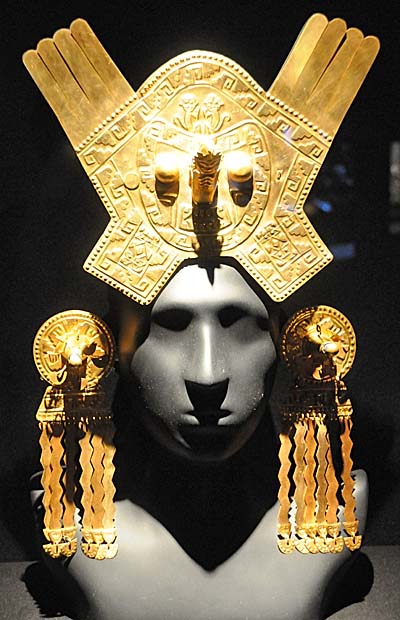 In ancient Peru, women were women and men wore earrings. And they were big earrings at that! This Inca jewelry was on display at the amazing Larco Archaeological Museum in Lima 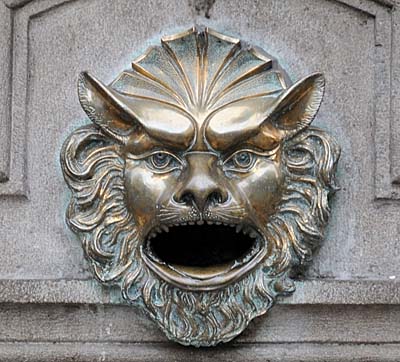 This was once the central mailbox slot for all of Lima. Today it graces the side of a building used by the government near the Presidential Palace. 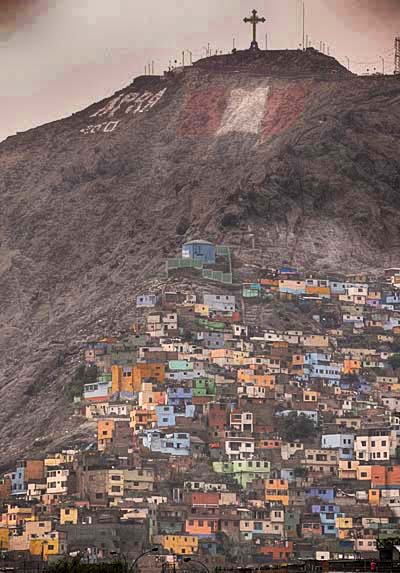 It was a very hazy day in central Lima, but the famous barrio houses that cover local hillsides were clearly visible. Lima government officials contract with a local company to paint the houses and it's a full time job. 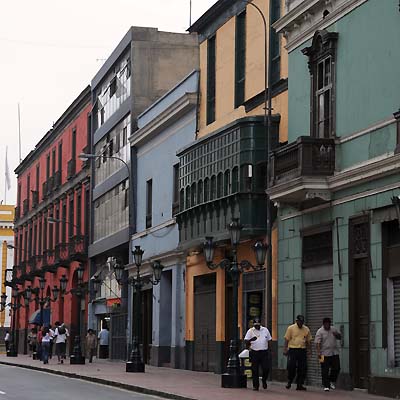 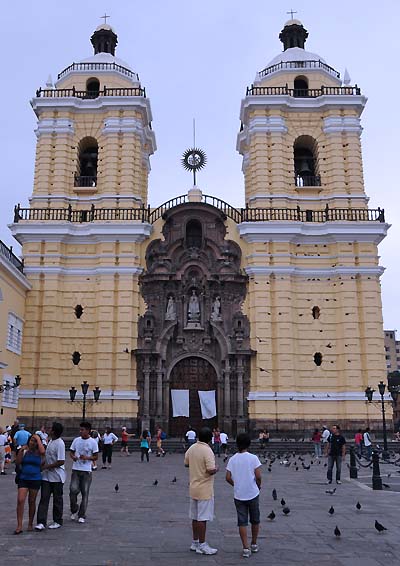 The beautiful and well preserved church of San Francisco of Asis in Lima's city center reminded me so much of Venice, Italy. 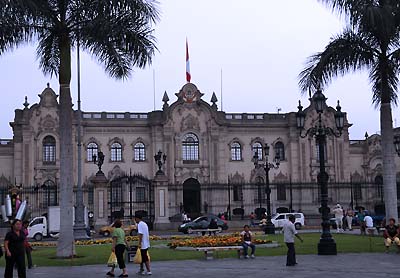 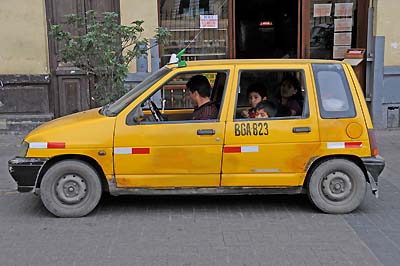 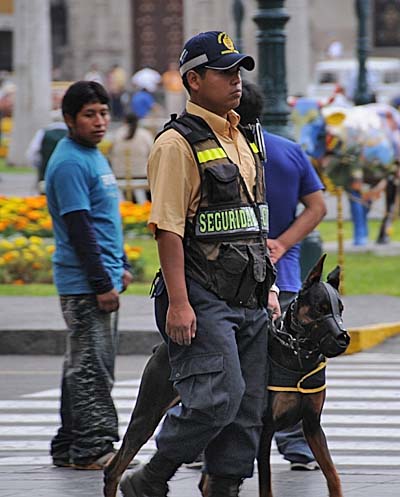 Police were everywhere in Lima. In Plaza San Martin, site of the Presidential Palace and other important buildings, this was especially true. Police dogs in the Plaza were muzzled but they still looked fierce to me. 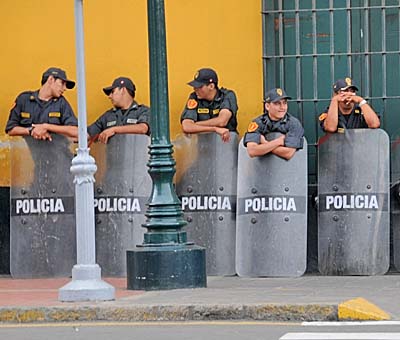 And speaking of law enforcement, these young dudes (riot police, I guess) were apparently waiting for the next riot in Plaza San Martin 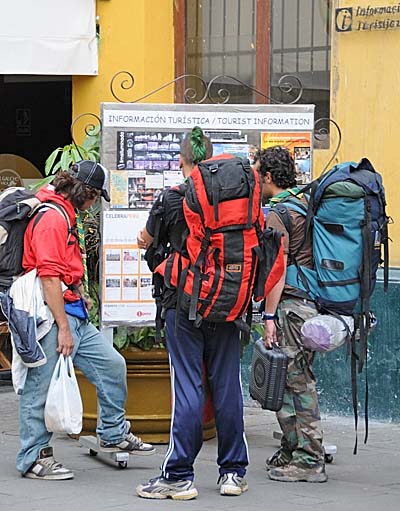 In South America backpackers are a common site. This trio from the Netherlands was trying to make alternate plans after Cusco and Machu Picchu were closed because of heavy rain and mud slides. 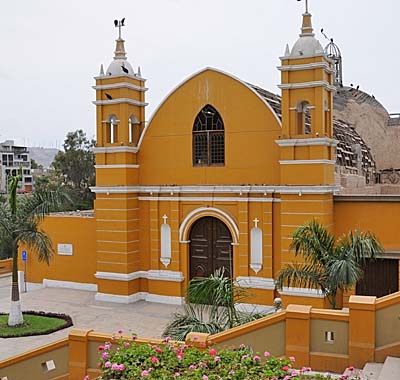 Within the Lima metro this quaint little church sits in the Puente de los Suspiros (Bridge of Sighs) area of the city of Barranco. If you look carefully at the photo you will notice that only the front of the building is finished and those are vultures perched on the roof. Might be an omen. 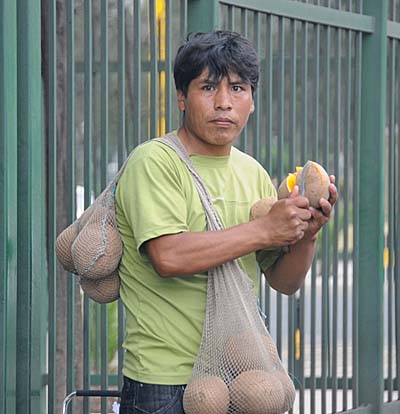 With no underground and no trains, traffic jams are endemic in Lima. There's an estimated one million automobiles and 250,000 buses in the city, so clogged streets are common. Subsequently Lima, with a metro of nearly seven million is a street vendor's paradise. This guy was selling slices of melon to weary drivers and doing a brisk business. 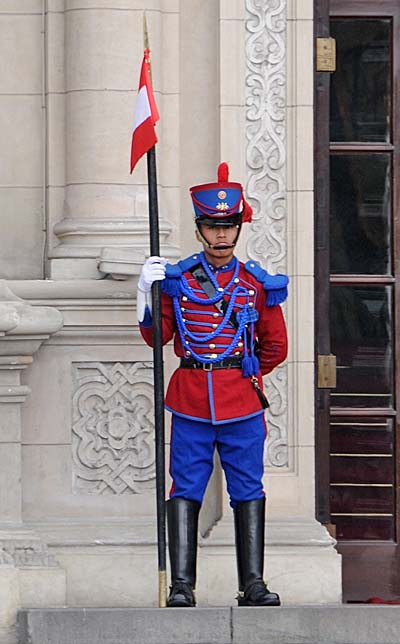 A sharply-dressed guard (with an attitude) at Peru's Presidential Palace. 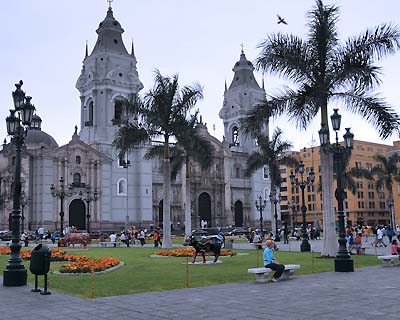