Located in far northern Chile near the border with Peru, Arica is the gateway to the Atacama Desert, the driest place on Earth.

Bolivia, with no direct access to the sea, and businesses in southern Peru use the Port of Arica for both imports and exports. 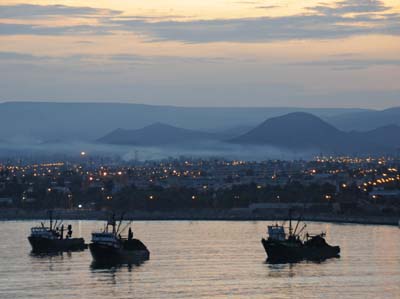 This is an early morning view of the city. 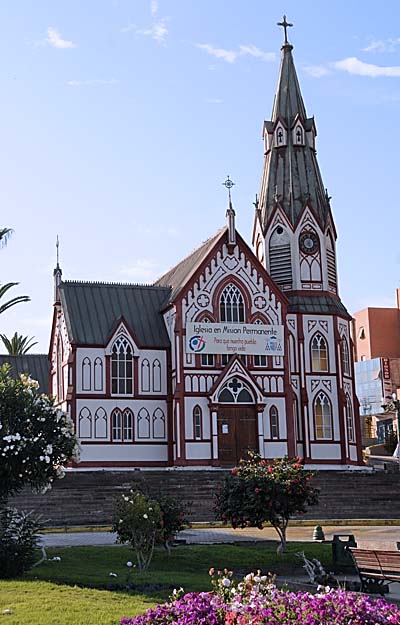 This is the Iglesia San Marco de Arica Cathedral. Designed by Alexandre Gustave Eiffel and built almost completely of iron, in Paris, France it was subsequently shipped to South America. It was in fact generously moved to Arica from its first location in Ilo, Peru. That move was motivated by a giant tidal wave that destroyed much of Arica's churches. To me, it looks ever-so-much like a large gingerbread church. 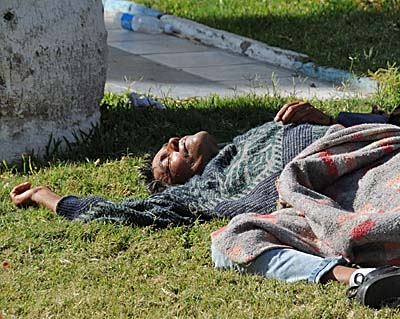 In the courtyard of the Cathedral I found this man sleeping on the grass. It was sunny with the temperature in the low 80s and I was plenty warm, and yet, this guy wore a heavy sweater and was covered by a heavy blanket. About one hour later in the very hot sun he remained in nearly the same position. My guess is this (for him) was the morning after the night before. 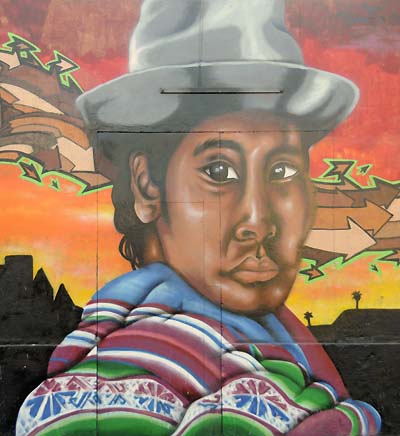 In the heart of the city, colorful street art on buildings was a common site. 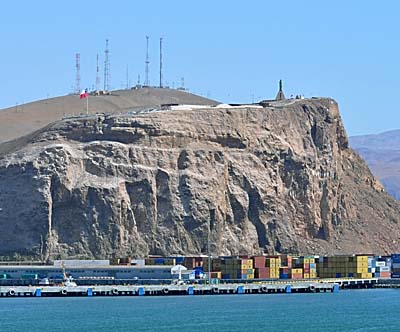 This is the highest hill in the city limits and a taxi driver will charge you $10 for the short trip to the top, but only $5 for the return. I guess for another $10 people would decide to walk back down, so they offer a discount of sorts. 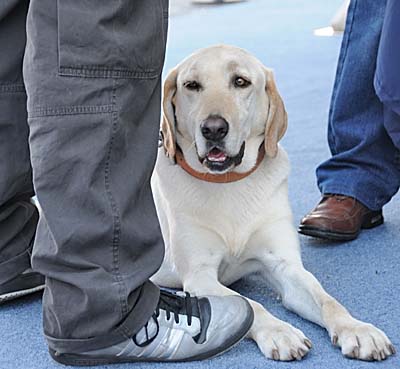 Upon returning to the MS Prinsendam, all passengers were directed to walk through a secure area controlled by Chilean authorities. They were searching (according to my sources) for illegal substances, smuggled ancient artifacts, as well as certain fruits and vegetables. Their top-notch inspector was this dog named Lauca. I watched him for nearly 10 minutes and this was his position the entire time. I could've walked on the ship with who knows what and this sedated pooch wouldn't have moved a muscle (I think). 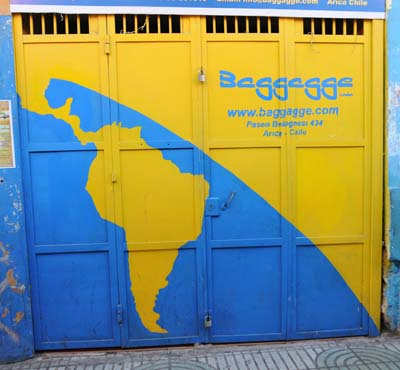 I show this photo because it accents a fact that some travelers are unaware of. Many travelers, in-the-know, ship their bags right to their end destination, and don't bother with the airport hassle. Many companies offer this service, both domestic and foreign. It's a bit pricey, but they pick the bags up at your home (or office) and there they are, waiting for you at your hotel when you arrive as your destination. It's a nifty way to travel. 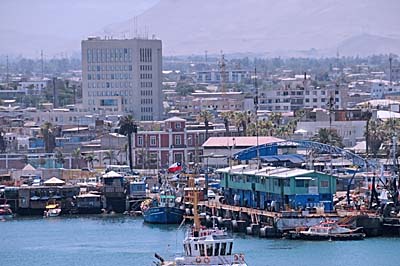 This is a mid-afternoon view of Arica's waterfront. Note the foothills of the Andes in the background. 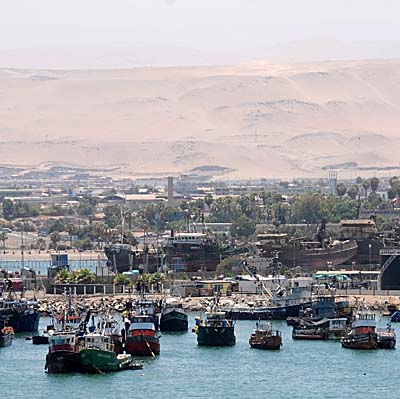 Behind the town of Arica, the Andes high desert dominates the landscape. 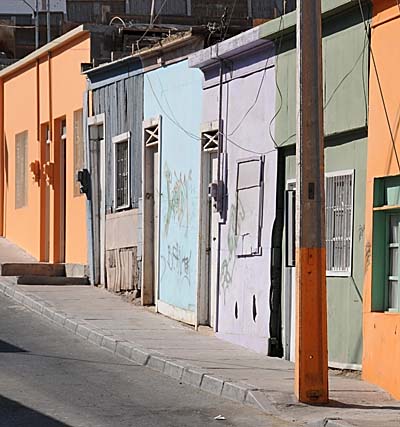 Looking up or down most any of the hilly city street, the buildings were all similar in size, and earth tones were the colors of the day. 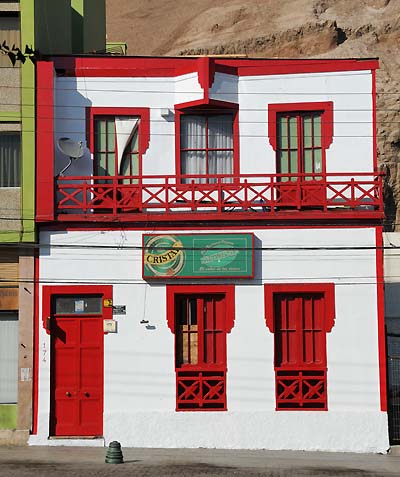 There are exceptions to every rule as this pub chose bright red. 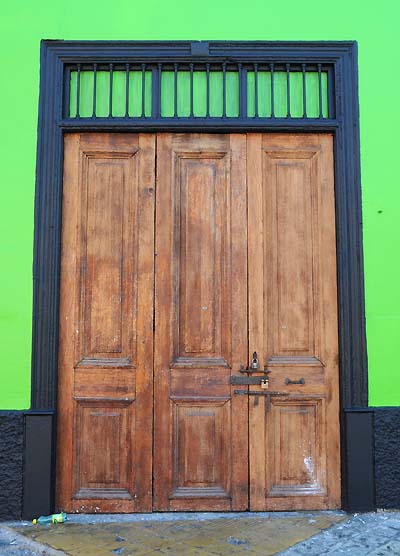 A bright green accented this wooden door, and this look was all but the norm. 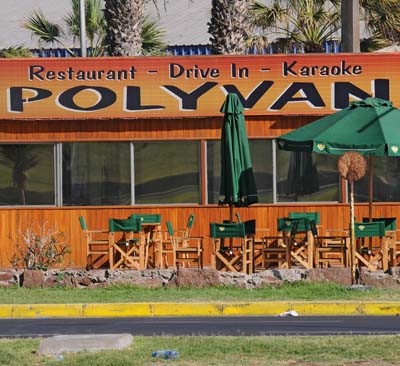 As far as I could tell this was a fast food restaurant. Can you imagine McDonald's with Karaoke singers? 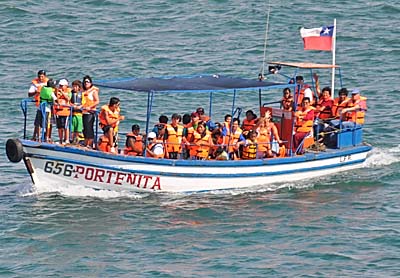 In every port we've visited to date the locals come out to pay a visit; they cruise around the ship, taking pictures and waving to the passengers. Looks to me like this boat passed the life jacket drill with flying colors.