This amazing dragon is a carnivore and lives mostly on the deer and wild pigs that inhabit the island. They are good swimmers, and quite agile and swift on dry land.

You can't view these creatures unless on a guided tour, accompanied by rangers. The Komodo Dragon can smell blood from many miles away, so visitors are not allowed to bring any food onto the island. And believe it or not, women during their menstrual cycle are discouraged to take the tour. 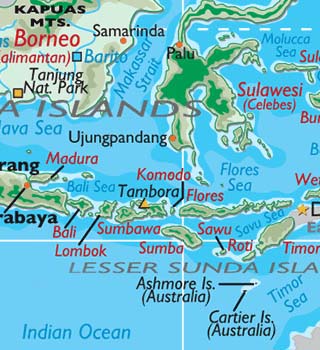 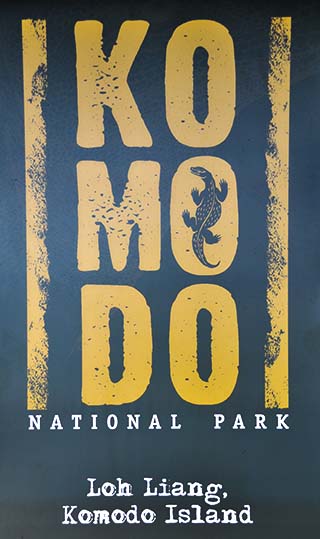 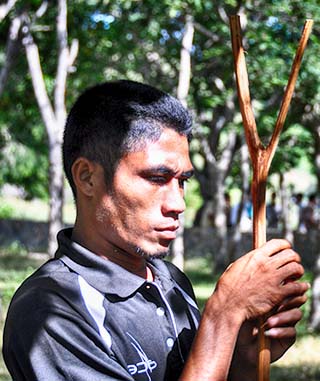 By Indonesian law the local guides can only carry forked sticks for their defense. Really!

The narrow path through the jungle of Komodo Island, and the question is, where are the dragons? 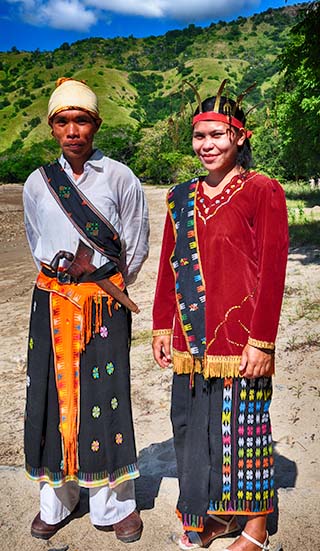 Two of the friendly local villagers, complete with native dress. 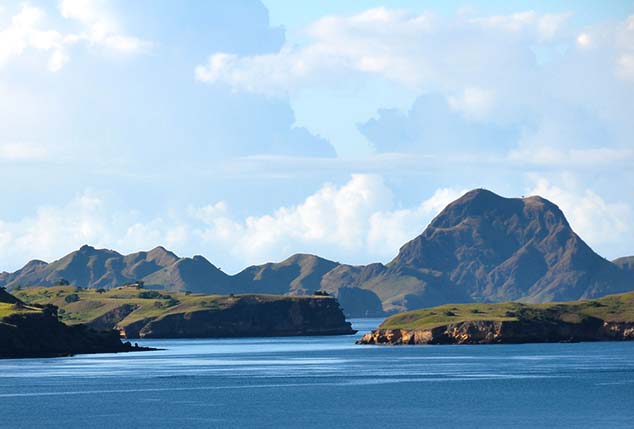 I shot this long-distance photo of Indonesia's Komodo Island from the deck of Holland America's ms Volendam. I would soon go ashore to see the legendary Komodo dragons up close and personal, and I must admit that I was a bit nervous. 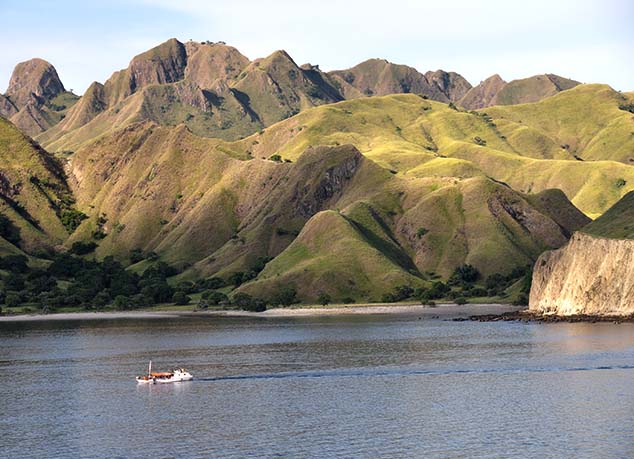 The local topography was stunning and I had my binoculars trained on the hills hoping to spot a dragon; no such luck. 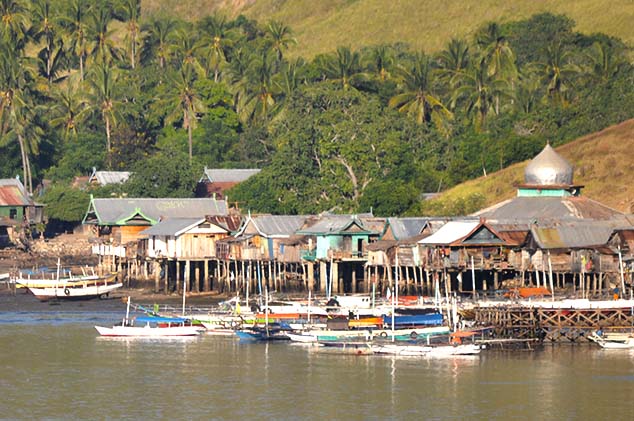 Komodo National Park is home to about 3,500 people who live in four villages. The largest settlement is Komodo Village (shown). Most of the people in Komodo National Park make their living out of fishing. Some earn extra income by carving wooden Komodo dragons to sell to visitors. Four locals have been killed by Komodo dragons in the last 35 years 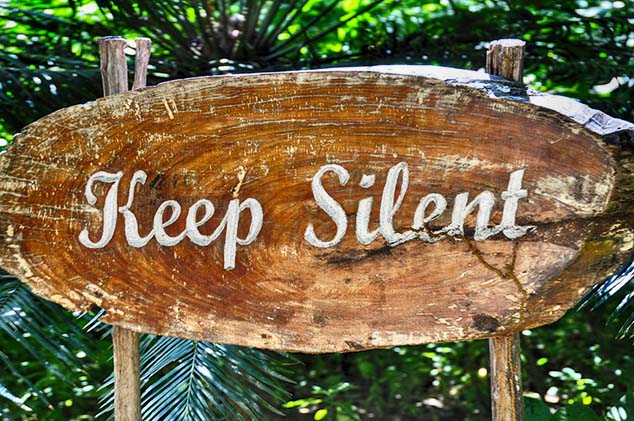 As we were about to start the tour, the group was reminded by our guides to keep as quiet as possible, as dragons have very good hearing. I didn't say a word as Komodo dragons have a fearsome reputation because of their shark-like teeth and poisonous saliva that can kill a person within days of a bite. In addition, they have no fear and are quite fast. 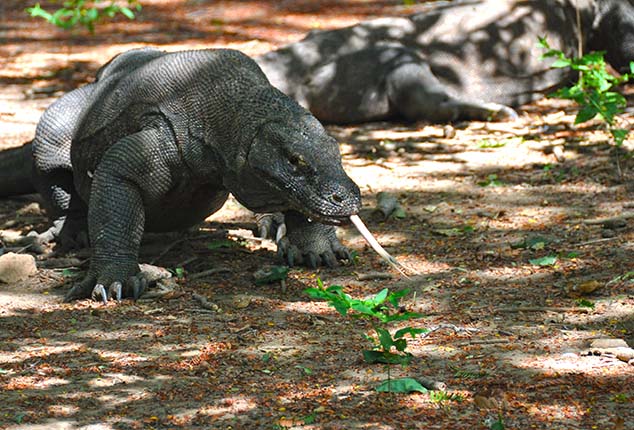 And there they were in the middle of a clearing in the jungle. They may appear docile and slow when lounging on the ground, but they are quick, strong and deadly. In fact, they can reach speeds of up to 18 miles (nearly 30 kilometers) per hour, their legs winding around their low, square shoulders like egg beaters. Frankly, I literally froze in my tracks. 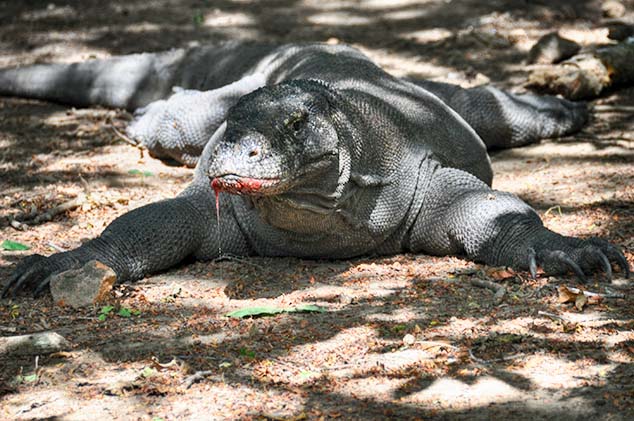 According to one of our guides, this 300 pound male had just eaten a goat. We had numerous guides armed with long forked sticks (no guns), but nevertheless this guy was only 15 feet away and it was a somewhat daunting experience. 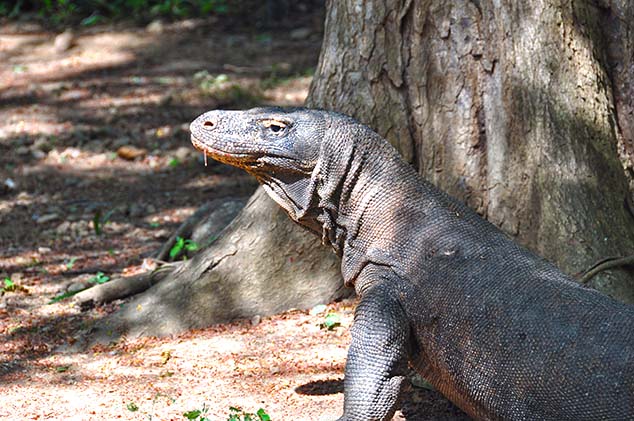 This is a profile of a female. The guide estimated her weight at nearly 200 pounds. Her long, jaded teeth are her primary weapons. They deliver deep wounds and the bit venom keeps bleeding and further lowers a victim's blood pressure. 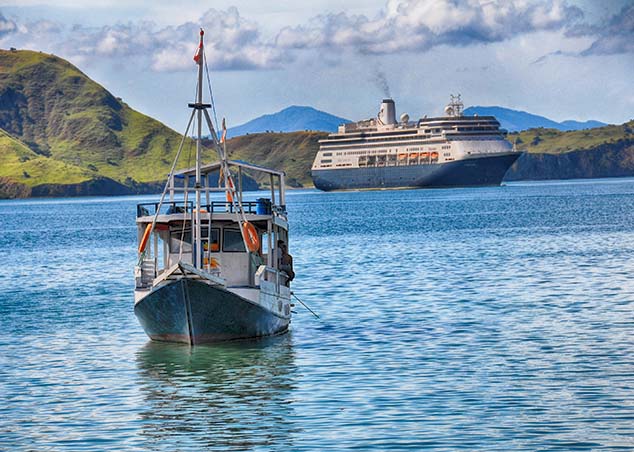 I was happy to return to the ship after a tense 5-hour visit to Komodo Island, but if given the chance, I would go again.