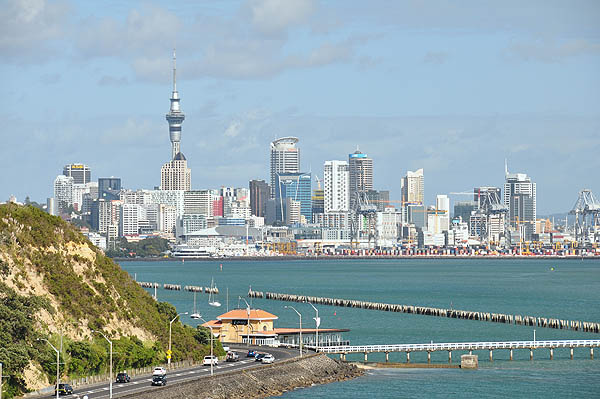 From a vantage point just south of the city, this is a view of Auckland's central business district. As you can see, Auckland's most striking feature is the "Sky Tower," the tallest structure in the southern hemisphere. The 1,076 foot tower (taller than the Eiffel Tower in Paris) offers a 360 degree observation deck, and contains a revolving restaurant and assorted souvenir shops.

But it's most daring attraction is the SkyJump where crazy people can take the "Fan Descender Jump." All strapped in and standing on the edge of the observation deck, a crazy person then jumps off that edge. During the 980 foot decent a crazy person reaches speeds over 50 mph. The jump is guide-cable-controlled to prevent that crazy person from colliding with the tower in case of gusts. Nevertheless, from the top of the tower, when you watch one of those crazy people make that jump they are really moving fast, straight down to the ground below.

Our crazy person tour guide made that jump. Picture Here!

Now I would've made that same jump but I was saving my energy for viewing the world's largest, all-leather shoe. You may think that looking at a shoe takes no energy, but I beg to differ. My wife was with me and if she as much as walks into a shoe store, well, I've got bags to carry, and frequently more than one, and this time was no exception.