In a rapidly changing world, the ancient art of Dokra, a beautiful technique practiced across India, faces many challenges.

The tiny village of Sadeibareni in the Dhenkanal district of Orissa is home to about forty families of artisans who practice a craft culture that has survived for more than 4,000 years in India. Known as dokra, it is a traditional metal casting artwork using the “lost-wax” technique. One of the earliest examples of this craft form is the “Dancing Girl” artefact discovered in the archeological ruins of Mohenjo-Daro. Today, in the age of globalization, the dokra artisans of India are battling great challenges to keep alive the rich tradition of their ancestors

As we entered the village of Sadeibareni, one of the artisans, Mr. Behera, a middle-aged man, clad in a lungi (a type of sarong worn around the waist) and a gamucha (a coarse cotton towel) thrown over his chest, invited us to his workshop to enrich us with the knowledge of how dokra is crafted. His modest workshop is an open space with a tarpaulin-guarded roof supported by bamboo poles, a mud floor, and a handcrafted wooden table. The workshop is an extension of a tiny mud hut bereft of any material comforts, where he resides with his family, and an open kitchen where lunch was cooking on a clay stove. Each house in the village is built on a similar design. The entire village is like an open-air gallery of dokra.

An Art Form Passed Down Through Generations

The village of Sadeibareni is not the only one of its kind. The dokra artisans of India exist as small, scattered tribal communities living in different parts of the country, with a higher population in Eastern and Central India.

“Our tradition is our means of livelihood” Mr. Behera informed World Atlas. “I have learned it from my father and have gifted the knowledge to my sons.”

“Crafting dokra is not easy,” he says. “It is both time-consuming and laborious in nature.”

Indeed, the steps required in obtaining a finished dokra product involve painstaking work. The primitive tools and technology used by these artisans further heighten the difficulty of the process.


Solid and hollow lost wax casting are the two methods used by Dokra artisans in crafting the artefacts. While the former is more popular in Southern India, the latter is favored by the Dokra artisans of Eastern and Central India.

A clay core roughly resembling the intended product is first shaped by the artisan. It is then left to dry in the sun. Next, the clay core is coated with a layer of beeswax that is modeled to include all the finer details and designs that is desired in the finished product. Finally, another layer of clay is coated over the wax. The designs carved into the wax coat now get imprinted on the inner surface of the topmost layer of clay. The mould is then dried and heated in a kiln to melt the wax which drains out of the ducts in the mould. The molten metal, usually brass scrap, is now poured in through the ducts to replace the wax. The metal solidifies between the inner core and the outer clay layer and takes up the same shape as the drained wax. Once the metal solidifies, the upper clay layer is chipped off revealing a beautiful dokra artefact with enchanting folk motifs and a forceful form. 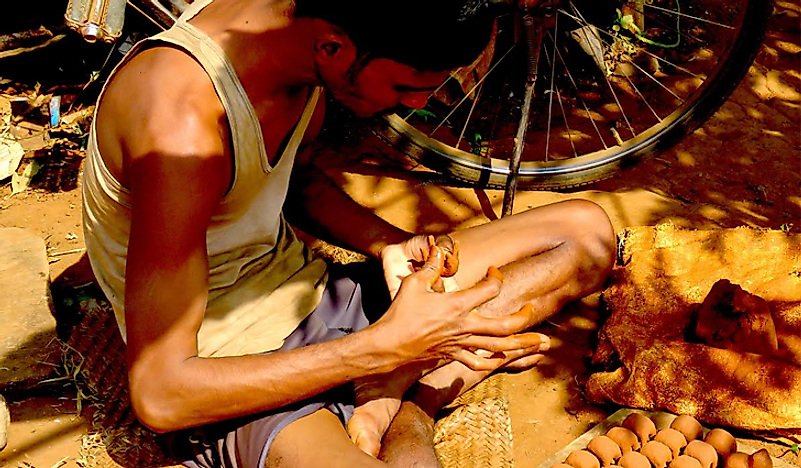 An artisan applies the topmost coat of clay over the wax layer of Dokra. Photo Credit: Arijit Nag. 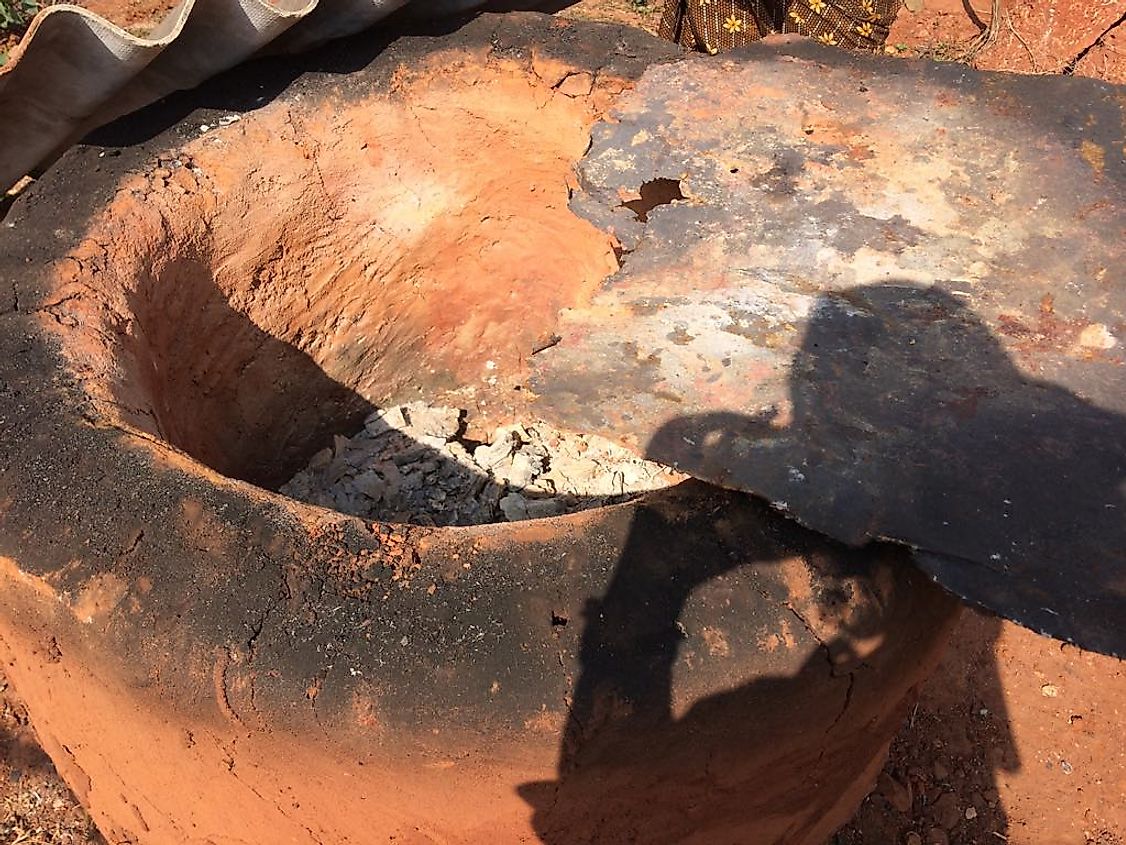 Despite Worldwide Appreciation, Artists Have Not Seen Profit

Dokra art is widely appreciated the world over. Dokra products like horses, elephants, lions, owls, Hindu deities, tribal dolls, tribal jewelry, lamps, and more are all in great demand in both domestic and international markets. The popularity of e-commerce sites has also heightened the sale of Dokra products online.

However, despite the growing demand for products, most Dokra artisans live in great poverty. Some of the artisans are so poor that they cannot even afford a single square meal a day.

To know more about the plight of these Dokra artisans, World Atlas interviewed Dr. Subhrajit Chatterjee, Assistant Professor and Head of the Department of Sociology, Kashipur Michael Madhusudan Mahavidyalaya, West Bengal India. Dr. Chatterjee has carried out extensive research on the Dokra artisans of West Bengal and has in-depth knowledge about the socio-economic issues associated with these populations. Dr. Chatterjee had the following to say:

“Globalization has induced an expansion of the global market for Dokra products. But the problem is that the artisans are unable to reap the benefits of the positive market trends. It is the middlemen who receive the maximum benefits by purchasing the craft at a very low price from the craftsmen and selling them at skyrocketing prices in the global market. The illiterate artists, failing to deal with the complex modern market system independently, are forced to seek the assistance of these middlemen who pocket the actual surplus. Thus, with rising costs of raw materials, the artisans gradually become poorer compelling some of them to adopt an alternate profession.”

He also speaks of another burning issue creating havoc in the lives of these poor craftsmen.

“Dokra crafts, which are produced with traditional skill, are under threat of steep decline because of competition from the cheaper, machine-made local substitutes and imports, which exhibit greater uniformity and better finish.”

“During the past few years, a group of businessmen [who do not belong to the Dokra community] have set up factories where similar kind of products are produced and get traded in various markets within and outside India. This actually creates competition for the real artisans who, with their primitive tools and techniques, are unable to compete with the factory-made products.”

The Dokra artisans of India, although proud of their rich tradition, thus suffer greatly. The elementary infrastructure available to these dokra artisans is a major deterrent to their economic well-being.

“We cannot craft Dokra for four months in the year when the monsoon sets in since we do not have “weather-proof” workshops”, says Mr. Behera. “During this time, we try to find alternative work but that is not easy”, he says.

It is not difficult to understand that for these poor artisans, four months of idleness translates to great economic loss and agony.

The traditional crude furnace used by the artesans is not only fuel inefficient but also damages the products if they are not removed in time due to the absence of a temperature control mechanism.

Mr. Behera shows us an artifact which has been damaged due to overheating. “Look at this”, he says, “It took me long hours to model the wax and create this figurine. However, a small miscalculation of time ruined it all,” he informed, referring to the damaged metal in parts of the otherwise perfect figurine. Wax coated moulds lie beside a finished Dokra of an elephant head that has been damaged due to overheating. Photo credit: Arijit Nag.

In addition to the challenges provided by tools, illiteracy is widespread in this artisan community which acts as a serious handicap to the economic development of the Dokra craftspeople of India. The lack of the ability to read and write makes many of them suffer heavy losses in the trade. It also leads to a lower exposure to the global market and demand patterns.

“Our children go to school”, says Mr. Behera. “However, we are poor people. Many of our children fail in their classes and school and college dropouts are common. We lack the economic resources to sustain the education of our children.” Although he sports a smile on his face, the sad undertone in his voice is difficult to miss.

What Can Be Done to Help Improve the Vitality of the Dokra Artisans?

Dr. Chatterjee suggests a few potential solutions to ensure a better life for these talented artisans of India:

1. Due to the paucity of funds, the dokra artisans lack the resources to advertise their work. The government can play a vital role in solving the marketing problems faced by the artisans.

2. The age-old reliance of the poor artisans on middlemen and money lenders for getting the raw materials and selling the finished products should be diminished, if not eliminated.

4. Designs can be patented so that no one can copy it.

5. A common complaint is that the price of the dokra products is non-uniform. In this situation, the customer feels exploited and harassed. This might have a bad effect on the demand for the product. So, categorization of art in each craft should be done according to the skill exhibited and quality of raw materials used. The pricing should be determined accordingly by a team of experts.

6. Care should also be taken to popularize the craft in home markets creating awareness among the home consumers.

7. A sustained and long drawn-out initiative/counseling on alcohol de-addiction should be done.

Not all is bad news for India's Dokra craftsmen. Some measures have already been adopted by the government and welfare organizations of the country to encourage the artisans. Free-of-cost workshops have been arranged to train these artisans in the latest techniques of the art and modern designs. Non-governmental organizations are also working with these dokra artists to ensure their talent gets fully appreciated and their rights are recognized.

In the end, it is hoped that all efforts to solve the problems of India's Dokra craftsmen will bear fruit and that the age-old Dokra art will survive and thrive for centuries to come.