For the Nubian people of Egypt, the Nile River is synonymous with life itself. What does life look like after relocation?

As we stepped out of the ferry, the sight of the vibrant Nubian village of Gharb Sohail and its bustling marketplace greeted our eyes. The village of about 3,000 residents is located a short distance away from the Upper Egyptian city of Aswan. Gharb Sohail offers tourists a rare glimpse into the Nubian culture and way of life, treasures that the villagers are struggling to protect despite the odds.

Gharb Sohail is one of the few last remaining strongholds of the Nubians, an ethnolinguistic group whose history predates that of dynastic Egypt. Nubians trace their origins to the early inhabitants of the central Nile valley, the seat of ancient knowledge and one of the world’s earliest cradles of civilization. In the past, ancient Nubia, as the homeland of the Nubians was called, followed the Nile from what is now southern Egypt to northern Sudan. Very little of ancient Nubia remains today. Following the independence of Sudan from Egypt in 1956, political borders split the Nubian community between the two countries. 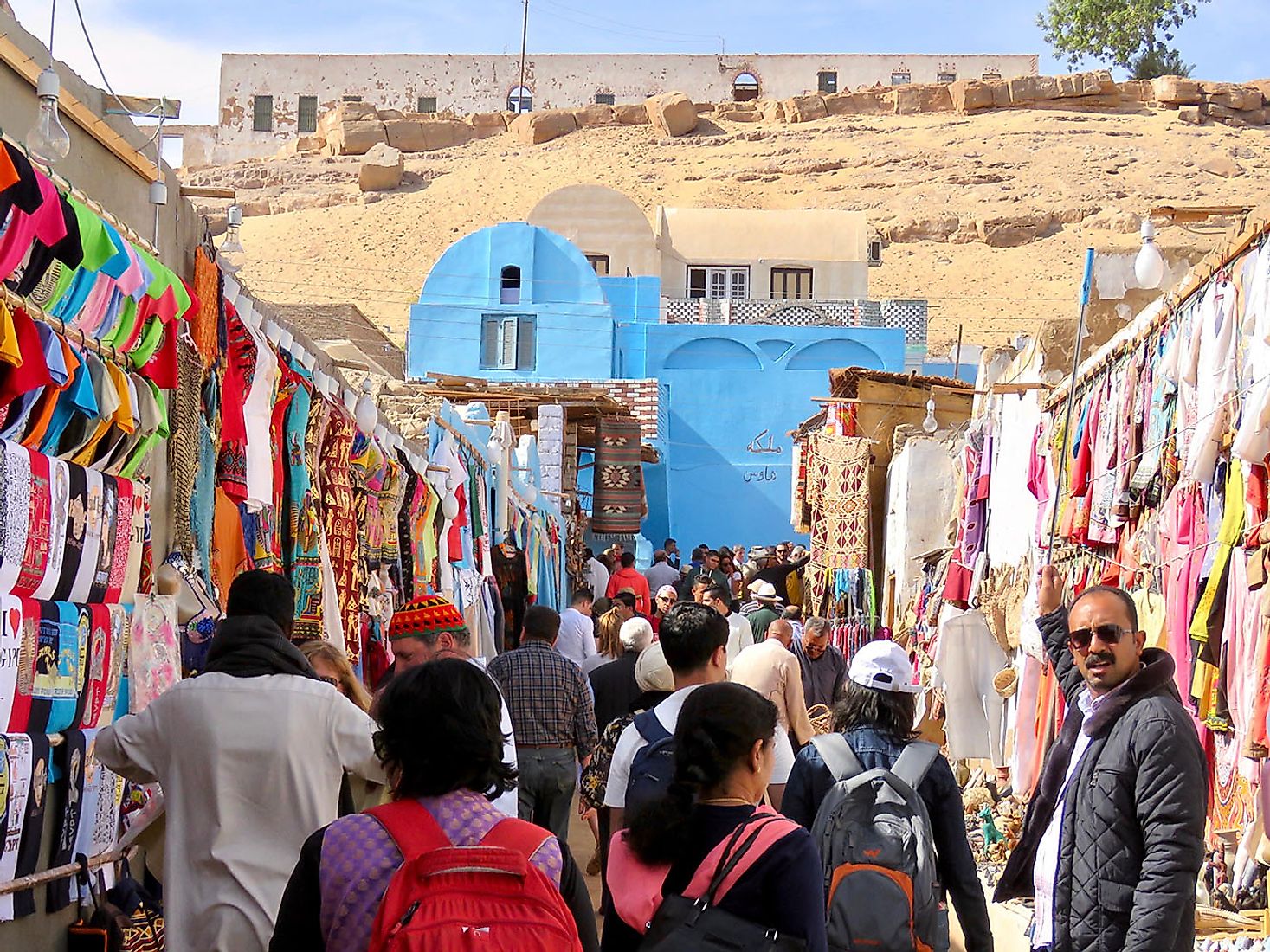 As we passed through the narrow tourist market of the village filled with accessories, handicrafts, incense, perfumes, and colorful spices, our local guide explained to us how strongly tourism drives the economy of the village – and how a dip in tourism could spell disaster for the local population.


This reliance on tourism has not always been the case. Originally hunters and herdsmen, Nubians eventually became farmers and fishermen. Ancient Nubians of Egypt enjoyed the ownership of large stretches of irrigated land along the Nile River in the southern parts of the present-day country. The agricultural economy of ancient Nubia had been established by as early as 6000 BCE. Trade also played a vital role in Nubia’s economy as exotic goods like ivory and animal skins from sub-Saharan Africa passed through Nubia to Egypt and the Mediterranean. Nubian kings also controlled gold mines in the region. The Nubians, famed for their warrior skills, managed to hold on to their land for thousands of years despite repeated invasions by foreign powers. Nubian kings ruled large empires that for a period of 75 years included all of Egypt. The Nile as the Nubian Lifeline

As we sat down in a traditional bench built into the wall of a big hall of a Nubian house, the Nubian home-owner welcomed us with a shy smile. Nubian houses are mud-walled or stone structures centered on a courtyard with an extensive layout of men’s and women’s quarters surrounding it. The houses are brightly colored and have walls decorated with scenes from everyday life, geometric and figurative images, wall-mounted objects, dried crocodiles, or the evil eye to ward away bad luck.

Sipping on hibiscus tea, one of the traditional drinks served here, we learned more about the absorbing history of these people.

“The Nile was the lifeline of the Nubians for centuries,” our guide informed us. “However, much of the homeland of these people is now under Lake Nasser.” It was dams that caused the flooding. The controversial building of a series of dams on the Nile in the 20th century was accompanied by a series of pros and cons. While the dams facilitated the generation of hydroelectric power to serve the needs of Egyptians and protected parts of Lower Egypt from seasonal flooding, it also swamped large parts of Nubia and threatened architectural monuments and complexes by flooding. Both the people and the historical sites suffered the same fate.


Both had to be relocated.

Today, most Nubians living in Egypt dwell in the fringes of the Egyptian society. For more than a century, thousands have been forced to leave their ancestral lands along the river for the construction of dams and reservoirs. The latest displacement of Nubian people occurred in the 1960s when the building of the Aswan High Dam and the creation of the massive Lake Nasser compelled over 50,000 Nubians to leave home and relocate to new areas far away from their lifeline of the Nile river. While some resigned to their fate and accepted their new homes in the deserted landscape about 25 km away from the Nile, others like the Nubian residents of Gharb Sohail refused to leave the river and sought refuge on some islands on the river near Aswan. Also, there have been others who have moved to the big cities like Cairo and Alexandria in northern Egypt in search of better living standards. A new generation of Nubians is also following this trend. However, for these people whose dark skin distinguishes them from many Egyptians, facing racial discrimination is nothing new in the urban jungles of northern Egypt. Few who were raised in these cities speak their traditional language. While most uprooted Nubian communities have lost touch with their heritage, the nearness to the Nile has made it possible for the residents of Gharb Sohail and some other nearby Nubian settlements to cling on to their precious culture despite the dramatic changes their communities experienced in the past decades. These villages thus provide an opportunity for tourists from across the world to see and experience the rich heritage and culture of the Nubians.

“Most of our men here work in tourism and winter is a busy time for us”, Mourad, our young Nubian host whose ancestors were accustomed to cultivating crops on the fertile banks of the Nile, informed us.

While villagers like Mourad consider themselves fortunate to be connected to the Nile, the Nubians who were shifted to “resettlement" communities far away from the Nile bear the brunt of the sorrow of displacement. They often complain about the shoddy construction of their new homes and about the fact that their lifeline, the river, is miles away. For many, holding on to their culture and customs, which are heavily influenced by the Nile, becomes a mammoth task.

There are several unique aspects of the Nubian culture that sets it apart from the Egyptian mainstream. A matrilineal tradition where the property is passed down through the maternal side of the family is practiced by these people. Although Nubians practice Islam, their religious practices are also influenced to a certain degree by traditional folk beliefs. Many drink alcohol. They also have their own set of languages that belong to the Nilo-Saharan language phylum.

Many Nubians feel that returning to their land by the river before it is too late is the only way to check the decay of the Nubian culture. Nubian activists are thus persistently fighting for the recognition of their rights.


The Egyptian Revolution of 2011 gave a new momentum to the young Nubian activists who are demanding that the Nubians be granted the right to return to the area around their ancestral lands. For many Nubians, living away from the Nile is like not living at all.

Post-revolution times gave new hope to the Nubians of Egypt when in 2014, the newly-written constitution of the nation recognized the Nubian homeland and established the goal of developing it in a decade. The article 236 of the new constitution sets out a Nubian right of return.

Although this was a turning point in the recent history of Egypt’s Nubians, little action has been taken in this regard.

Thanking our host for the tour of his beautiful home, we once more set out through the marketplace towards the jetty to catch our boat back to Aswan. On the way, we marveled at the craftsmanship of these people as the intricately carved jewelry and attractive handicraft items lured the buyer in us to venture into the colorful streetside shops.

“We loved the place”, Neelam, a tourist from India said. “The Nubian culture is unique indeed and full of surprises. It must be conserved well.”

As our ferry left Gharb Sohail, we too hoped that the Nubian culture would survive the test of times and continue to enthrall the world for the years to come.