Remember elementary science teaching you about the food chain? Have you heard of how the changing world is threatening the normalcy of our food chain? But how do we tell? How do we quantify the healthy numbers in which organisms across all trophic levels should exist? That is when scientists, biologists and ecologists developed the idea of ecological pyramids. There are three ecological pyramids: the pyramid of numbers, the pyramid of biomass, and the pyramid of energy. Each of these pyramids help identify, quantify and deduce the nature of production and consumption of energy on the planet across different levels.

What is an Ecological Pyramid? 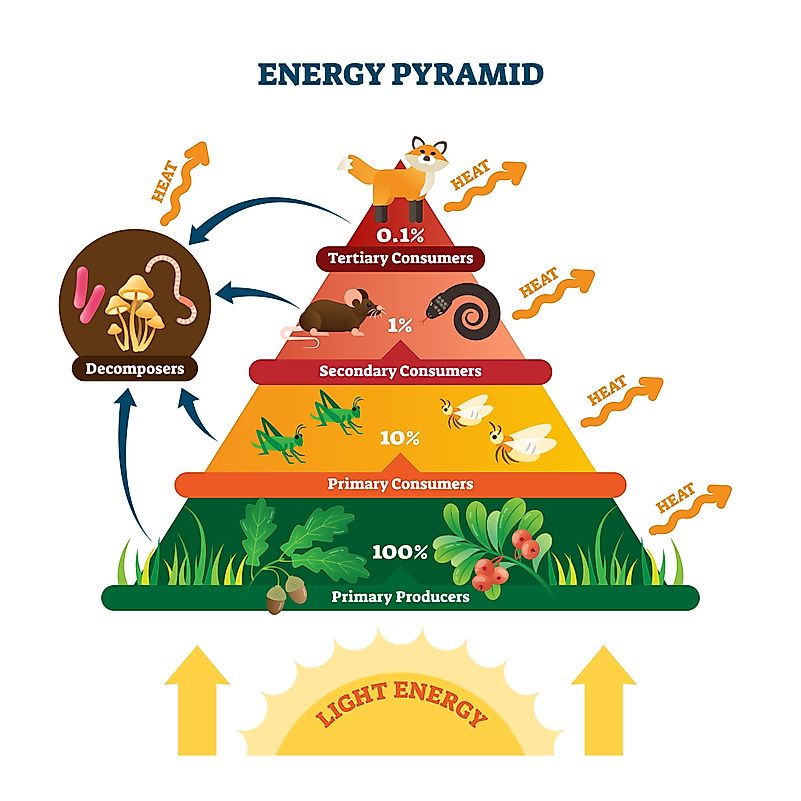 The process of determination is through the collection of organisms occupying each trophic level separately and measuring the dry weight. This process helps with actually weighing each organism, thus resolving the size difference issue. The measurement of standing crop occurs, which is simply measuring the mass of living material in each trophic level per unit area. It follows a hierarchy of producers to consumers and is usually noticed to be sloping.

Land based pyramid biomass reflects a larger base of primary producers with a small trophic level on top. This is an upright pyramid. On the contrary, an inverted biomass pyramid occurs in aquatic ecosystems, where the consumer biomass exceeds the producer biomass, any day. One notes that the large number of zooplanktons depends on the relatively smaller number of phytoplanktons. For example, in an aquatic ecosystem, the consumer carnivore biomass is much more than the producer phytoplanktons at the bottom of this inverted pyramid. Whereas, on land, the carnivore biomass is lesser than the producer biomass. There are also number pyramids and pyramid energy which value the number of organisms and the energy transfer from level to level, respectively. The typical units for the pyramid biomass is grams per square meter or calories per square meter.

While Charles Elton is credited for the pyramid of numbers, it’s Friedrich Simon Bodenheimer who expressed the pyramid in terms of biomass in the year 1938. Bodenheimer was a German born Israeli entomologist who has contributed 420 works in 25 years in the fields of biology and agriculture.

The best way to draw a pyramid biomass is to draw it step wise. Let’s assume we are making a pyramid biomass on land. On the base would be the producers or the plants. Upwards, the next level would be the herbivores who are the primary consumers. The third level is smaller than the second level and would be your secondary consumers. The level above it are the tertiary consumers, a much smaller level. These are those animals which consume the animals below.

Both the biomass and energy pyramids are ecological pyramids which help scientists determine the health of organism populations by concrete measurements through these biology “infographics”, thus shedding more light and providing more derivations of the food chain. In order to understand the pyramid biomass and its calculations, it’s essential to define trophic levels. The position held by an organism in the food chain is its trophic level. The trophic level is thus, the number of steps it is from the start of the chain. It is interesting to note that the shape of the pyramid of energy remains unchanged by the shape of the pyramid of numbers.

The ecological pyramids came into being when the need arose to monitor and quantify organisms in each level to understand the flow of energy from one level to the other, ensuring that it occurs in a decreasing order, since it is used for life’s processes. Since organisms like plants do not require much energy, it is imperative that energy is more in organisms that move and eat them. It is important to note that energy is not destroyed, it is simply released into the environment as heat energy.

Owing to this consumption production cycle that the environment is based on, more food must be available in the lower levels so that the required energy is available. The ecological pyramids also show that the variety and number of species reduce in higher trophic levels, mostly. If you were to think about carnivorous predators like foxes, they have much less variety but require a wider area so as to consume enough like the rabbits and squirrels that are herbivores who come before them, though they are much larger in number and variety. Interestingly, the energy available to these herbivores is much more than what they provide to the predators like foxes.

The pyramid biomass is mostly determined in bars, to show the relative biomass at each trophic level. Now, the reason why there’s a subsequent decline of the reduction of biomass is because most of the food that is being consumed by an animal is not being passed on to the animal consuming it. The food is mostly, thus, lost as undigested waste or heat producing metabolism burns it up. An example would be, a deer excretes about 25% of the calories it intakes and out of the rest of the 75%, most of it is lost as metabolic waste. So out of the total calorie intake of a deer, less than 20% is actually transferred onto the animals that feed on the deer for their energy consumption.

The Difficulty in Determing Biomass Pyramids

It is a fact well known that very few pyramids of biomass have actually been determined. It is an incredibly tedious and tiresome process, even more than calculating the pyramid of numbers, but it can be safely said that most of them are indeed pyramidal in shape and not inverted. However, the pyramid biomass is very effective in determining the productivity of an ecosystem. One helpful thing to remember is that omnivores are always at the topmost rung of the pyramid biomass ladder.

This page was last updated on November 6, 2019.
By Mehk Chakraborty

What is a Biomass Pyramid?