Yellowstone National Park is one of America's most beautiful landscapes and a popular tourist destination. Located in Wyoming and extending into Montana and Idaho, many visitors flock to the Yellowstone National park to enjoy camping, hiking, fishing, and sightseeing.

The diverse range of fauna found in the park includes herbivores like elk, mule deer, sheep, pronghorns, mountain goats, as well as larger predators like coyotes, grey wolves, cougars, black bears, and grizzly bears. While most of these animals pose little risk to visitors, it’s important to stay alert and take precautions when there is the possibility of interacting with large predatory species. 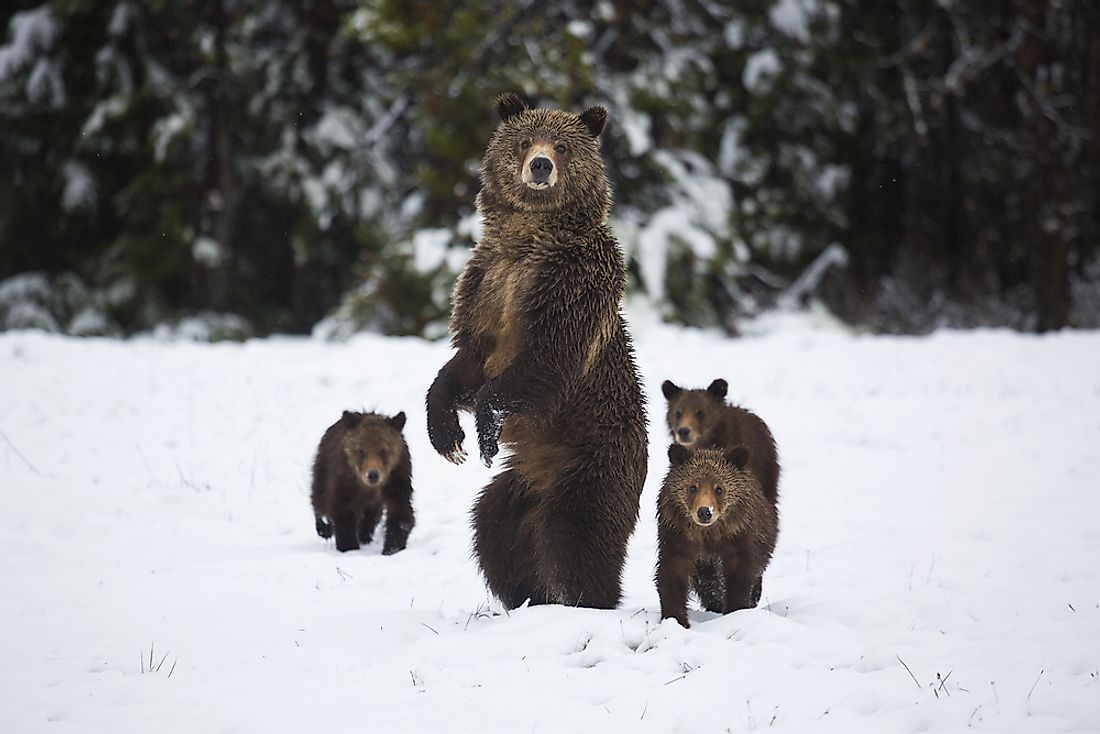 All bears can be potentially dangerous to humans. The two types of bears found within Yellowstone Park are grizzly bears and black bears.

The grizzly bear is more aggressive than the black bear and can be distinguished due to its larger frame, brown coat, and distinctive muscular shoulders. While the grizzly bear’s habitat used to encompass much of America’s mountains and prairies, they now only live in some small areas within the lower 48 states. Due to hunting as well as habitat damage and loss, grizzly bears were classified as a federally protected species from 1975 until 2017. Canada, northwest Montana, and  Greater Yellowstone are the only places where significant grizzly bear populations remain.

According to the National Parks Service, about 150 grizzly bears live in and around Yellowstone park, and 712 live in Greater Yellowstone. The times visitors are most likely to see a grizzly bear are dawn, dusk, and night.

Black bears are commonly seen throughout Yellowstone and are much smaller than grizzly bears. They are less aggressive, but can still be a danger as they are attracted to human food and garbage.

If you encounter a bear in Yellowstone Park, the best strategy to escape unscathed will depend on what kind of bear you are dealing with.

What To Do If You See A Black Bear? 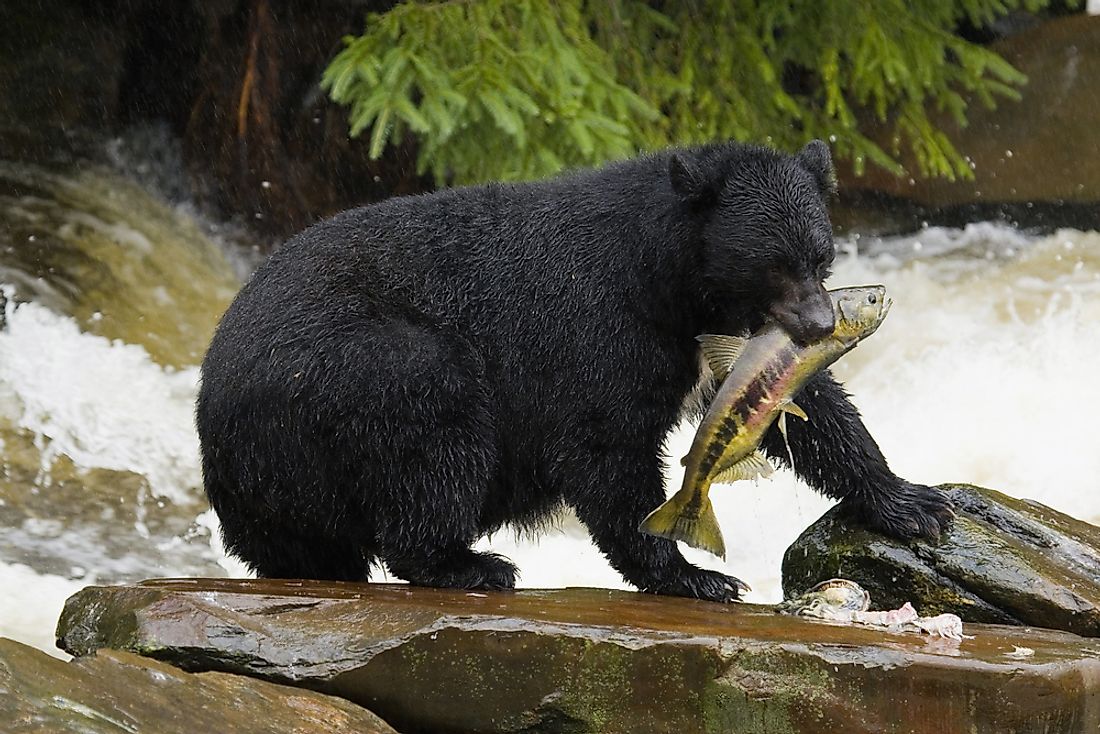 Black bears will be easier to deal with than grizzlies, which are bigger and more aggressive. Black bears can associate people with food, and lose their natural fear of people. Garbage, packed food, greasy barbecues, pet food, and even consumables like toothpaste all have a possibility of attracting bears. Sealing anything a bear may try to eat in air-tight containers and bear barrels is a good way to prevent black bears from rustling around your camp.

Black bears have poor eyesight. In order to prevent accidentally surprising a black bear, make noise while you’re out in the park. This will alert bears in the area to your presence, hopefully deterring black bears who might cross your path. Singing, clapping, whistling, or other noisemaking is useful. You can also attach a bell to your backpack.

If these preventative measures fail and you are face to face with a black bear, it is important to keep your cool and remain calm. Do not panic, turn around, or run away. Predators like black bears will instinctually chase anything running away. They are impossible to outrun. Do not attempt to get away by climbing a tree, as they are excellent tree climbers. Black bears are naturally curious, so they may just be interested in smelling you. Back away from the bear slowly, without taking your eyes off the bear, and place any clothing or items you have on the ground as you retreat. The black bear will likely stop to have a sniff of your things. Putting down a hat, coat, backpack, or camping equipment for the bear to smell gives you a chance to get away.

Stand your ground against a black bear. They may bluff an attack. Black bears may run up to a person, stomp at them, then run off without touching the human. While it is not easy to tell if the black bear is truly bluffing or not, it is important to make yourself appear large and unmoving in order to deter a true attack.

If a black bear attacks you, fight back. Make as much loud noise as you can while using all your might against the bear. The eyes and snout are the most vulnerable. If you have bear spray or another type of pepper spray, use it. By hitting the bear in the face with your hands, fists, teeth, or any rocks, sticks, or another weapon you can find, the black bear may give up. Once you have demonstrated that you are willing to fight to the death, the black bear will likely leave.

What To Do If You See A Grizzly Bear 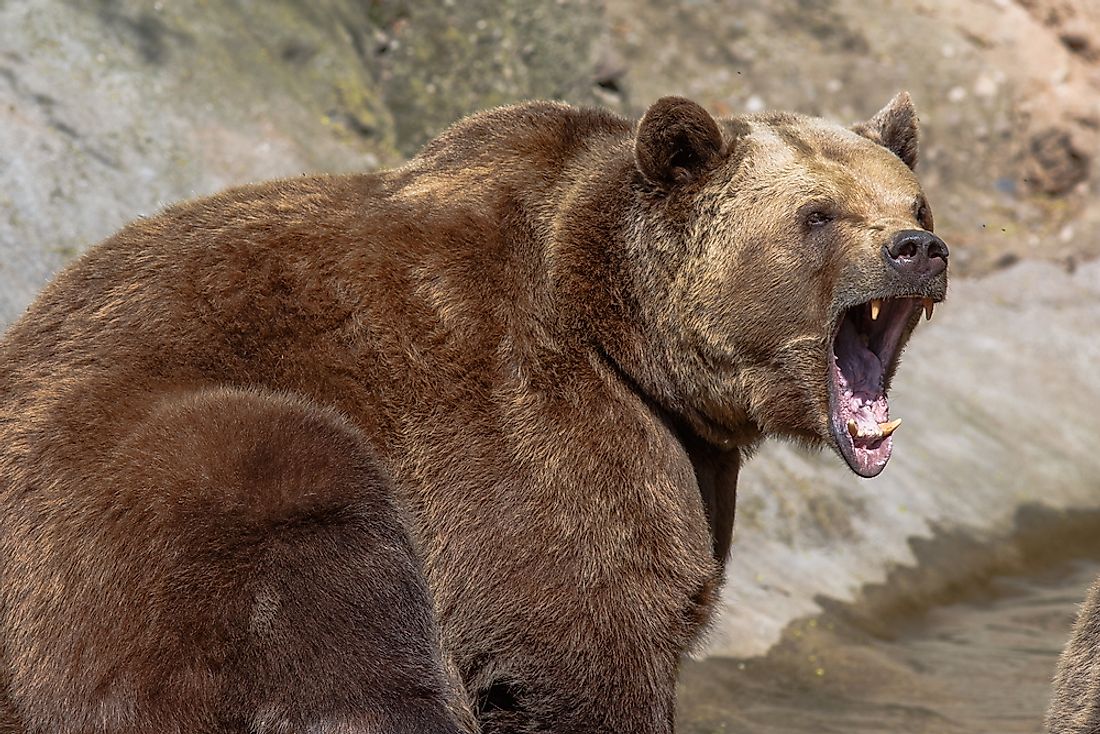 Like with black bears, being careful with food storage and smells can help prevent grizzly bears from being attracted to your campsite. Making noise while in the park can also help prevent you from finding yourself close to a bear. Unlike black bears, grizzlies can occasionally identify humans as prey if they are injured, sick, or too young to know better.

If you end up seeing a grizzly bear, do not run away. They can run faster than an Olympic sprinter so you can’t outrun them. Remain calm and do not yell.

Try to not look threatening while backing away. Do not make eye contact and use a quiet, soothing voice to talk to the bear. You cannot scare off a grizzly with loud noise or looking big. Try to appear small and nonthreatening. If the bear is far away, take another route and try to get away. If the bear 50 to 100 yards away, it is close enough to charge you.

If a grizzly bear charges you, use bear spray. If you don’t have any, do not fight back. Fighting back will only make the bear angrier: it is time to play dead. Lay on your stomach face down on the ground. To protect your neck, interlock your fingers over the back of your neck. To ensure the bear doesn’t flip you over onto your back, spread your legs wide apart. Grizzly bears will usually leave you alone once they realize that you are not a threat. If the bear is actively trying to eat you (which is rare), you can try to fight back, but this is the last resort as they are almost impossible to fight off.

Where do Black Bears Live?

Black bears, who are excellent tree climbers, are considered to be the North American continent smallest, yet most widely distributed, bear species. Their population, by some estimates, approaches 1 million strong and has been helped along by game and nature preserves and parks in Mexico, the United States, and Canada alike.

Where Do Grizzly Bears Live?

This page was last updated on February 11, 2020.
By Kathleen Allan

A Survival Guide: What To Do If You Encounter A Bear At Yellowstone National Park